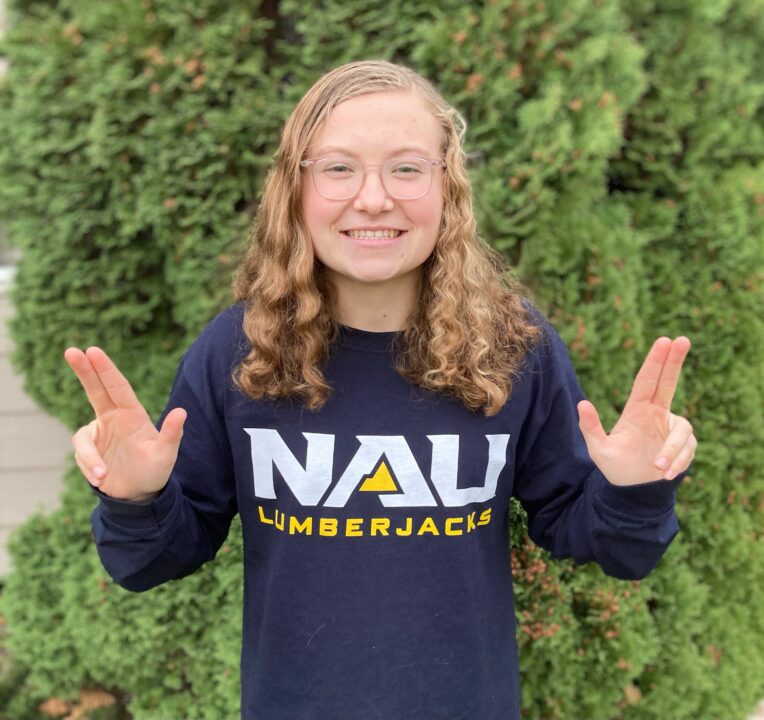 Futures finalist Samantha Sheridan will travel from Montana to Arizona as she has committed to Northern Arizona University beginning in fall 2022. Current photo via Sean Marshall

Samantha Sheridan from Billings, Montana has announced her commitment to continue her academic and athletic careers at Northern Arizona University beginning in the 2022-2023 school year.

Her Billings Aquatic Club head coach Sean Marshall spoke of her saying, “Samantha has had a massive development curve the past 3 years as she has went from a Montana State Qualifier to a Futures Finalist and just 5 seconds off of a Junior National cut in her Mile (17:30 LCM), she has been awarded our Hardest Worker Award for the past 5 years straight and her times and strong development have clearly shown that her hard work is paying off, we are very proud of what she accomplished and look forward to watching her continue to have success in the future as a Lumberjack!”

She has progressed immensly in the distance events over the last few years. See her progression below:

Northern Arizona University is a public university located in Flagstaff, Arizona. The school is a member of the Western Athletic Conference (WAC). The team captured the conference title at the 2021 WAC Championships.

Based on her best times, Sheridan has the potential to make an immediate impact for NAU. Her best time would place her in the top 16 of the 1650 freestyle. She is just off the top 16 in the 500 freestyle as it took 5:07.87 to make it back in the scoring ‘B’ final.

Sheridan will arrive on campus next fall as a member of the class of 2026 along with Nicole Kepl, Gracie Munk, Remi Wallace, and Cydnie Perkins.