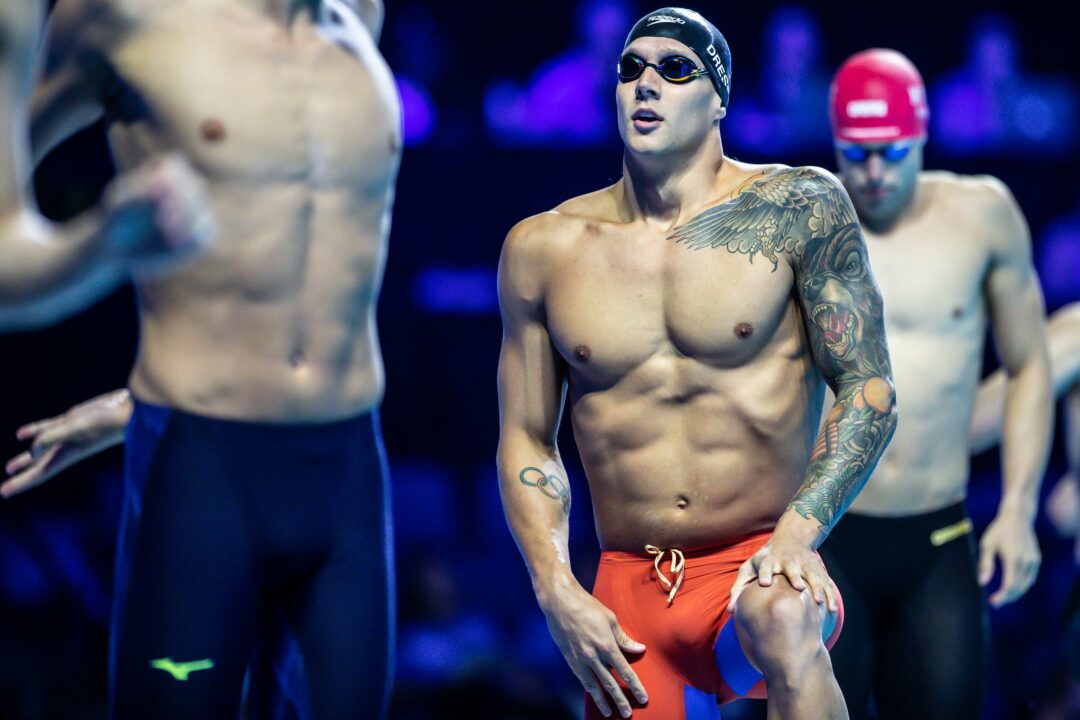 We got a slew of new Olympians on day 5 - and based on our math, all second-place finishers could be officially selected as soon as tomorrow night. Archive photo via Jack Spitser/Spitser Photography

Caeleb Dressel‘s event selections made fans wait until day 5 – but Dressel is officially returning to the U.S. Olympic team in 2021.

The 13-time World Championships gold medalist won the 100 free tonight, booking his trip to Tokyo in both the individual 100 free and as a member of the 4×100 free relay. His swim should also give him a spot on the U.S. men’s 4×100 medley relay, though he may wind up swimming butterfly instead of freestyle. The 24-year-old Dressel is the world record-holder in the 100 fly and will swim heats of that event tomorrow.

On the women’s side, there was just one final and no ‘new’ Olympians. That’s because the top two 200 fly spots went to Hali Flickinger and Regan Smith, both of whom were already locked into likely Olympic berths. Flickinger won the event and made her Olympic return official – she was second in the 400 IM on day 1 and will make the team there, but would have needed the U.S. to stay under the 26-woman roster cap to officially join the team. Smith won the 100 back and is now locked into two events.

The men, meanwhile, added five new names as Olympic locks, and three more as very likely Olympians. Zach Apple was already in line for an Olympic spot, but is now locked in as an individual 100 freestyler. Previously, he was a relay-only 200 freestyler counting on the U.S. men getting under the roster cap to secure a berth.

800 free winner Bobby Finke is in as a first-time Olympian. So is 200 breast winner Nic Fink. Blake Pieroni and Brooks Curry will join the official Olympic team as relay-only 100 freestylers.

Andrew Wilson was already a likely qualifier, and he added a second event in the 200 breast. Michael Brinegar is now a likely Olympian after taking second in the 800 free. Bowe Becker and Ryan Held were 5th and 6th in the 100 free – they’ll join Patrick Callan as the three lowest qualifiers in Olympic priority, but we’d still expect them to officially make the team.

Tentative qualifiers (who need a certain number of multi-event qualifiers to be officially added) are listed in italics.

Here’s an overly-simplified version of the U.S. Olympic selection process: the team can have a maximum of 26 men and 26 women. Swimmers are added to the roster in these priorities until the roster cap is hit:

Tomorrow could officially lock in all of the second-place finishers on the women’s side. If either Kate Douglass or Allison Schmitt places in the top 6 in the 100 free final tomorrow night or if Lilly King places in the top two of the 200 breast, the women will hit 6 doubles and all second-placers can breathe a sigh of relief as their Olympic spots become guaranteed.

If none of those things happen, the women will have to wait for Saturday night, when Regan Smith and Rhyan White are among the favorites in the 200 back and where Ledecky should win the 800 free, potentially locking in event the 5th- and 6th-place relay-only athletes.

For the men, tomorrow night has fewer spots up for grabs, but plenty of potential doubles. That includes Ryan Murphy in the 200 back and Michael Andrew, Chase Kalisz and Andrew Seliskar in the 200 IM. If current seeds hold and Murphy, Andrew and Kalisz are all top two tomorrow, the men will hit six doubles and all second-placers will be officially added to the team.

Especially now that he has seemingly scratched the 100 fly. Was looking like he was going to get that second spot.

This 26 person team cap is stupid and needs to go. Knowing FINA, that means it will probably ho to 20.

It’s unlikely due to how the IOC limits the number of athletes per federation. Lifting the cap would invariably mean fewer selections at the bottom of the swimming stack (swimmers invited with OST/B cuts), which would make smaller countries unhappy. Plus since it would be seen as favoring the US more than anyone else, it’s likely a non-starter.

Don’t think that the 26 person cap is something new. At least we us the FINA A cut instead of what several nations who choose to use 8th or 12th place time from the prior World Championships.

Wouldn’t Ledecky take a 4×2 spot, which makes 6 doubles for women? Same with Kieran…why is 4×2 listed as a double for Madden and Apple?

Madden and Apple are “relay-only” qualifiers for the 4×2.

Anyone finishing top two in the individual 100/200 free don’t count twice for relays.

By also finishing second in individual events Madden and Apple are each covering two of those 32 spots.

body surfing is a skill

Seems like all 2nd are now assured for men and women; working on relay 5th and 6th tomorrow. Ledecky and Dressel are money in the bank!