David Plummer Goes 5th Fastest Time Ever in 100 Back 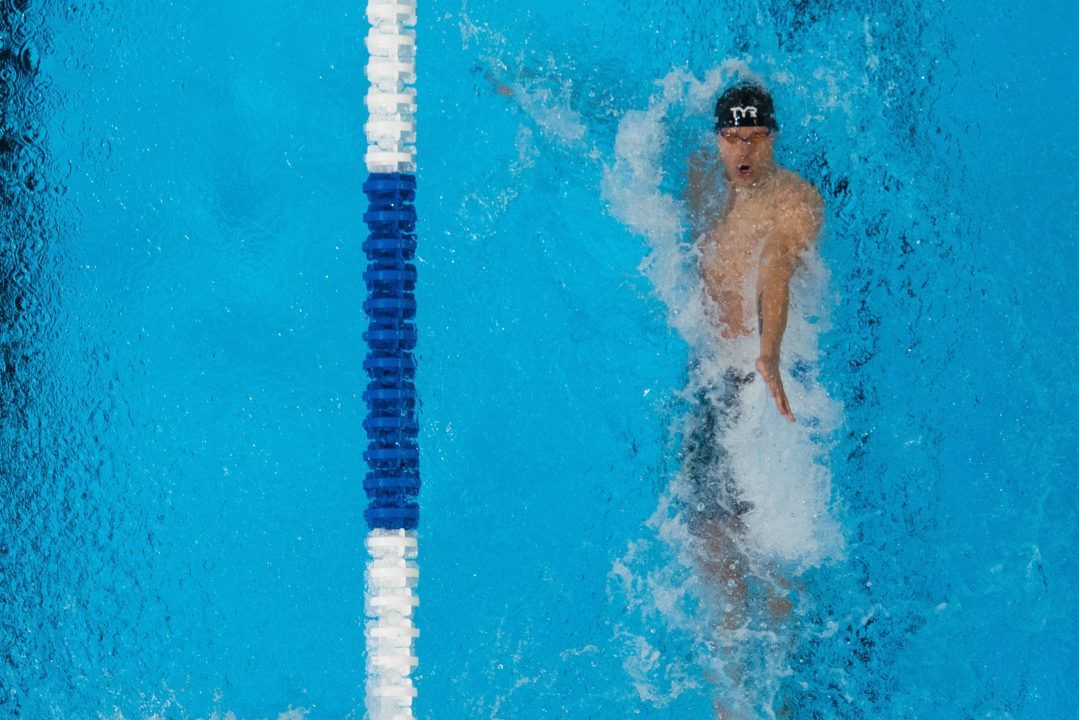 In semifinal two of the men's 100 back in Omaha, Minnesota alumnus David Plummer erupted for a new lifetime best, world-leading time, and fifth fastest swim ever of 52.12 to win the heat. Current photo via Mike Lewis/Ola Vista Photography

In semifinal two of the men’s 100 back in Omaha, Minnesota alumnus David Plummer erupted for a new lifetime best, world-leading time, and fifth fastest swim ever of 52.12 to win the heat.

Plummer, who came in with a very recent lifetime best of 52.40, beat Matt Grevers in his heat, with Grevers touching 2nd in 52.64. Plummer was also quicker than Ryan Murphy, who swam a 52.28 to win the first semifinal.

Plummer now leads the world with his time, and Murphy sits at second. Plummer, Murphy, and Grevers go in 1-2-3 to the 100 back final, which looks like it’ll be THE race of the meet. The world and American record of 51.94 held by Aaron Peirsol is not far away.

Peirsol’s record is well in reach– Plummer and Murphy were both under WR pace at the 50 mark. Tomorrow night’s final will be electric, and the two selected athletes will prepare to take on Aussie Mitch Larkin in Rio.

Man I’m already nervous for tomorrow. As much as I like all three guys, I really hope Plummer can pull it off.

Yeah same here he has been around so long. Murphy has a good chance and their will be other chances for him

I haven’t been able to watch any of the races but know Plummer got killed on the UW in 2012. How did he look this race? Grevers has already done so much in this sport I am definitely pulling for Plummer this time around. Don’t really care who gets second.

Very good. Murphy and Grevers still a little better though. Plummer is undeniably the best on top of the water, imo

yes, in 2012 i thought he was by far the fastest swimmer of the stroke… if only there were no turns in the race he’d be best all time

Agreed, but based off of the race tonight he has been focusing on his dolphins. Not perfect, but still better than everybody in his heat except maybe Grevers. Just think though, all three of those guys have now been within .24 of the WR. If Plummer is now 5th all time, I would assume Murphy is 6th with his 52.1 from last year. Three of the top 6 ALL TIME in one heat, and one won’t make it. It’s gonna be good.

it’s really a shame. in 2012 plummer could have won the bronze medal if they could bring 3 from the US. it’d be the same this year i’m guessing.

SHEHULKSWIM, that’s unfortunate you haven’t been able to watch. Won’t HULKSWIM let you near the computer, phone, tablet or TV?

His start wasn’t great in 2012 either. Plummer has historically had some trouble with slipping on the start, and I think the backstroke ledges are allowing him to really go for it on the start.

Plummer has the perfect tempo and turnover rate for the 100 back. I hope he gets both the WR and the win tomorrow night.