DATA VISUAL: The Breakdown of Texas and Stanford Battling for 2nd Place 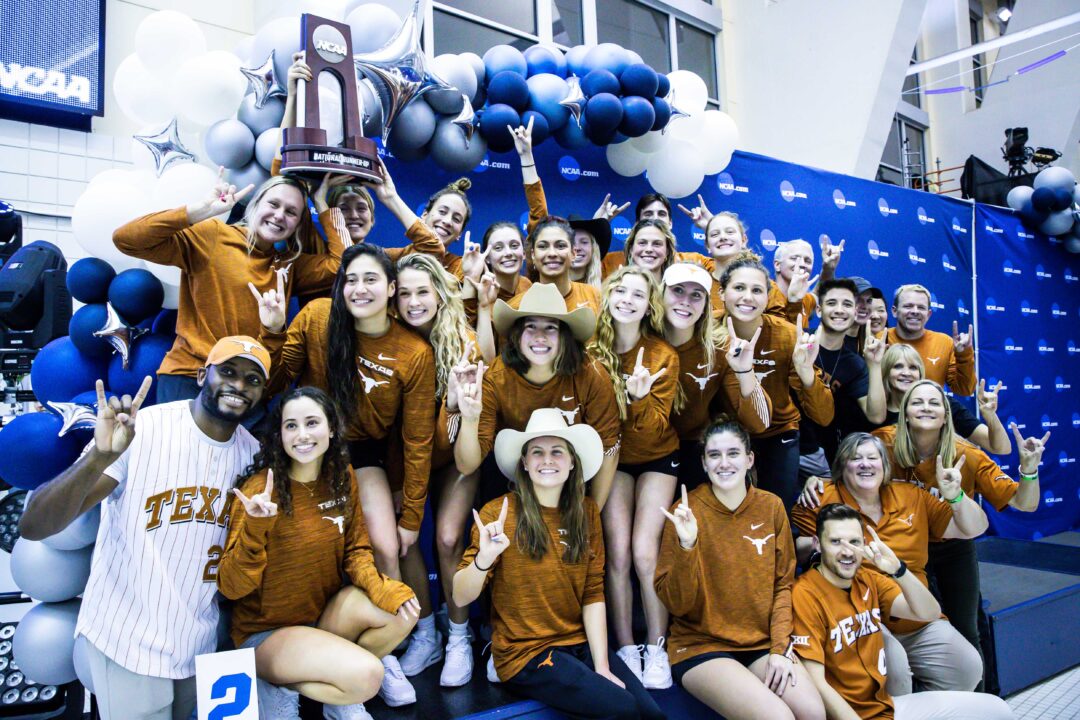 Take a closer look at the breakdown of Texas and Stanford battling for 2nd place at the 2022 NCAA Division I Women's Swimming and Diving Championships. Current photo via Jack Spitser/Spitser Photography

While all eyes were on Virginia’s dominant performance at the 2022 Women’s NCAA Division I Championships, there was a back-and-forth battle between Texas and Stanford for 2nd place that lasted throughout the meet. Let’s take a closer look.

Stanford moved into 3rd place after the 500 freestyle on Day 2 after Brooke Forde finished 4th and Morgan Tankersley finished 8th, collecting 26 points. Texas also had a solid showing in the 500 freestyle with Erica Sullivan finishing 3rd and Evie Pfeifer finishing 5th, which out-scored Stanford in this event by four points. Next, Texas’ Kelly Pash brought in 14 points with her 5th place finish in the 200 IM, but Stanford’s Torri Huske finished 2nd, picking up 17 points. Neither Texas nor Stanford had any finalists in the 50 freestyle, the only time in the meet when this occurred.

Texas maintained its spot in 2nd place, receiving a boost from Hailey Hernandez who finished 4th on the 1 meter, while Stanford had no diving finalists. In the 200 freestyle relay, Stanford was 6th and Texas was 12th, By the end of Day 2, The Longhorns had a 5 point lead over the Cardinal: Texas had 128 points while Stanford had 123.

On Friday, Day 3, the two teams kept trading time in 2nd place. After the 400 IM, Stanford was in 2nd place after Forde took 2nd in the event, picking up 17 points, making the scoring difference 12 points. At the 100 butterfly, Texas closed the gap to just 2 points after the Longhorns picked up 27 points in the event with Emma Sticklen and Olivia Bray, which out-scored Stanford’s lone finalist Huske, who finished 2nd and collected 17 points.

The momentum swung in the Cardinal’s favor after the 200 freestyle. Stanford had three A-Finalists, led by NCAA Champion Taylor Ruck, Lillie Nordmann (4th) and Tankersley (8th), picking up 46 points for Stanford. Pash of Texas picked up 16 points for finishing 3rd.

In the 100 breaststroke, Anna Elendt’s 5th place finish brought in 14 points for Texas. Stanford did not have any finalists in this event, which was a huge boost for Texas.

Stanford’s three finalists in the 100 backstroke brought in 29 points, led by Regan Smith who finished 3rd. Ruck and Lucie Nordmann finished 10th and 11th, respectively. Texas only had one finalist in this event, Bray, who finished 8th.

Texas had three divers compete in the 3 meter final. Paola Pineda, Hernandez, and Jordan Skilken finished 6th, 8th, and 10th, respectively, picking up 31 points for the Longhorns. Stanford’s lone finalist was Carolina Sculti who finished 7th, which brought in 12 points.

Stanford and Texas finished 3rd and 4th, respectively, in the 400 medley relay. Heading into the final day of competition, Stanford finished Day Three with 276 points, while Texas had 257 points, a 19 point separation.

On Day Four, Sullivan and Pfeifer of Texas moved up from their 9th and 11th seeds to take 2nd and 4th respectively in the 1,650 freestyle. Both Longhorns swam in the final afternoon heat of the mile, which got Texas rolling into the final session of the meet. Stanford picked up points for 15th with Aurora Roghair. Texas passed Stanford for 2nd after the 1,650 freestyle, 289 to 278 points, respectively.

However, after the 200 backstroke, Stanford was back in 2nd place. Smith of Stanford won the event, while Lucie Nordmann was 8th, and Ruck was 9th, picking up 40 points. Cook of Texas was the Longhorns sole representative in the event, finishing 14th, bringing in 3 points. Stanford now had 318 points, while Texas had 292.

Texas did not have any swimmers in the 100 freestyle final. Huske of Stanford won the B-Final. Her time from finals (46.98) would have been 4th in the A-Final. The Cardinal now had a 35 point lead over the Longhorns.

Elendt of Texas taking 2nd in the 200 breaststroke brought in 17 points for her team. Meanwhile, Stanford grabbed 13 points in the event with Forde and Allie Raab finishing 7th and 15th, respectively. Texas trailed Stanford by 31 points with three events remaining in the competition.

Texas put three swimmers into the A-Final of the 200 butterfly: Pash (5th), Sticklen (7th), and Bray (8th), picking up 37 points for the Longhorns. Smith and Lillie Nordmann of Stanford were 2nd and 9th, picking up 25.5 points. Heading into platform diving, the Cardinal had 365.5 points, while the Longhorns had 346, a 19 point gap.

Texas put three divers into the A-Final of platform diving: Skilken, Boyle, and Pineda, who finished 3rd, 4th, 8th. Heading into the diving final, this trio qualified 6th, 7th, and 8th, so the extra boost out-scored the psych sheet and brought in big points for the Longhorns. Stanford had no diving finalists. Heading into the 400 freestyle relay, Texas was ahead of Stanford by 22.5 points.

With one event to go, the 400 freestyle relay, Texas could secure a 2nd place team finish with at least 9th place swim. Swimming in heat three, the Longhorns finished 2nd. Stanford swam in heat four, finishing 2nd to Virginia, while Texas’ time held on for 9th in the overall standings, securing the Longhorns a 2nd place team trophy. At the end of the competition, the difference between Texas and Stanford was 6.5 point gap.

The ladies horns have learned from the men- diving saves the day.

I think a similar one for NC State vs Alabama would be good as well. That team race for the last trophy was incredibly close and came down to the last couple of events