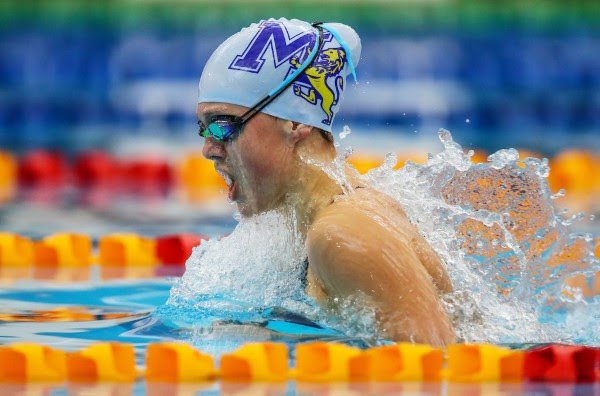 16-Year-Old Brearna Crawford kept her foot on the gas on the third day of racing at the 2019 New Zealand Age Group Championships adding a third New Zealand record and gold medal to her tally for the meet.  Archive photo via Swimming New Zealand

16-Year-Old Brearna Crawford kept her foot on the gas on the third day of racing at the 2019 New Zealand Age Group Championships adding a third New Zealand record and gold medal to her tally for the meet.

Crawford’s record came in the heats of the 50m butterfly where she dropped 0.45 to set a new mark of 26.92 besting the mark set by World Championships swimmer Sophia Batchelor in 2012. She backed up the swim in the final with a 27.00 to take a comfortable win over United’s Alice Waldow. Crawford is still to race in the 100m Butterfly, the 100m Breaststroke (in which she holds the 15-year-old age record) and the 200m IM.

Fresh off equalling his lifetime best in the 100m freestyle, 16-year-old Michael Pickett bested his own 16-year-old national record leading off the 16 & over men’s 4x100m freestyle relay for North Shore. Pickett touched in 50.62, narrowly ahead of his own previous mark of 50.68. His lifetime best however sits at 50.61 when he was 15 but he is yet to race the 100m here individually. North Shore finished 2nd in the relay on the back of his split.

Also continuing her record breaking form was 15-year-old Erika Fairweather of Neptune. Fairweather broke her 3rd national record of the meet in the 200m freestyle – setting a new mark in the heat of 2:01.94 before blasting a 2:00.01 in the final to pick up her 4th gold of the meet. The time qualifies her comfortably for the World Junior Championships and would’ve placed 7th at the 2017 championships. It also is faster than the 16, 17 and 18-year old national records including those of 2015 World Championships silver medallist Lauren Boyle.

At the end of Day 3 the top 5 club points remain unchanged with North Shore leading the way with 1259.5 points. They are followed by United with 801 and Howick Pakuranga not far behind with 771.5. Evolution Aquatics have closed the gap and are now sitting on 739 with Capital in 5th on 685.