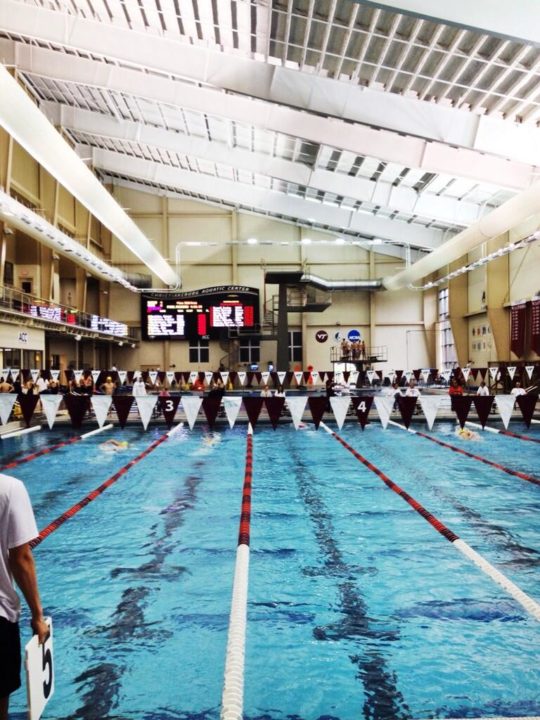 Virginia Tech will be hosting six teams over the next three days in their Invite of the season. (Photo Credit: Kimberly Fleming's Twitter) 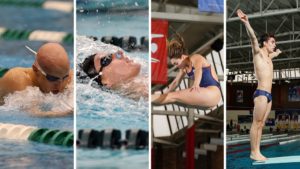 UIC’s Felix LaFortune and Cydney Liebenberg each earned their third consecutive Horizon League Diver of the Week awards for the UIC Flames.

Virginia Tech is hosting William & Mary, UConn, Liberty University, Ohio University and University of South Carolina through Saturday night. The meet is following an NCAA format, with relays swum as timed finals, and top 24 swimmers making it back each night. Here’s a recap of night number one from the Christianburg Aquatic Center.

William and Mary’s team of Megan Howard, Jaimie Miller, Noelle Klockner and Greta Schneider took the event in a time of 1:32.19. Howard lead off with a 22.60, and Miller followed her with a 22.78 relay split.

Freshman Jessie Hespeler topped the event in a time of 4:49.91, just off her prelims time of 4:49.79. She had a good race from South Carolina’s junior Victoria Mitchell at 4:50.08. Hespeler had a lead at the start but Mitchell began to reel her in towards the end of the race, but it wasn’t enough to keep her off in the last 50.

Rachel Sepanski, a senior from VT, rounded out the top three with a time of 4:54.83.

Two South Carolina seniors registered NCAA B standards in the 500 freestyle tonight. Michael Flach won the event in a time of 4:21.38, with his classmate Gera Rodriguez in second at 4:23.92.

Freshman Fiona Donnelly won the event for Virginia Tech. She had a great split at the 100, hitting the wall at 55.52, but finished at 2:00.91 – which is an NCAA B standard. Though, her 36.83 50 breaststroke split hurt her considerably, and if she can improve that just a little, this could be a great event for Donnelly.

Her teammate Weron Paluszek was second in 2:01.16, also an NCAA B standard. Paluszek was three seconds behind Donnelly, but she split 32.91 on the breaststroke, and took the lead into the final 50. But Donnelly outsplit her 28.56 to her 29.66 on the final 50.

Another strong freshman showing from the Hokies was Jan Switkowski here in the 200 IM, registering an NCAA B standard and a win in a time of 1:45.95. Sophomore Lucas Bureau was second in 1:49.47.

After a great lead off in the sprint relay to kick off the session, Howard came back even stronger in the individual 50 race. She cut off another .2 from the relay, hitting the wall here in 22.43.

Out of the B final, Miller from William and Mary, finished in 23.16, the fourth fastest time overall.

Eric Lethander from South Carolina was fourth, .5 behind at 20.68.

Virginia Tech women lead the way on the team race, with 419.5 points. South Carolina is in second at 214.5 points.

South Carolina hung with them through the first half, with Jay Warner at 48.33 and Jared Kauffman at 55.35, but they fell off at the butterfly leg of the race. Rounding out their relay was Sam Lynch, 48.72, and Kevin Leithold, 43.45.

Virginia Tech leads the way in the men’s meet, with 424 points over South Carolina, who has 290 points.

The meet will continue tomorrow with prelims of the 400IM, 100 butterfly, 200 freestyle, 100 breaststroke and 100 backstroke being contested at 10AM. Finals will follow with those events, plus the 200 medley relay and 800 freestyle relay at 6PM.

That 53.33 100 fly split is even more impressive considering Liberty’s Jess Reinhardt was in a practice suit. If fact their whole team is racing apparently not shaven/tapered/suited.