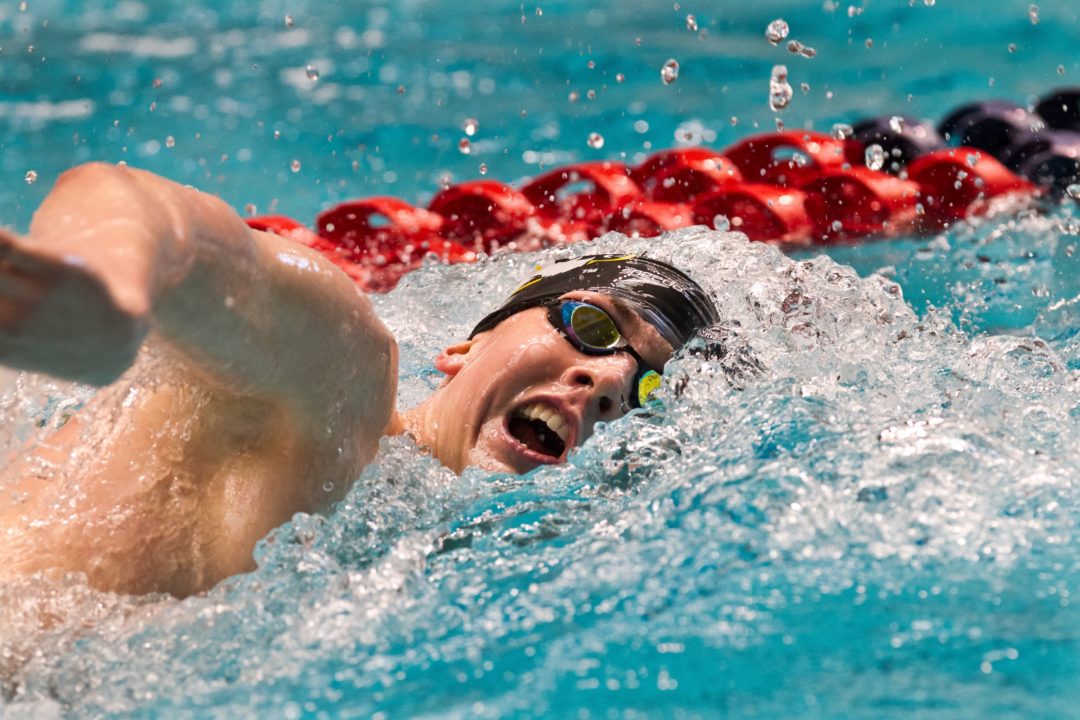 At the time he finished, Missouri's Eegan Groome was the fastest 500 freestyler in the country by over four seconds. Archive photo via Tim Binning/TheSwimPictures.com

To be honest, this was supposed to be a rebuilding year for the Missouri Tigers women’s squad that was 14th at NCAA’s last year. After the graduation of Cassie Cunningham and Dominique Bouchard, the team’s two anchors, Missouri was lacking an identity.

They’ve found that identity mid-season, though, as the new generation of Missouri women have picked up the torch and run with it, and their sprinters looked really good on the first day of their home invitational.

The men’s 200 free relay was equally as close, but this time it didn’t go the Tigers’ way. The men from West Virginia took the win in 1:19.50, as Ross Glegg ran down Missouri’s anchor Max Grodecki to make up a half-second deficit on the final leg with a 19.59 split.

Both relays were very good, but West Virginia had that 4th leg to finish things off. Missouri had three legs under 20 seconds, including a 19.7 leadoff from Logan Mosley and a 19.6 second leg from Sam Tierney, but they couldn’t get the 4th that they really needed.

Dani Barbiea, after swimming an automatic qualifying time in prelims, wasn’t quite able to match that time, but she did swam a 51.6 in finals, giving her the two fastest times in the nation, and two swims under the NCAA Automatic Qualifying Standard.

West Virginia’s Julie Ogden took 2nd in 53.67, which is a lifetime best for her. Utah sophomore Petra Soininen, a Finnish National Champion, was 3rd in 53.77.

Missouri’s Anna Patterson, who ended up being an exhibition swim, was the second-fastest swimmer with a 53.59, but her swim didn’t count for points.

Missouri’s Logan Mosley won the men’s 100 fly with relative ease, posting a 47.15 that pushes him to 2nd in the nation. That topped West Virginia senior Bryce Bohman, who was a 48.29 for 2nd.

Missouri’s Eegan Groome qualified for NCAA’s last season only as a part of their 800 free relay. This year, he shouldn’t have to sweat too hard about an individual invitation, after winning the men’s 500 free here in 4:17.78. With results rolling in around the country still, as of the finish of his race, Groome’s was the best swim in the country by over four seconds.

The FIU Panthers got in a big swing in the women’s 200 IM. There, veterans Johanna Gustafsdottir and Sonia Perez Arau went 1-2 in 1:58.27 and 1:58,65, respectively.  Not only are those NCAA “B” qualifying times, it is each swimmer’s lifetime best in the event (for Arau, by about three seconds). Gustafsdottir is a bit better on the front-half of her IM, while Arau is a bit better on the back-half of hers.

The splits indicate that both shoul dbe set up for very good swims later in the meet.

The Panthers’ streak was broken by Missouri freshman Katharine Ross, who was 3rd in 2:00.28, and another Tiger Abby Duncan, an Auburn transfer, in 2:00.66.

Missouri’s got a very good men’s breaststroke group, and those breaststrokers also happen to make for a very good IM group. Sam Tierney won the race in 1:45.24, with Igor Kozlowskij taking 2nd in 1:45.74.

Patterson backed up her impressive relay split with a 22.51 to win the women’s individual 50 free. Utah’s Traycie Swartz, though, gave her a good run with a 22.57 just behind for 2nd.

Barbiea, who was the top seed in prelims, scratched the final.

Utah’s Nick Soedel, who was .01 seconds shy last season of making the NCAA A-final, is already almost back to the same time that he was last year. He won the men’s 50 free running away, albeit against a field not thick with good sprinting men’s teams, in 19.51 – and reports are that he’s not shaved for the meet.

Max Grodecki had a much better swim than he did finishing off the relay earlier, as he flat-started a 20.29 for 4th.

While the Tigers graduated all but the fly leg on this relay last year, they’re already almost two seconds better than their best time from last season. Doucette can’t match the All-American Bouchard on the backstroke leg, but she did swim a lifetime best in that leadoff, and if the rest of this relay continues to swim this well, the Tigers will be more-than-happy with a 54-low from her. Ross, Barbiea, and Patterson combined to be about four seconds better, combined, than their counterparts from last season.

The Razorbacks don’t look quite as sharp this year as they did at the Phill Hansel Invite at Houston last November, though the 1:00.18 breaststroke split from Daniels was a good one.

The Missouri men not only won the 400 medley by four seconds, they actually put together the top two relays in this race.

The Tigers’ breaststrokers were very good, including a 52.45 from Tierney on the A-relay, but the backstroker is what really stood out on this relay: Logan Mosley led off the A in a split of 46.60. This Missouri team is a very well-rounded one. It hasn’t taken much to make them a better relay than last year; they’ve got the same swimmers as last year’s medley, they’ve just reordered them:

The biggest upset of the first night of the meet came in the men’s 1-meter, where Utah sophomore Jacob Crayne upset the defending SEC Male Diver of the Year David Bonuchi 344.80-336.25.

The Southern Illinois Salukis didn’t have many A-final swims on the first night of this meet, but they do have an outstanding diving corps. Cheri Zhang won the women’s 3-meter handily with 389 points, while Esther Chen took 3rd in 302.50. Those two are both Chinese natives.

They sandwiched Missouri’s Lauren Reedy who had a score of 345.15. Missouri All-American Loren Figueroa didn’t dive at this meet.