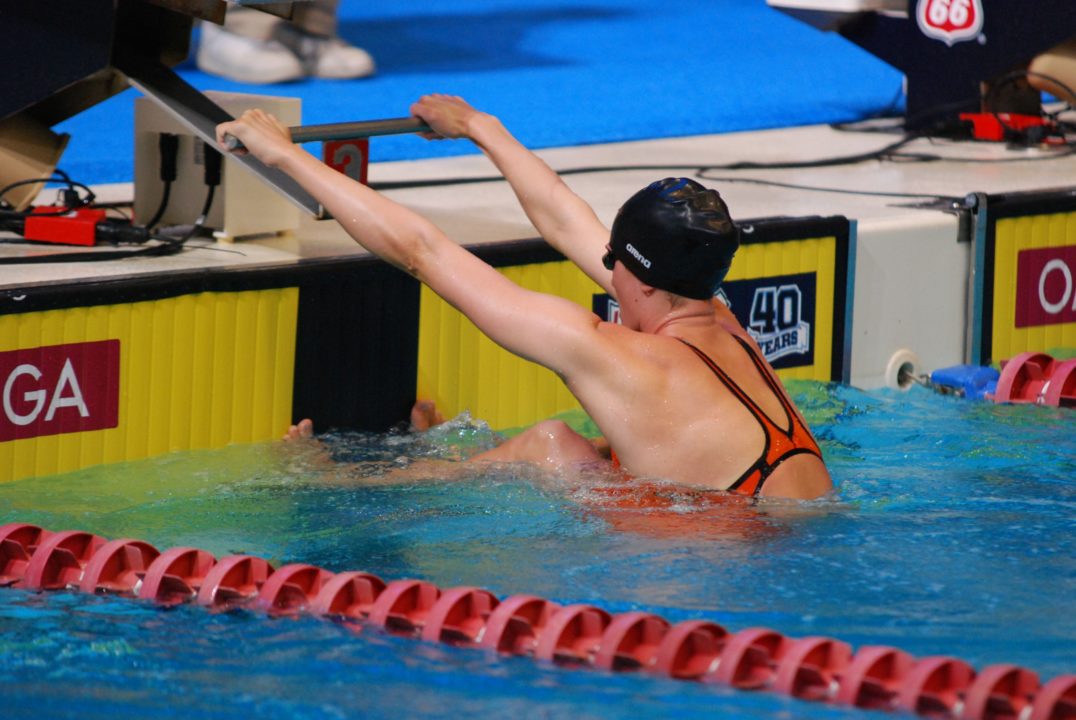 Cheyenne Coffman is in the hunt for a pair of titles heading into the final night of the Speedo Grand Challenge in Irvine, California. Archive photo via Tim Binning/TheSwimPictures.com

Cheyenne Coffman is in the hunt for a pair of titles heading into the final night of the Speedo Grand Challenge in Irvine, California.

Coffman, a Fresno Pacific grad who now trains at Fresno State, is the top seed in the 100 back and is in the final of the 100 free after winning the 50 on Friday night.

BJ Johnson put up a strong 2:16 to lead the men’s 200 breaststrokers, and his impending battle with 100 breast champ Mike Alexandrov is just one of a number of great races shaping up for Sunday night finals.

A reminder: the top 4 athletes in each event make the championship final, with the top 3 earning money at night. The following 16 swimmers compete in tradition, 8-man finals, distinguished as the “A consolation” and “B consolation.”

Cheyenne Coffman won the 50 free on day 1, and now she’s in the hunt for the 100 back title on day 3. The Fresno State pro went 1:02.81 for the fastest seed, but things are tight at the top. USC’s Kendyl Stewart is just .06 back at 1:02.87 and Stanford’s Felicia Lee is lurking in third with a 1:02.98. In what will be a four-way showdown between students or alums of different big-name California colleges, UCLA’s Madison White joins the field with a fourth-seeded 1:03.02.

For the men, USC’s Chase Bloch leads the 100 back. His 57.30 is the fastest morning swim, but this should be another close one: fellow Trojan Jacob Toumarkin is 57.55 while Texas A&M commit Brock Bonetti went 57.70 for third. Aquazot 16-year-old Danny Tran joins them in the final.

Stanford pro Bobby Bollier was the fastest qualifier in the men’s 200 fly. Bollier went 2:00.30 to stay just head of the 2:00.77 put up by last night’s 400 IM winner Corey Okubo. Mickey Mowry and Cary Wright are also into the final.

It’s a rematch of last night’s 200 free final in the women’s 100 tonight. Andi Murez got the top seed in 55.91, hoping to avenge her loss last night to Karlee Bispo in the longer distance. Bispo is the two-seed at 56.07. Cheyenne Coffman will look for another big finals swim in this race, sitting third at 56.08, and remember, she won the 50 free earlier this weekend and might have the best short speed of this field. Another dangerous contender is Stanford’s Lia Neal, who took fourth with a 56.10.

Stay tuned for a full recap of the final session tonight.