Cody Miller Reflects On The History Of ‘Duel In The Pool’ 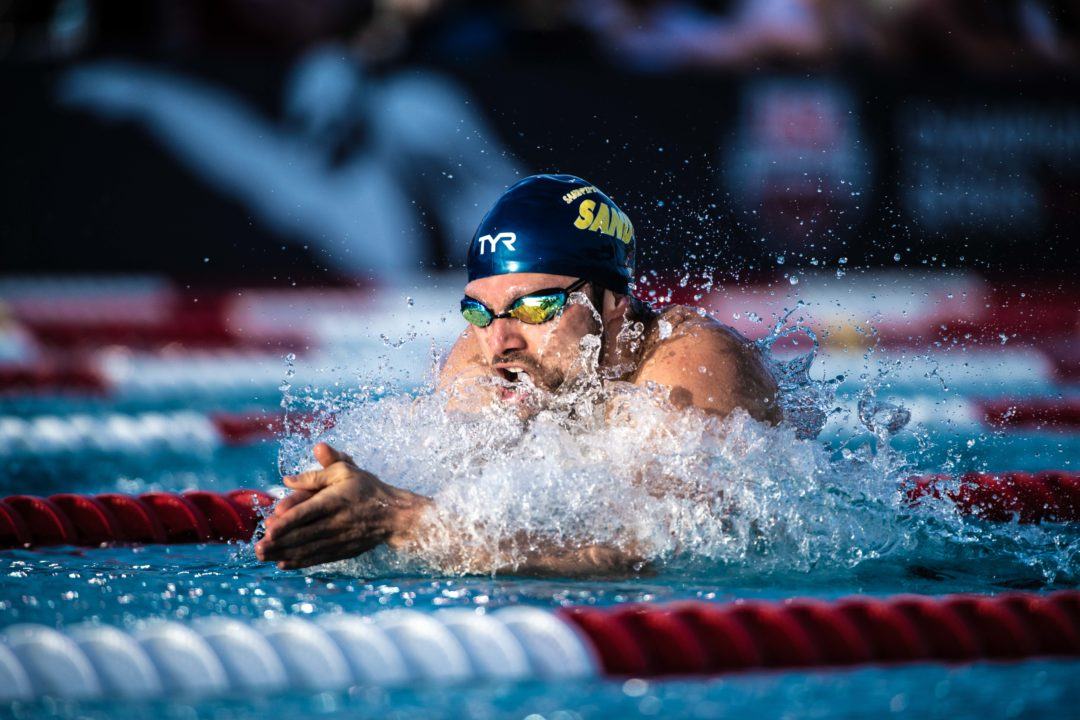 The Youtuber/Olympian discusses in his video about the history of the Duel in the Pool and how it impacted his own swimming career. Archive photo via Mike Lewis/Ola Vista Photography

In his latest vlog post, Olympic medal-winning swimmer and YouTube star Cody Miller goes away from his classic vlog-style videos to give his viewers a history lesson of the “Duel in the Pool” meets. These meets pitted American swimmers versus the world’s best competition.

The Duel in the Pool meets began in 2003, where it started as a competition between two of the world’s biggest swim rivalries: the USA and Australia. The scoring format was set up similar to a college duel meet with individual events and relays in long course. This was one of the first professional swimming meets to take place, and the venue of the first one was Miller’s favorite pool the Indianapolis Natatorium.

Miller takes us through the years with little video clips sprinkled throughout of great swims in these meets and his memories of watching the competitions.

The Americans were dominating these meets. The Olympic breaststroker Miller recalls in 2007 watching fellow American Brendan Hansen split a 59.6 in the breaststroke leg of the medley relay, one of his idols.

“Watching those races to me it was just like exciting and it was something that was different because it wasn’t the Olympic Games, it was just for pride,” says Miller, “One country competing against another country to see who is the overall collective best team.”

At the 2009 Duel in the Pool a lot of things changed. This was one of the last meets of the super suit era, the meet took place in December 2009 and the suits were ultimately banned starting in 2010. Also, the meet changed from Australia to the USA facing the best European swimmers. Last but not least, the meet was changed to SCM from a LCM format.

In 2011, the American women’s 4 x 100 medley relay went on to the start off the meet with a new world record. The dominant relay consisted of Natalie Coughlin, Rebecca Soni, Dana Vollmer, and Missy Franklin.

Finally, we reached 2013 where Miller makes his first appearance at the Duel in the Pool and one of the closest competitions yet. Miller admits he was needed to fill in huge gaps in what used to be a deep breaststroke field for the Americans.

“All four of the great American breaststrokers that swam at the Olympic Games the previous summer had all retired, so they were just trying to fill spots for this team,” Miller explains.

The breaststrokers he is referring to are Brendan Hansen, Eric Shanteau, Clark Burckle, and Scott Weltz.

“I was lucky enough just to be on this team.”

The meet went on to be the most competitive Duel in the Pool meets in history. The final event made the meet tied, and the tiebreaker was one of the first iterations of the 200 mixed medley relay. In a close race, American Simone Manuel got her hand on the wall first to keep the USA’s winning streak alive.

Although, he was happy that the USA won the meet. Miller left the meet feeling dissatisfied with his performance, he did not score in any of his events (top 3).

“I was devastated,” says Miller, “I felt like I didn’t deserve to be there and my performances showed.”

Fast forward to 2015, the meet returned to Indianapolis. Miller used his recent performance to motivate himself and had a stellar showing, winning both the 100 and 200 breaststroke. Miller held off Hungary’s Olympic champion and former world record holder Daniel Gyurta in the 200 breaststroke in both events.

“I took that failure from two years prior and turned it into fuel,” Miller explains.

Behind Miller’s performances and Ryan Lochte’s rapper impersonations, the USA won the Duel in the Pool easily once again.

“I felt proud of my performances, I felt proud to represent the United States because I felt like I contributed and did something worthy of that flag that I was wearing on my cap,” says Miller.

Cody Miller started his YouTube channel in October of 2017 where his vlog has become wildly popular in the swimming community, with well over 100,000 subscribers. Miller currently trains with the IU pro group, is a USA national team member and a swimmer for the ISL’s DC Tridents.

Holy cow. I will use the VLOG in question next time I have a discussion around motivation with my swimmers.

Sports psychologists, pay attention, this is premier material!! Thanks, Cody Miller for sharing this!