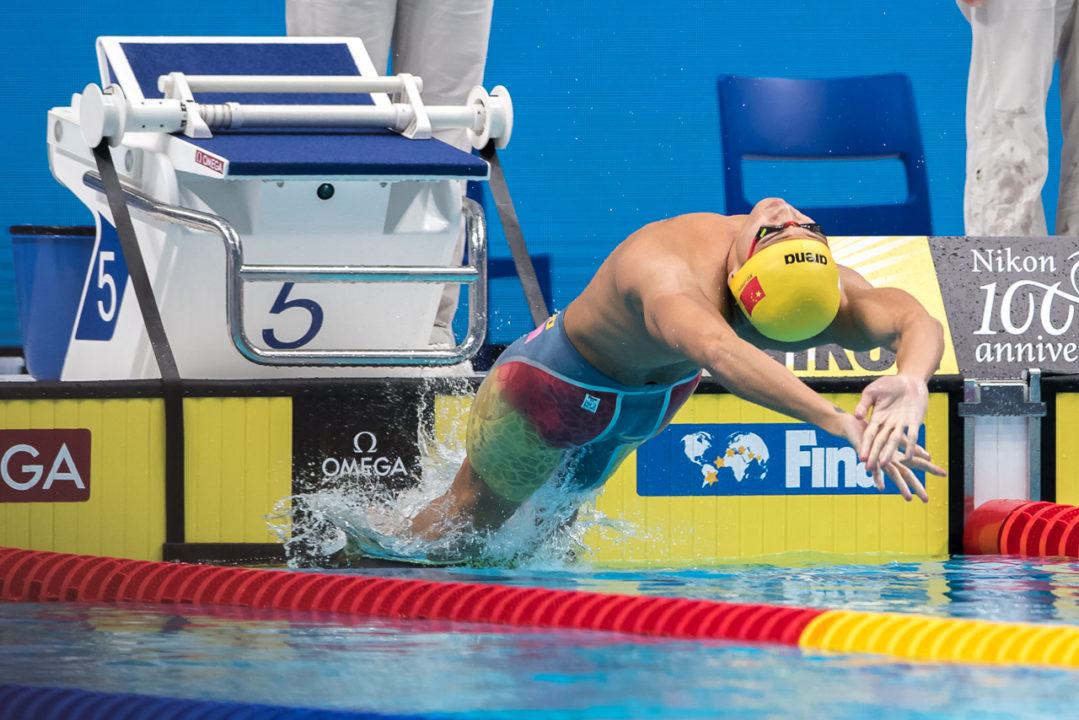 While competing on the final day of the 2020 Chinese Swimming Championships, China blasted a new World Record in the mixed medley relay heats. Archive photo via Peter Sukenik/www.petersukenik.com

While competing on the final day of the 2020 Chinese Swimming Championships, China blasted a new World Record in the mixed medley relay.

The combination of Xu Jiayu, Yan Zibei, Zhang Yufei, and Yang Junxuan crushed a collective effort of 3:38.41 in the heats to narrowly get under the previous WR mark of 3:38.56 set by the United States at the 2017 World Championships.

The former record was held by the squad of Matt Grevers, Lilly King, Caeleb Dressel, and Simone Manuel, which speaks to the caliber of talent it took to take down this standard.

Splits for the Chinese team versus the former U.S. world record holders are below. China front-ended their relay with men, while the Americans alternated gender by stroke.

China was hungry for some vindication after seeing their squad disqualified at the 2019 FINA World Aquatic Championships. They were eager to improve upon their co-bronze medal finish at the 2017 World Championships behind the Americans and runner-up Australia.

At an unofficial test meet in Shandong Province this past July, the same mixed medley relay combination of produced a collective effort of 3:40.56 as a preview. Xu opened in a speedy 52.78 backstroke leg, while Yan took over with a sub-59 clocking of 58.57 to carry the momentum into breaststroke.

Chinese women got upgraded so much at this meet. Zibei’s stroke is awesome

this emphasizes how sub-optimal this US order is for the mixed relay. The idea that the combination of King and Dressel would get solidly beat on their two legs seems crazy

Wow, this is amazing. Congratulations to the swimmers. Everyone was on, and they killed it.
It’s like a redemption story. 2020 was front-loaded (pun intended) with all kinds of tensions for them, but in the end, they came back and did what they would do. They broke the world record, which we were expecting to see a few this year. This makes it feel like 2020 isn’t all bad, it’s a glimmer of hope in a world filled with darkness.

Seems to me a US relay as follows gets this record back (easy):

Back — Murphy or Casis
Breast — Andrew or Dressel or ….
Fly — Dahlia or Huske
Free — Manuel (the GOAT)

This relay may be faster in a meet like this where there is no competition in sight and very little wake or a time trial. It is just such an advantage to go MMWW in meets like worlds where clean water becomes so important. Its not like dressel/zapple will get a draft off the women in the field- they will be 5 secs back and running a train from waay behind the field.
It is possible, but hard to see this being a successful relay at a worlds or games.

I guess that depends on whether Murphy can do a 51.94 again. If he does, the US team wins by a nose (at least comparing flat start times).

Hate to say it but the U.S won’t get this back

If Murphy is back in form, sure they will.

I think the US has a shot to get it back. China has the advantage of using the preferred M/M/F/F order that doesn’t line up as well with the American’s best talent. The US would be fools not to use King and Dressel so the question is will it be Murphy/Manuel or Smith/Held (or whoever beats Held at trials) for the other spots.

This race is between China, the USA and Australia next year. Australia were 3:39.08 at last years worlds, all of them had good splits apart from Larkin who went 53.47 which is well outside his pb of 52.1 that there shows they can potentially drop more then a second plus the improvements the other relay swimmers may have

People forget Australia, but they managed to beat the US lst year without a top breaststroker (M or F)!

You think they’re going to drop 2.2 seconds from what they went at Worlds last year? That’s a big call.

That being said, it would be my guess as well that this is the relay order based on information we have now, and everyone’s capable of those times. Biggest quibble I have on that list is the Lilly split. Her relay swims have not been as good as her individual swims historically. She’s been pretty consistently around a 1:04.8/1:04.9 on medley relays.

But, if you’ve gotta have a swimmer who knows that most of the field is just going to sprint away from her no matter how well she swims (and that Adam Peaty is coming for her from behind),… Read more »

Based on what I’ve seen from minimal clips from Ray Looze talking about lily, I have a strong suspicion that she is on a 4 year Phelps-type training plan. Yulia has already split 1:03 so it’s definitely possible and lily has split as fast as 1:04.1 in 2017. And I wouldn’t doubt lily is going for a 1:03 individually so she hopefully will carry that firepower into the relay. Ryan Murphy also probably has a chip on his shoulder and should definitely be under 52 consistently if he’s on his taper. The other two split were relatively safe bets, barring another motorcycle class from dressel and hoping that Manuel doesn’t choke another relay anchor 🙂

No one has ever been under 52 consistently.

The USA swimmers from this WR swim have each been faster than their 2017 relay splits from a flat start. To say they couldn’t break this WR is quite the over-statement.

How many push-ups and how fast was the run before hand? I call BS! I want to see those push-up count cards Bahahaha

Will this record be ratified by FINA?

While FINA has made some odd decisions before (ala ISL), there’s no reason directly related to the circumstance that it shouldn’t, presuming all 4 athletes were drug tested afterward.