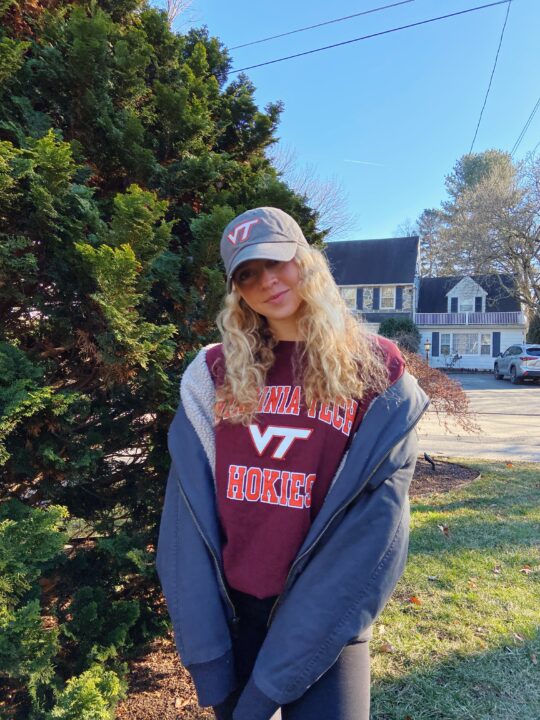 Weiss swam for one meet at Miami (FL) but is medically redshirting the rest of this year. She had shoulder surgery last year. Current photo via Camille Weiss

Camille Weiss from Philadelphia, PA has announced her commitment to transfer to Virginia Tech. Weiss was originally committed to the University of Miami (FL) and swam one meet with the team in the fall.

“Change of plans… super excited to announce my commitment to Virginia Tech!! Huge shoutout to my coaches and teammates for getting me here and thank you to the Virginia Tech coaches for being so welcoming. Can’t wait to join the Hokie family”

Weiss was originally a member of the class of 2025 for Miami and competed in the team’s first meet of the season in October against FIU. There she swam times of 54.79 in the 100 freestyle and 1:56.70 in the 200 freestyle. She did not compete in a meet for the Hurricanes after that.

SwimSwam reached out to Weiss about her change in plans and she said that she had surgery last year. She is medically redshirting this season allowing her to not lose a year of eligibility. She also said that she is looking forward to joining a co-ed team with a different team culture.

Her best short course times are:

Virginia Tech is a public university located in Blacksburg, VA. The school is a member of the ACC. The Hokie women finished fourth out of 12 teams at the 2021 ACC Championships.

Her 500 freestyle and 400 IM best times would place her fourth on the roster this season, and her 200 freestyle best time would put her tied for fifth.

She also told SwimSwam that she plans on arriving on campus either this summer or in the fall. She will arrive on campus just in time as the Hokies fastest 200 freestyler this season, Reka Gyorgy is a graduate student.