Cal Tops Indiana in First Half of Hoosiers’ Bay-Area Swing 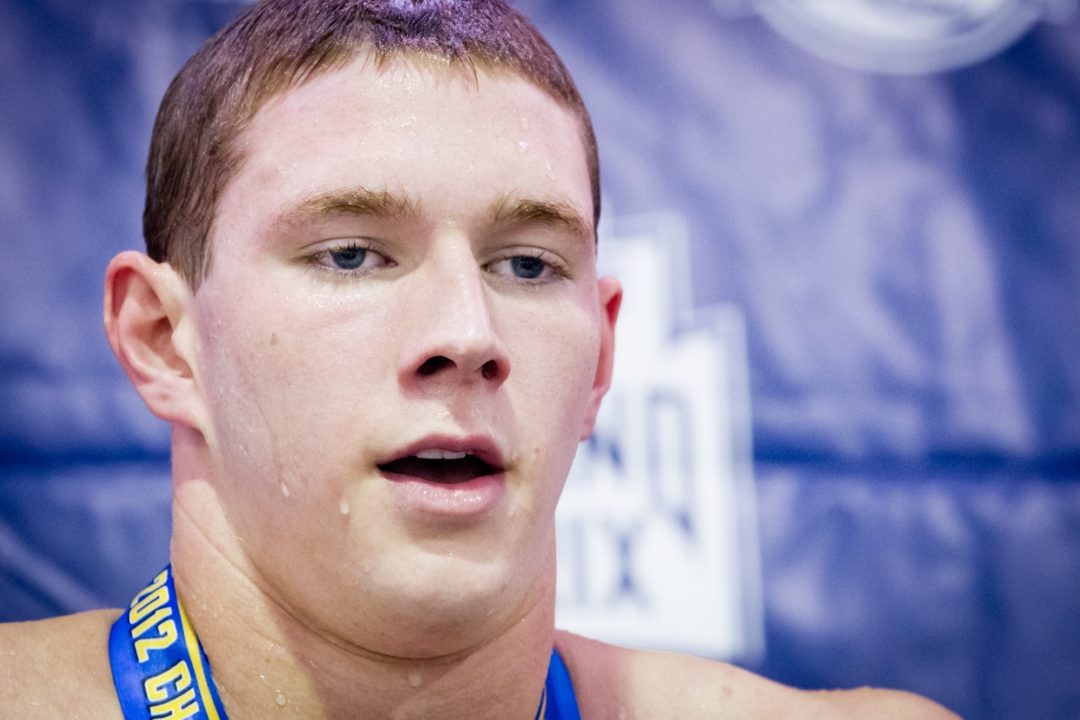 INdiana sophomore Anna Peplowski racked up three individual wins at the meet (100 back, 200 back, and 200 free) and six total victories including relays.

Instead of the big tri meet we’ve seen them in the last few years, the Indiana men have opted for a different route to start their 2013-2014 season by swinging through the San Francisco area for top-10 blowout match-ups against Cal and Stanford.

Their quest began on Friday night on the east side of the bay with a dual against the 2011 and 2012 NCAA Champions of Cal before swinging through to face Stanford on Saturday.

Cal wound up reigning supreme in the opener, taking a 173-122 victory (with Cal putting their swims in exhibition-mode in the last two races).

Cal opened with a 1:28.92 in the 200 yard medley relay, and for the first time they swam what appears to be close to their A-medley, rather than splitting between their top 2. That included Ryan Murphy, Josh Prenot, Marcin Tarczynski, and Tyler Messerschmidt (for those keeping count, that’s a freshman, two sophomores, and a senior).

That time was the third-best time in the country so far this year, behind only Florida and Michigan (and not by much).

Let’s step aside for a second and break down all of the interesting and exciting things we saw in this relay (WATCH THE RELAY ON YOUTUBE HERE):

Back to the show…

Cal senior Jeremy Bagshaw won the men’s 1000 free in 9:06.60. That’s the second-best time in the country this year in Bashaw’s first attempt at this race in the new season.

With Bagshaw in the pool, the freshman Janardan Burns looked much better in his second dual meet than in his first, dropping six seconds to go a 9:32.21 for 2nd place. Indiana sophomore Grayson Smith was 3rd in 9:41.98.

Cal continued to roll in the 200 free, where Trent Williams won in 1:38.29. That’s a hair slower than what defending NCAA champion Joao de Lucca was on Friday night across the country, but enough in the same neighborhood to be exciting for the sophomore.

We would see a similar finish order play out in the 200 back, with Murphy taking the win in 1:43.72, Ress placing 2nd in 1:45.76, and Pebley 3rd in 1:46.58. Those times for Murphy and Ress are the fastest official marks in the country, though Jack Conger was a 1:42.5 (suited) at Texas’ intrasquad, which they haven’t submitted for the database yet.

In the men’s 100 breaststroke, the aforementioned Tanner Kurz had another great swim with a 55.78, beating Cal’s Josh Prenot in 55.85 and Indiana’s Cody Miller in 56.40. That race gave Indiana their first win of the night, and for the Hoosiers, Kurz will probably be the happiest of the group with his results.

Cal got back on track with another freshman win: Long Gutierrez took the victory in 1:47.72. Gutierrez is going to contribute to Cal in a lot of ways in his four years, and is surprising us, and probably many of our readers, with just how good he’s been in this 200 fly. Cal’s Dane Stassi took 2nd in 1:48.48, followed by Indiana’s Steve Schmuhl in 1:48.89. That’s huge for him and shows the progress he made over the summer – he was two seconds faster here than he was to open last season, and that’s even after a big day of travel.

Note that Seth Stubblefield didn’t swim this race, where he was an A-finalist at NCAA’s. He did, however, swim the 200 free earlier in the meet, and the 100 free that came afterward against Tyler Messerschmidt. Messerschmidt won in 44.20, while Stubblefield was 2nd in 44.85. He also took 2nd in the 100 fly, an event that he’s swum at every meet so far this year, in 49.08 (that race was incidentally won by Tarczynski in 48.59).

Indiana is probably in heavy yardage right now, heavier than Cal, but Cal is probably hitting the weight room very hard as well. For the Hoosiers, pay closer attention to their results from Saturday, when they’ve had time to settle in from their cross-country trip a little bit.

The videos are very good from Bobo. The announcer was rubbing the sweeps in a few times. Poor Indiana. Messerschmidt has a flawed freestyle stroke, but it gets him home.

My goodness, as you say in USA! 🙂
I’ve found very interesting videos!

Coach Durden before the meet
http://www.youtube.com/watch?v=at-rEcmh-Bc

YOU ARE NOT THE ONLY ONE!