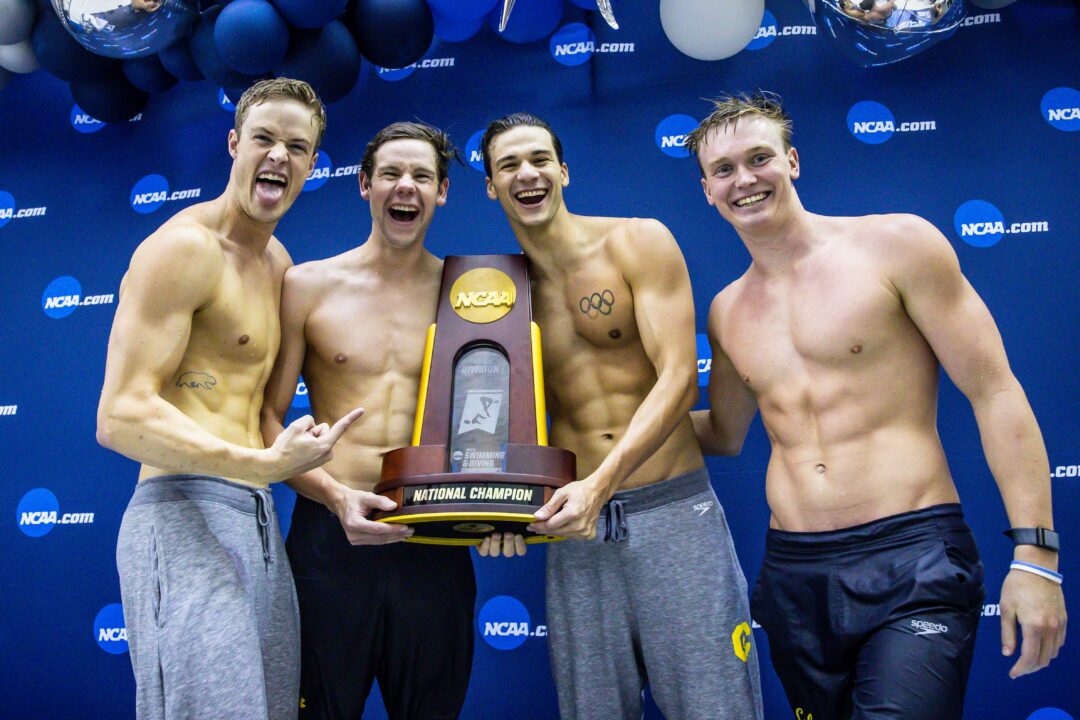 The California Bears have reclaimed the NCAA Division I Men’s Swimming & Diving Championship from their arch-rivals, the Texas Longhorns, 487.5 to 436.5 Current photo via Jack Spitser/Spitser Photography

The California Golden Bears have reclaimed the NCAA Division I Men’s Swimming & Diving Championship from their arch-rivals, the Texas Longhorns, 487.5 to 436.5

Cal and Texas have now alternated team titles each of the last three championships, with Cal winning in 2019 and 2022, and Texas winning last year.

This year, it was once again a close battle, but the Bears pulled ahead after the 200 back and ended up winning by a margin of 51 points.

The Bears started off relatively slow, finishing 3rd in the 200 medley and 4th in the 800 free on Wednesday night, then they failed to get anyone into either final of the 500 free.

But they picked it up from there, earning 2nd place finishes in the 200 IM (Destin Lasco), 50 free (Bjorn Seeliger) and the 200 free relay. In that last event, Seeliger, led off in 18.27, making him the fastest man not named Caeleb Dressel in the event.

They didn’t have a slew of finalists Friday, but they still came out swinging, as Hugo Gonzalez broke the U.S. Open Record in the 400 IM, and they closed out the session by winning the 400 medley despite swimming in the next-to-last heat.

The Bears took care of business Saturday morning, and while the Longhorns still led after the 1650 Saturday afternoon, it was essentially over by that point. Cal took the lead after scoring 53 points in the 200 back, led by champion Destin Lasco. While that was their last title, they kept swimming strong all night, ultimately winning by over 50 points.

That’s now the 7th NCAA title for the Cal men and the 5th under head coach Dave Durden. The Bears haven’t finished lower than 4th at NCAAs since Durden took the helm during the 2007-2008 season, and they’ve finished in the top two every year except 2008 and 2009 under his watch.