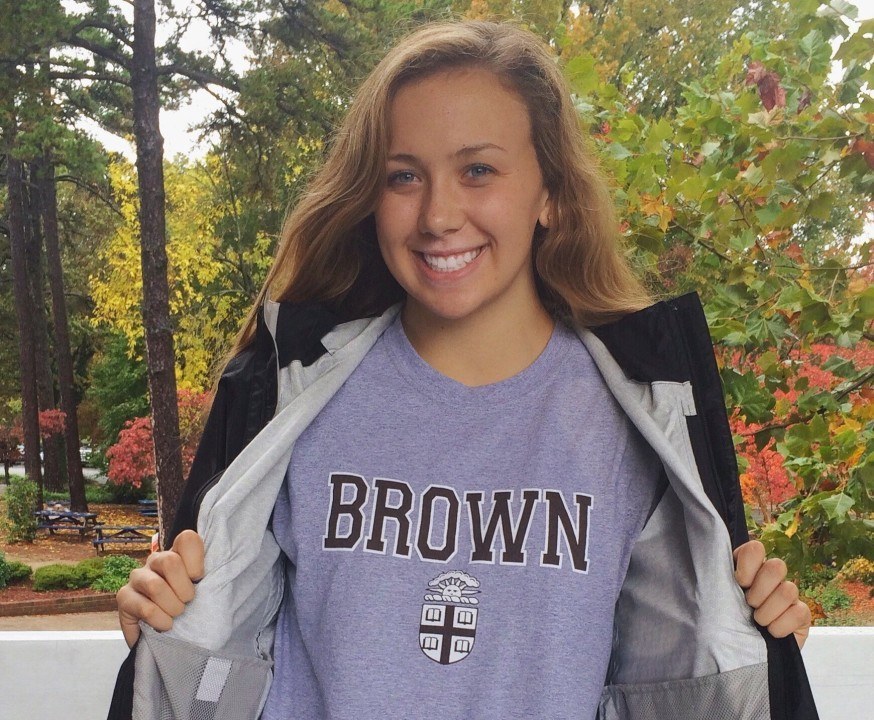 Greensboro, North Carolina’s Amelia Gilchrist has made a verbal commitment to swim for Brown University in 2016-17.

“I chose Brown because when I took my visit I got an amazing vibe. The coaches are very enthusiastic and I really feel like I will fit in well with the team. I was also drawn to Brown’s outstanding academics. Out of all the schools I was looking at, Brown is the farthest from home, but I felt by far the most comfortable at Brown.”

Gilchrist swims under Kevin Thornton at Swim GSA, a team she has been on for 11 years. She has done quite a lot of improving over the last two years, as evidenced in the progression below:

Gilchrist is a nice pick-up for the newly-separated Brown women’s program. She would have scored in the B finals of the 100/200 back and 200 free at 2015 Ivy League Women’s Championship, only barely missing the A finals in each of those events. She will join Jessie Blake-West and Kelley Tackett in the class of 2020.

*DISCLAIMER: Tackett has not yet been officially accepted to Brown. As is true with all Ivy League schools, Brown’s Admission Office will not send its acceptance letter until the beginning of December, along with those of all Early Action candidates. The procedure for a recruited athlete like Tackett is for Admissions to review her transcript and SAT scores, “support her application for admissions in the fall,” issue a Likely Letter, then offer her acceptance into the class of 2020.