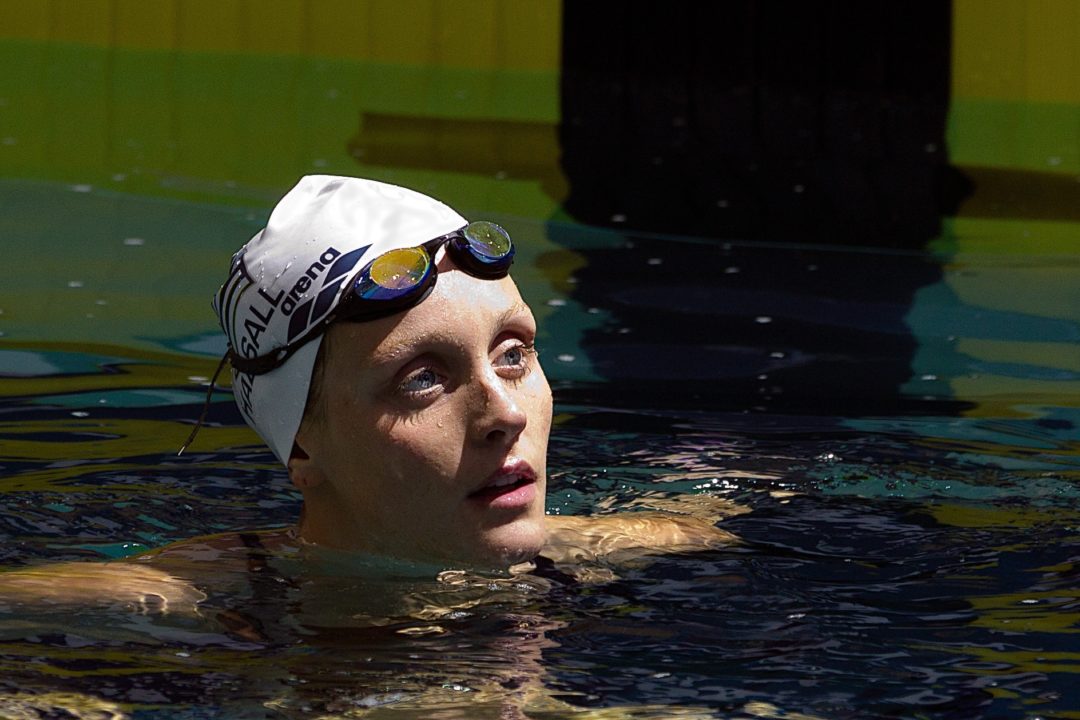 Fran Halsall is one of the stars of the Loughborough sprint group that has a new coach. (Photo Courtesy: ©Tim Binning/TheSwimPictures.com)

Beginning the fulfillment of a long-expected plan, British Swimming has anointed James Gibson as the interim head coach of their Sprint Programme, to be under the umbrella of the Loughborough ITC at Loughborough University.

Gibson walked away from the sport in 2010 due to a back injury, but in his long career he started a bit of a trend in British breaststroking. In 2003, he was the World Champion in the 50 free as well as a bronze medalist in the 100.

His coaching credentials in a short period since swapping his suit for a whislte have become equally impressive: over the last two seasons, he has led the sprint program at the famed French club Marseilles. There, he transformed from a swimming member to a coaching member of one of the best sprint groups on the continent, if not the world, coaching among others surprise 50 free Olympic Champion Florent Manaudou and the Netherlands’ Inge Dekker.

The plan is to have this group temporarily reside in Loughborough, while British Swimming seeks both a permanent location for a British sprint squad as well as a permanent lead of Loughborough. The former head there, Ben Titley, left to take a similar job in his wife’s native Canada a few weeks ago.

“James Gibson has accepted the job as Interim Sprint Coach and will join us in December,” British National Performance Director Michael Scott said in describing the appointment. “Once we know our budget from UK Sport and have established our future funding priorities from that, the nature and extent of the sprint programme will be determined going forward.”

“As a swimmer, Gibson’s background is first class and although he is a young coach, his experience in working with the world-renowned sprint programme in Marseille and his role with the Dutch swimming team over the last two years have provided him with great skills to help British Swimming lift its performances in the sprint events.”

Among those sprinters based in Loughborough in the runup to the last Olympics include Fran Halsall, Caitlin McClatchey, Amy Smith, and Liam Tancock.

Carry, who at 31 is 7-years Payne’s senior, retired following a London Olympics where he did his country proud by making a final in the 400 free.

Carry has accepted a job in his native Scotland with Redsky Management: a sports management company that represents many swimmers including Craig Benson, Hannah Miley, Michael Jamieson, and Robbie Renwick. Payne, saying that “his new career is the most important thing for us right now,” has gone with him to Edinburgh.

“The time is right for a change. It’s the start of a new Olympic training cycle and the start of a new stage in our lives as a married couple so it is the right decision,” Payne said of the move. “That said it was a hard decision to make, I’ve trained at Stockport Metro for over nine years and the club has done a huge amount for me throughout my career.

“The facilities, the swimmers and especially the coaches Sean (Kelly) and Lars (Humer) have been fantastic. I have definitely made some friends for life.”

Payne has not settled on where her ultimate training location will be, but she is testing out both Warrender Baths and the University of Edinburgh.

Warrender Baths is the dominant club in Scottish swimming, and one of the best in all of the UK, and is home to the aforementioned Craig Benson and Florida Gator Dan Wallace, among others. Edinburgh’s performance squad is run by Mark Jaggs and Chris Jones. The club is the official club representation of Michael Jamieson, though he trains at the Bath ITC most of the time. The University also hosted the Olympic swim team in their final Olympic preparations.

Anybody who watched the French champs would actually know that ha. Both Manaudou siblings wore GBR racing caps (Gibson’s own ones) at that meet in respect to Gibson who they knew was leaving. Lovely touch huh.

Good question. Barnier I believe is the coach of Florent. I’m not even sure if Gibson coaches Dekker. I’d like confirmation on this as well.

Gibson does not coach Dekker, Barnier does.