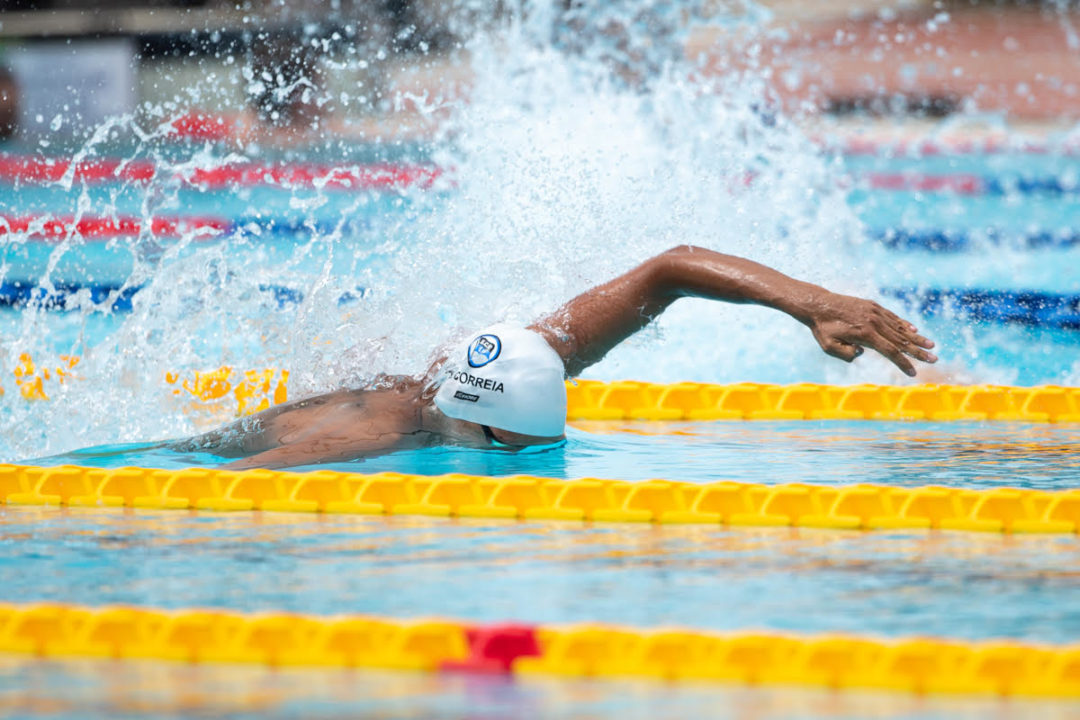 Brazil used the same squad they set the Brazil National Record with at the World Championships a couple weeks ago. Stock photo via “Rafael/Domeyko Photography”

Brazil won Gold in the men’s 4×200 free relay in Lima tonight, swimming past the American relay on the end of the 2nd leg, and opening up a 4 second lead by the finish. Brazil used the same squad they set the Brazil National Record with at the World Championships a couple weeks ago, and used the same order. Tonight, they swam a 7:10.66, undercutting the Pan American Games Record, which Brazil already held at 7:11.15. Luiz Melo led off in 1:48.10, with Fernando Scheffer in next with a 1:46.36, then Joao de Lucca split 1:48.62, and Breno Correia anchored in 1:47.58. All 4 of Brazil’s splits were in the top 8 fastest splits of the field in tonight’s final.

Here is the comparison of splits between tonight’s race, and Brazil’s 7:07.12 from prelims of the World Champs, which stands as the Brazilian Record (Brazil swam slower in finals at Worlds – 7:07.64):

All 4 swimmers were a little slower tonight than they were in Gwangju. It should also be noted that Brazil broke the World Record in the SCM 4×200 free relay at the 2018 Short Course World Championships. On that relay, which swam a 6:46.81, Brazil used Melo, Scheffer, and Correia, but used Leonardo Coelho instead of Joao de Lucca.

Speaking of records, both Mexico and Peru broke their respective National Records in tonight’s relay as well. The Mexican squad of Jorge Iga (1:47.92), Long Gutierrez (1:47.90), Jose Martinez (1:51.29), and Ricardo Vargas (1:52.32) combined to earn the Bronze medal with a time of 7:19.43. That swim took well over 2 seconds off the previous Mexican Record of 7:22.12, which was set at the 2015 Pan American Games in Toronto. That Team Mexico squad featured both Gutierrez and Martinez, but had Luis Campos and Julio Olvera instead of Iga and Vargas. With the quick start from Iga and Gutierrez tonight, Mexico was just .20 seconds behind the United States, who went on to win Silver, at the 400 meter mark.