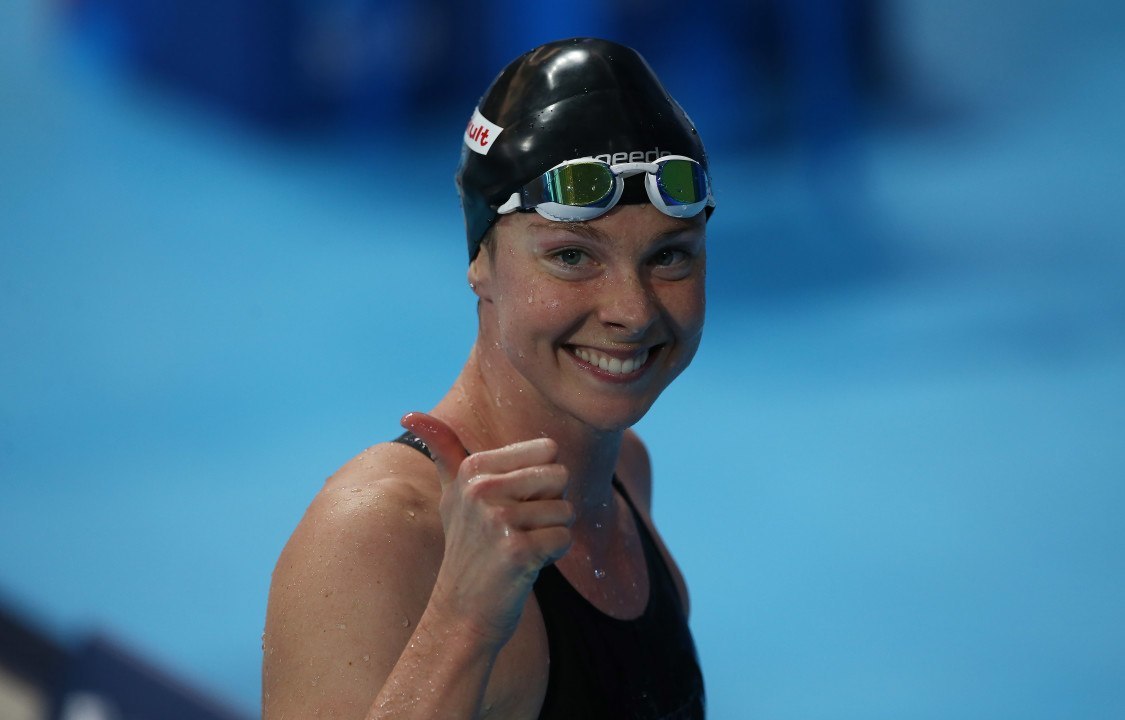 Right off the bat on day 1 of New Zealand's Olympic Trials, Kiwi stand-out Lauren Boyle nailed a qualifying time for Rio by racing her way to an 800m freestyle victory. Current photo via courtesy of New Zealand Swimming

The next several weeks are going to be busy, busy, busy with various countries’ Olympic Trials kicking off in preparation for the 2016 Games in Rio. Just this week, New Zealand sees the first of two qualifying meets blasting off, as approximately 256 swimmers across 6 clubs convened at the Sir Own G. Glenn National Aquatic Center in Auckland for day 1 of its Olympic Trials.

The Trials meet, which runs from today, Monday, March 28th through Friday, April 1st will host some of the nation’s highest caliber athletes and para-athletes in the form of Lauren Boylen, Glenn Snyders, Helena Gasson, Sophie Pascoe and Mary Fisher.

The 2nd qualifying event for Kiwi swimmers is the Canadian Olympic Trials, which are slated for April 5th through April 10th. Swimming New Zealand nominations will be forwarded to its Olympic Committee for considerations following the Toronto meet, with the entire roster expected to be named on April 15th.

Of this week’s meet, Swimming New Zealand Chairman of Selectors, Mark Saunders, identifies Tokyo 2020 development as well as Rio qualification among the squad’s goals. “The group that reached Fina A standards last year will be the strongest candidates because at this level of the sport, gains are incremental. The work has gone in over the past two years especially on the next group of swimmers and they are tracking strongly but they would need significant personal bests next week to push into Olympic consideration.”

He continued, “There is a possibility for relay teams to reach the standard although the key challenge will be for two individuals in each relay to reach Fina A standards.”

Right off the bat, Kiwi stand-out Lauren Boyle nailed a qualifying time for Rio by racing her way to an 800m freestyle victory over countrymate Emma Robinson. Boyle’s mark of 8:25.00 falls well beneath the FINA A cut of 8:33.97 to most likely punch the 28-year-old United Swimming Club member’s ticket to Brazil this summer. Her outing in Auckland sits just off her season-best of 8:24.76, which is what she clocked in Doha in November at the World Cup for 5th-fastest in the world.

Boyle was satisfied with her race today, saying in a post-swim interview, “I am really happy to have qualified and on the first day so good that we have got that done.”

Giving a nod to camaraderie in helping Robinson along within the race, Boyle also commented “I tried to go out strong and maintain it. I really wanted Emma to qualify. She is such a good training partner and works so hard so good to see her improving every year and getting closer to me which is great. I’ve tapered for this. It’s not guaranteed that you will qualify so it’s great to have qualified but it’s also important to post a fast time some point this year.”

Robinson also scored a Rio-worthy mark, touching behind Boyle in 8:31.27, a personal best in the event. Her time also scores a FINA “A” cut and gave Robinson a mental and physical boost in light of her lackluster performance in Kazan last summer. “I thought I had the form I needed but worried because I had not swum that time since last year. I had a bump being really sick at worlds so this is a nice confidence booster,” Robinson said post-race.

Another woman who highlighted the first finals session in Auckland is butterflyer Helena Gasson, who notched a new National Record in the 200m event during prelims. In her morning race, the 21-year-old North Shor Swimming Club athlete threw down a monster 2:09.84, to lower her own previous 200 fly record of 2:10.98, which was itself only clocked earlier this month at Australians NSW Championships.

As swift of a personal best for Gasson as it was, however, the mark still sits outside of the FINA A cut of 2:09.33. In the finals, Gasson actually wound up as the silver medalist, unable to repeat her sub-2:10 mark, stopping the clock instead at 2:11.43. Capital Swim Club’s Samantha Lee garnered the win in an evening mark of 2:11.21.

On the men’s side, as a warm-up to his primary event, the 1500m freestyle, Nathan Capp took the men’s 800m freestyle race in a time of 8:05.01. Capp holds New Zealand’s National Record in the event with his mark of 7:57.61, which he registered at last summer’s FINA World Championships in Kazan.

The meet continues tomorrow with the men’s and women’s 200m freestyle, 50m backstroke ans 200m breaststroke, in addition to the men’s 400m IM.