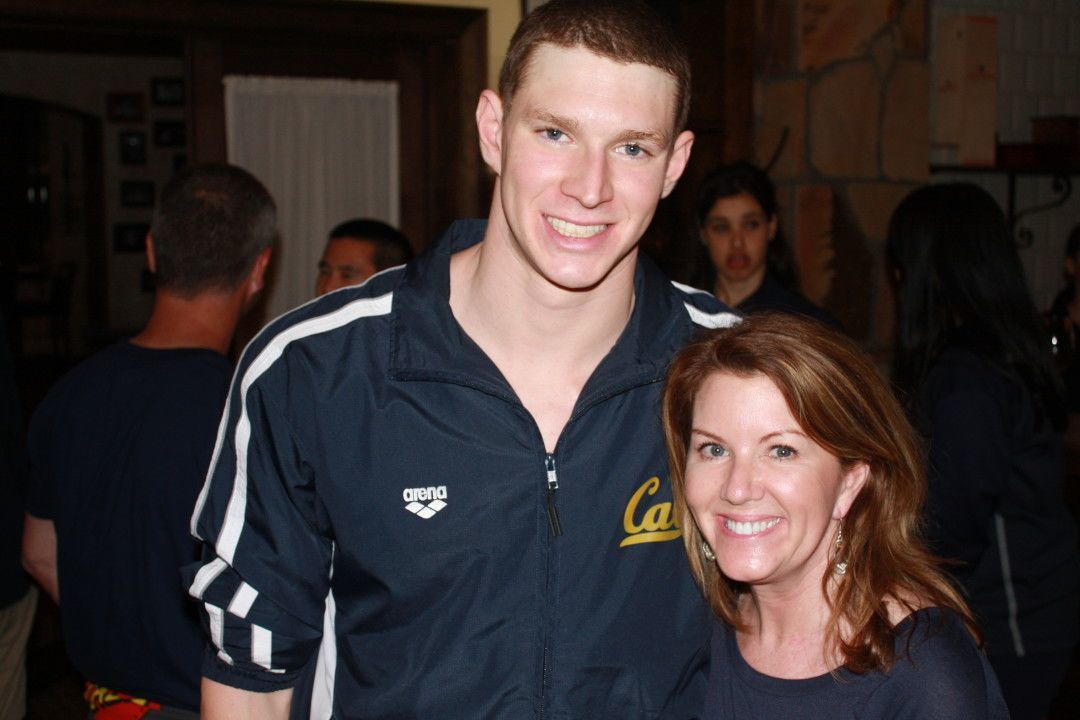 SwimSwam caught up with Katy Murphy after Ryan's phenomenal performance at 2016 NCAA Division I Championships to find out what it takes to raise an American record-holder. Current photo via Katy Murphy

No. Although I was active and valued exercise, I did not compete at a high level in any sport.

When Ryan was a toddler, I noticed his strength, speed and lack of fear, which were unique compared to his older sister and brother. He would hang from monkey bars, and run across the soccer field at Patrick’s practices while my husband was volunteer coaching. Ryan picked up skills quickly. When he became old enough to participate on teams, Ryan showed athletic ability for all sports. However, when he dove into the pool for a recreational summer league swim team in 2000, there was something very special. In fact, the summer league swim coach called me at the end of the season, explaining to me that Ryan had a natural talent in the water

Balance is SO important. The development of time management comes from a structured schedule and prioritizing values. First of all, we had a rule in our house. “Quit” was not in our vocabulary. So, each school year, Shannon, Patrick and Ryan were allowed to choose their activities. They didn’t have to sign up for the same sport or club that they did the year prior, BUT if they decided to try something, they had to finish the season. Secondly, school always came first. Thirdly, sports provided social opportunities when my children were young. Even when they got older, their social circles tended to be their teammates. Lastly, our family life always revolved around support and love for each other. My husband coached soccer for the boys. I always volunteered in the classroom, as well as acted as team mom or moderator for sports and clubs. I believe if parents are involved in our children’s young lives, then the children value the family unit as they get older.

I have three children; Shannon (24), Patrick (23) and Ryan (20 ½). I hope I don’t mother them differently at all. I hope that I show them unconditional love, interest in their lives, and a willingness to help them always. However, each individual personality is unique, and each of my children had different needs and goals at different times. Generally, I tried to provide advice when needed, guidance when asked, and constant support. All three of my children are over-achievers, but at different points in their lives, their level of motivation varied. In terms of academics, while I sometimes needed to tell Shannon that she had studied enough and was plenty prepared for her test the next day, I needed to tell Ryan that maybe he should review his notes one more time. Also, I tried to provide proper perspective, based on realistic goals for the future. While I encouraged Patrick to take a few AP and many honors classes his junior year in high school, I advised Ryan to take the highest level math course, but an easier history class. My point is that I treated my children differently based on their unique personalities and their goals at the time.

This is an easy question, and my answer will be shorter. The best part about being a swim mom is the FRIENDS you make!

This is a very difficult question, because I have so many favorite memories, like Patrick and Ryan getting 2nd place on a Junior Olympic Relay together in the summer of 2003; Ryan’s national age group record at age 12 in the 400 IM; Ryan’s junior national cut in 2009 in the long course 200 IM; Ryan’s 100 back semi-final race at Olympic Trials in 2012; Ryan’s national high school record in the 100 back in 2012; Ryan’s NCAA meets in 2014, 2015 AND 2016; Ryan’s mixed relay prelim race at Worlds! However, I think my favorite memory is when Ryan was seven years old. Our entire family traveled two hours north to Savannah, Georgia for the Carey Hilliard Fall Classic. First, Ryan won the 50 free and 50 back in times that qualified for Florida’s Junior Olympics in the 10 & under age group. This was a complete thrill for all of us, but when the highpoint trophy award came down to a final race of the 100 freestyle, Ryan blew us away. He wanted that trophy so badly, he flew off the blocks like a rocket. His coach told me…. Oh my goodness, he’s going to die (he was 7). Ryan went 1:08! And won!

8. Do you get nervous watching Ryan swim?

A back shot of Cal’s Ryan Murphy stepping up for the 200 IM. Photo Credits: Tim Binning/TheSwimPictures.com

Of course! Honestly, it depends on the meet and the event. I will be nervous at Olympic Trials this summer!

Unfortunately, I probably didn’t always handle them well. I hope I didn’t show too much negative emotion. I was never, ever disappointed with Ryan. I always knew that he gave the best he had at that moment. But, sometimes, my “mama bear” instinct would over-analyze. I am a math teacher, so my tendency is to view everything logically. It’s taken me a while to realize that there isn’t always a reason for things to not go as planned. As far as how I tried to help Ryan, I would simply listen if he wanted to talk, or give him a hug and tell him I loved him and not talk about it. And, ice cream always helped!

Love your child unconditionally. Be involved, but not over-involved. Advocate for your child when necessary, remembering that you know your child better than anyone. Support the coaches and the program. Volunteer. Cheer for all the swimmers. Be a team player. Remember that your child is not a swimmer; he or she is a person who swims.

Anne Lepesant is an ordinary swim mom. Her four daughters have been with Swim Pasadena since 2004 and now three swim in college (Caroline is a senior at SCAD Savannah; Victoria, a junior at Princeton; Madeleine, a freshman at Hamilton) and one in high school (Isabelle is a junior at Pasadena High School). In this series, Anne explores the question: “ordinary” swim mom to “extraordinary” swim mom, what it’s like to raise truly exceptional swimmers? What experiences have we all shared? Where do our paths diverge? Stay tuned for more interesting #SwimMomMonday conversations.

Katy, we r trying to figure out if you or your husband are related to the Nicholson family from Chicago? Or possibly McNamara? No matter what, you are such an inspiration to all mothers in that you give and have given a 100% to your kids! Being a parent who is involved is so important! Congrats Ryan and family! Safe travels home. We r proud of the accomplishments????

Hi Jean. Yes! My maiden name is Sullivan. And my paternal grandmother’s maiden name was Nicholson. My grandma’s younger sister married a McNamara. Thanks for your kind words!

“It’s taken me a while to realize that there isn’t always a reason for things to not go as planned.”

As a swimmer and coach, this is the most important thing I would like swim parents to realize. My parents were actually pretty hands-off with regards to swimming. However, it has been really upsetting to see friends or swimmers of mine have the disappointment of a bad swim compounded by their mom or dad questioning their work ethic or competitiveness. A lot of those parents truly meant well, too. They just didn’t quite understand that sometimes, bad races happen. Even bad seasons.

Nothing is going to completely alleviate the sting, but I think a better approach would be to tell… Read more »

P.S. I am not suggesting that Mrs. Murphy was too negative with Ryan! I would actually be very surprised if that were the case, despite her concerns in that direction. The quote just stuck out to me is all.

“Boy Wonder” has a wonderful mother! I enjoyed the article and loved Katy’s words of wisdom. Pat and Katy are great role models and have done a fabulous job of balancing sports, family life, and academics. Producing talented student athletes with great character is their specialty. Cheers to all of the Murphy family!

One of the best article I’ve read on this site.

And his sister Shannon 🙂

I’m already nervous for American backstrokers because Mitch Larkin has been dominant in LCM, so I can’t imagine how nervous the swim families are now.

Katy is one of the friendliest people you will meet up in the stands! We are all so proud of Ryan and love having this great family affiliated with our Bears!

I back that up fully . Wonderful Mother and Woman + an amazing Talented backstroker and young guy . can’t get better