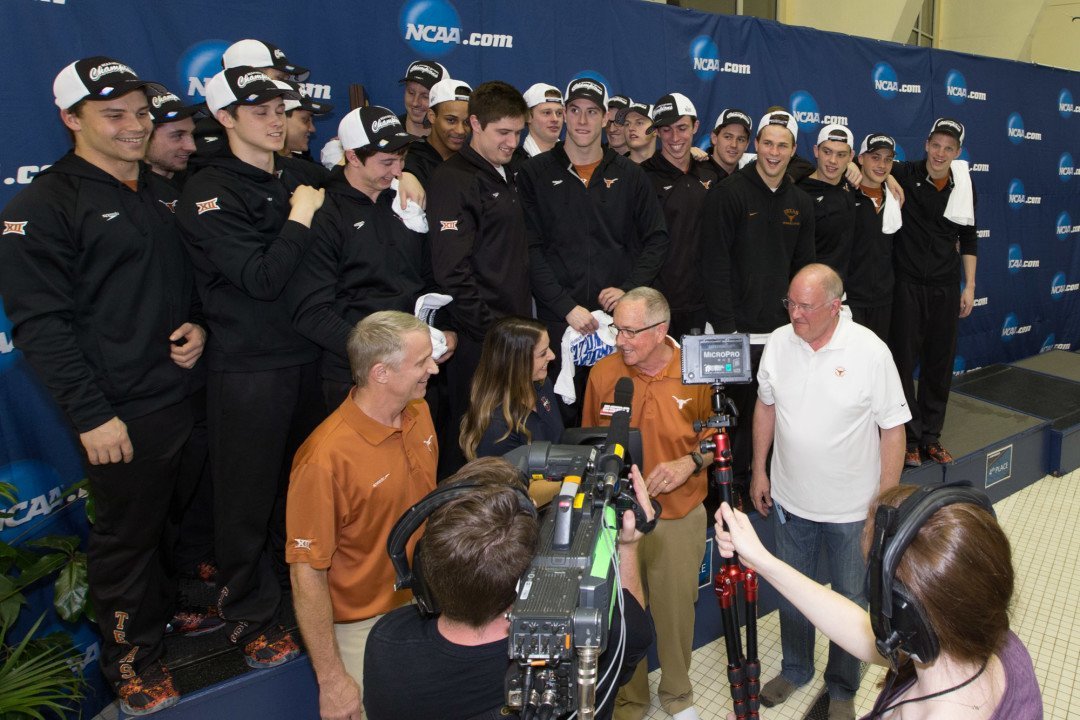 The men's NCAA title never appeared in serious jeopardy, with Texas leading basically every poll for the length of the year. Perhaps the only surprise in these poll numbers is that the Longhorns didn't poll higher - they took 83.6% of the total votes. Current photo via Tim Binning/TheSwimPictures.com

Our most recent poll involved the men’s NCAA Championships:

The men’s NCAA title never appeared in serious jeopardy, with Texas leading basically every poll for the length of the year. Perhaps the only surprise in these poll numbers is that the Longhorns didn’t poll higher – they took 83.6% of the total votes. Compare that to our Pick ‘Em Contest, where about 87% of entrants picked Texas to win.

Record-breaking weekends from Joseph Schooling, Townley Haas, Will Licon and Jack Conger now in the books, the majority were proved right in the poll results.

Also surprising was how close the next four teams were. Cal had always seemed like the best challenger for Texas, with backstroke king Ryan Murphy leading the relays and Josh Prenot‘s ability to perhaps steal wins from Licon. But Cal only got about 14 more winner votes than NC State and Auburn in our poll.

Perhaps owing to a poor showing on the women’s side, Florida actually earned less winner votes than Auburn after the Gators beat the Tigers at SECs. Meanwhile NC State was riding high in psych sheet scores, but dropped from the top seed a few relays to ultimately take 4th after polling well in our A3 survey.

Below, vote in our new A3 Performance Poll, which asks voters to select the best performance on men’s NCAAs out of 5 record-breaking swimmers:

I, too, was one of the ones who “predicted” Texas would win 🙂

All the NC State fans that thought their team was better than it actually is….

Wow, only 84%. It was never in doubt that Texas would win. The only blemish was not winning two of the relays. There is a 100% chance that Texas will win again next year Very few seniors leaving. Texas has all the right ingredients: good school, good location, good coach, good alumni, good pool, weakest conference. A perfect script. Eddie is building a dynasty. Congrats