Bolles Makes it 30 Straight with 2017 Florida 1A State Title 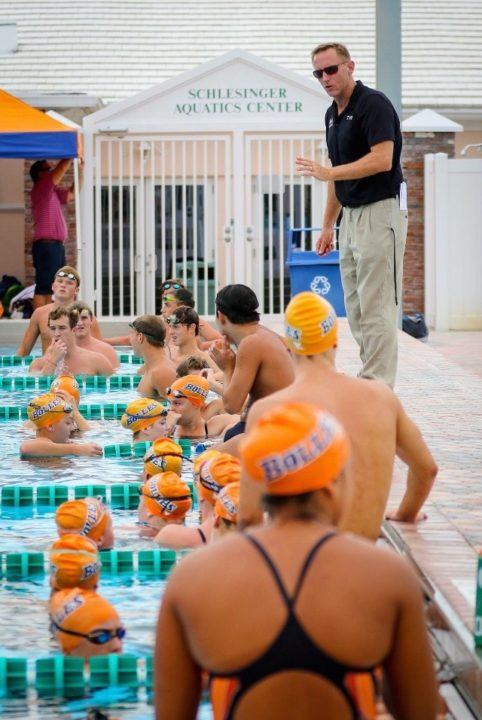 The Bolles boys extended their winning streak to 30 straight state titles with a dominant 350 points. On the girls' side, Bolles extended their streak to 28 with 333.5 points. Archive photo via Stefanie Mendizabal

The Florida High School Athletic Association class 1A state championships concluded on Saturday night in Stuart, Florida. The Bolles boys extended their winning streak to 30 straight state titles with a dominant 350 points. On the girls’ side, Bolles extended their streak to 28 with 333.5 points.

Spektor returned for his signature 100 fly, battling closely with Episcopal’s Cole Crane the whole way through as he successfully defended his title in 48.20 to Crane’s 48.44. Shortly before the 100 fly, Crane took gold with a 20.40 in the 50 free.

One of the most anticipated races of the meet was the girls’ 100 fly battle between 2016 champion Jessica Nava of Westminster Academy and 2016 runner-up Alessandra Baldari of Benjamin. Last season, Nava snagged the gold and a new record by .14 over Baldari. The battle heated up in prelims as they tied for top seed in 53.96.

Nava shot off the blocks to take the early lead, turning in 24.87 to Baldari’s 25.02 at the halfway mark. She began to extend her lead over Baldari on the back half, but St. John Neumann’s Maddy Burt had a big closing split, starting to run her down in 28.20. Nava’s lead was too much to overcome, however, as she finished in a new State Record time of 53.39 to Burt’s 53.62. Baldari followed for the bronze in 53.77. Later in the session, Nava returned to take gold in the 100 back in 55.10.

Last season, Tampa Catholic’s Christin Rockway brought home a silver and a bronze, but she traded up for a pair of golds this time around. In the 200 IM, Rockway used her breaststroke split to move ahead after swimming neck-and-neck with Baldari through the front half, touching the wall in 2:00.02 to outswim Baldari (2:01.28) by a second. Rockway followed that up with a 4:49.90 for 500 free gold.

Montverde’s Kaitlyn Schorr swept the sprints, getting her hand on the wall in close battles both times. In the 50 free, she hit the touchpad in 22.89 to clip Trinity Christian’s Chade Nercisio (22.93). In the 100 free, Schorr came from behind to swim past Pine Crest’s Andrea Santander, touching in 49.90 followed by Santander (49.99) and Nercisio (50.22). Santander won a gold of her own earlier in the session with a 1:47.02 in the 200 free. She’s now lowered her best time by nearly 2 seconds throughout the series.

thanks to who? carrying the team baby