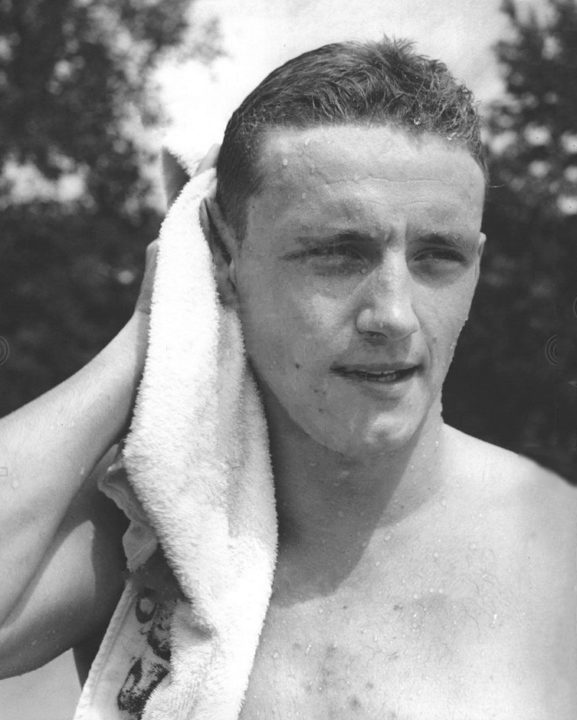 1956 Olympic gold medalist in the 200-meter fly Bill Yorzyk died on Wednesday at the age of 87.

At those 1956 Olympic Games in Melbourne, Australia, Yorzyk made history as the first swimmer to ever win Olympic gold in a butterfly event. The men’s 200 fly, then known as “dolphin-butterfly,” made its first appearance at those games after a contentious separation from breaststroke, while the 100 fly wouldn’t arrive on the Olympic stage until 1968, when Doug Russell won gold.

The women’s 100 fly also made its debut at the 1956 Olympic Games, but it was a few days after Yorzyk won his gold.

“You’ll find it nailed to the wall (at Linkletter Natatorium),” he told MassLive in a 2012 interview. “I gave it to the college out of gratitude because Springfield (College) and Red Silvia did so much for me. Besides, I feel that seeing the medal might inspire some of the young athletes on campus.”

It was at Springfield College where he did his early training in just a 20 yard pool.

Yorzyk’s set a World Record in the 200 fly in 1956 prior to the Olympics posting a 2:16.7. That swim, however, was done under the old regulations of the stroke, which are not recognized by FINA as a continuation of the same 200 fly World Records recognized today.

He set the standard for American men’s butterflying that has since seen the US win 10 out of the 16 Olympic gold medals on offer, including names like Mike Troy, Carl Robie, Mark Spitz, Mike Bruner, Mel Stewart, Tom Malchow, and the most decorated Olympian ever Michael Phelps.

Yorzyk, and American born in Northampton, Massachusetts, was inducted into the International Swimming Hall of Fame as an “Honor Swimmer” in 1971.

After graduating from Springfield College, Yorzyk went on to attend medical school at the University of Toronto, where he twice won the school’s scholar-athlete of the year.

Yorzyk went on to be an accomplished Masters swimmer, winning several USMS National Championships. In his life, he broke 14 individual Masters National Records in the 45-49, 50-54, and 55-59 age groups, plus 5 relay National Records, though all of them have since been broken.

Yorzyk served as a Captain in the U.S. Air Force Medical Corps, and he served as a radio broadcaster for the 1964 Olympic Games in Tokyo while finishing his military service in Japan. He served as the attending physician to the U.S. Embassy in Tokyo, to the US National Swim Team in Tokyo in 1963, and as Associate Physician to the Olympic Team in 1964.

Coach Bill Ruth, himself a former swimmer and Springfield College student, wrote this tribute to Yorzyk on Facebook:

I know alot of you are younger and possibly new to the sport, but there is a great history to the sport of swimming….

Excited to announce the “Wild Bill” Yorzyk Swim Challenge that will be held this August 7, 2022 in my father, Bill Yorzyk’s memory! It will go to provide a cause he loved, environmental sustainability of the local lake water. Check out more info and how to participate at http://www.wildbillswim.org !

Wonderful to see all the great tributes here, as of Thursday night at least.

To Springfield College swimmers, at least from 2000 onward, William Yorzyk was known simply as Doc.  As he hoped it would, his gold medal on the wall inspired many swimmers, not just the college swimmers but a lot of age groupers over the years practicing their dryland routines underneath the case holding the gold medal. Doc was generous with his time, occasionally hosting team diners and making us all feel like we were part of a larger swimming community.

For me, Doc was a mentor.  I swam his event, the 200 Butterfly, at his school and learned to swim the stroke at Pine Knoll, Red Silvia’s swim school in its final years of operation.  Having a shared swimming heritage helped… Read more »

For years, the Yorzyk family opened their home to Springfield swimmers and divers. They welcomed us as family and demonstrated incredible generosity & support to generations of 18-22 year olds trying to figure out life. I cannot say enough good things about Doc and Carol Yorzyk.
As the article states, you passed his gold medal entering the pool each day which served as an inspiration to all of us as to what is possible.
He will be missed dearly!

Always will be a legend we remember through the history books

I swam and trained with Bill during the summers at Yale, as Bill represented the Yale New Haven Swim Club.
Bill was the crucial leg on NHSC victorious 400 medley relay at Los Angeles 1955 (Kennedy, Hardin, Bill, Gidonese I enjoyed watching Bill
down hundreds of wheat germ capsules in between training sessions.

Thanks for the memory Pete Kennedy!

Hope you, and yours, are well and safe.