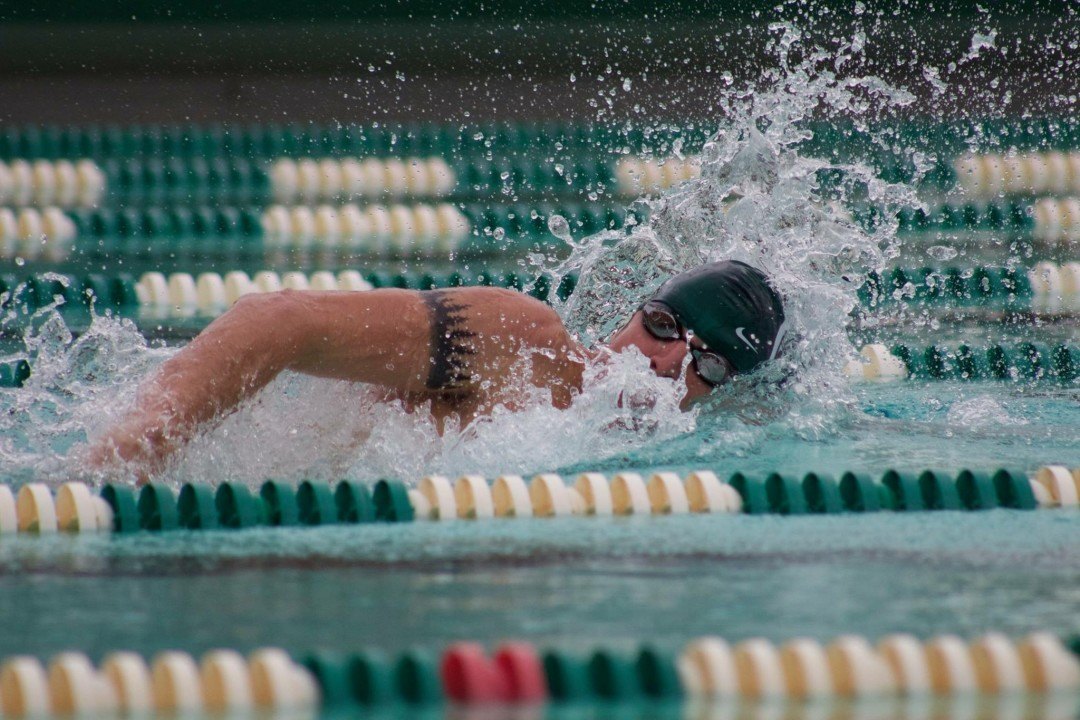 With just under a week left until the Purdue Boilermakers host the 2016 Big Ten Championships, our Senior Spotlights will... Archive photo via Michigan State Swimming & Diving

With just under a week left until the Purdue Boilermakers host the 2016 Big Ten Championships, our Senior Spotlights will now transition from the women of the Big Ten to the men. First up, we have Ian Rodriguez of Michigan State University, and the senior from Arlington Heights, Illinois is one of many Spartans ready to surprise the rest of the conference with his potential next week.

Although Ian Rodriguez’s progression on the NCAA level has been remarkable to watch, there is a very good chance that the 2016 edition of the Big Ten Championships will be the senior’s best one yet. Having gotten a taste of international swimming last summer by competing at the 2015 Puerto Rico International Open in Mayaguez, Puerto Rico, Rodriguez cruised to an event title with a time of 57.26. Not only did this make him the Puerto Rican champion in the event, but the swim also brought Rodriguez to exactly one second off the FINA ‘B’ cut for the 2016 Olympics. Given how FINA completes its Olympic qualifying selections, Rodriguez has had his work cut out for him all season if he wants to take a stab at making the Puerto Rican team in 2016.

With a proven track record when it comes to producing at the end of the season, and some serious motivation coming from his international agenda, the sky is the limit when it comes to Ian Rodriguez’s potential in his final Championship Season with the Spartans. Look for him to be instrumental in Michigan State’s scoring efforts next week.

School Major/Degree:  Hospitality Business
Favorite Event:  100 Back
Favorite Hobby:  I worked at a micro-winery in Denver, Colorado last summer so I got really into hiking and anything outdoors. I would try to go out to the mountains every weekend and explore the Rocky Mountains.
Favorite Music Artist: Bassnectar
Person You’d Like to Meet Growing Up: I was born and raised a die-hard White Sox fan so I have always wanted to meet Frank Thomas. I once caught a foul ball of his at Spring Training, though. I would say that’s a solid consolation prize.
Favorite Food/ Pre-Race Meal: My roommates make fun of me but I strictly eat: kale, extra lean ground turkey, pasta and egg whites. It works.

My sisters began swimming before I did and frankly my mother wanted to have all her kids in the same sport. I caught on to the technique pretty quick but 5:45 am practices were my mortal enemy. As a nine year old I remember crying almost every morning and there may or may not have been a few pancakes thrown out of anger and sleepiness.

My favorite memory thus far was last year at Big Tens in Iowa City, Iowa. I was put in the 400-medley relay and was leading off. To be totally honest, before the race my mind went blank because of the deafening screams and cheers from the other schools and fans in the stands. My whole body went numb, my heart was racing, and I had a rush of adrenaline flying through me that I will never experience again. I am getting chills just thinking about it, man.

You have some international experience under your belt, including a win in the 100 back at the 2015 Puerto Rico International Open in Mayaguez, Puerto Rico. How does swimming at an international event like that one compare to collegiate swimming, and do you feel like you took anything away from that competition that has helped you this season with the Spartans?

The atmosphere at an International event is relatively similar to an NCAA meet however the purpose is not the same. The race to the Rio Olympics is very individualistic and the qualification process is in the hands of FINA. The comparison of NCAA to FINA is quite humbling in the aspect of competition. At our Big Ten Championships we have the most depth in talent of any conference in the country, but internationally, I am competing against the cream of the crop.

It’s quite intimidating but I couldn’t ask for a more thrilling experience. After the meet in Mayaguez I walked away with a better grasp of professionalism that I have carried into my swimming at MSU. That being said, I have realized that a few chapters are complete but the book of my swimming career is long to be finished.

You competed at the AT&T Winter Nationals in December in Federal Way, Washington, and nearly matched your personal best in the 100 LCM Back. Do you feel like that meet has given you some confidence in your final Championship season?

I have gained great confidence going into Big Tens next month. Last October I broke my hand during a race at Iowa and the six-week recovery process finished about one week before the National Championships. I had to lock down on my mental game and really work my technique rather than pure strength. Also, it helped out an incredible amount to swim in the same meet as Michael Phelps. Swimming next to him was a mind blowing experience until I leveled with myself and realized I deserved to be in the meet he is in. However, it was still extremely humbling and unforgettable.

My family is incredibly important to me. Each member gives me individual insight that I could not find anywhere else.

My oldest sister, Erin, swam at the University of Illinois so she has a lot of collegiate experience under her belt and I know I can always go to her for advice.

My other sister, Angela, has always motivated and supported me through everything I do. She was always the hardest working student in the family so she taught me a lot on how to earn my achievements.

My older brother, Alexis, played hockey growing up and till this day will not let me win at any game/competition we have so he is where I get my desire to win. All three of them are extremely influential role models in my life.

My parents, Noreen and Fernando, are two of the greatest parents I know. My father will read his book during my meets but always seems to look up when I am swimming. He never forgets to say his classic pre-race line, “don’t drown”. My loving mother grew up with 12 siblings so she is the one that will give me the truth on what I need to improve on. She prides herself on “tough love”.

I plan on training at MSU throughout the spring and summer working towards qualifying for the 2016 Olympics in Brazil to represent Puerto Rico. Depending on how this summer turns out, after the swimming, I plan on moving to Europe to work and travel. However I do not plan on entirely hanging up the towel after the summer of 2016. I have a lot more barriers to break.

What should we look forward to from Michigan State as a whole at this year’s Big Ten Championships?

SwimSwam should look forward to Michigan State surprising a lot of people. We have gained a lot of experience and our work ethic has been second to none. Our program has serious potential to move up in the rankings as well as have many athletes score higher than ever. Go Green.