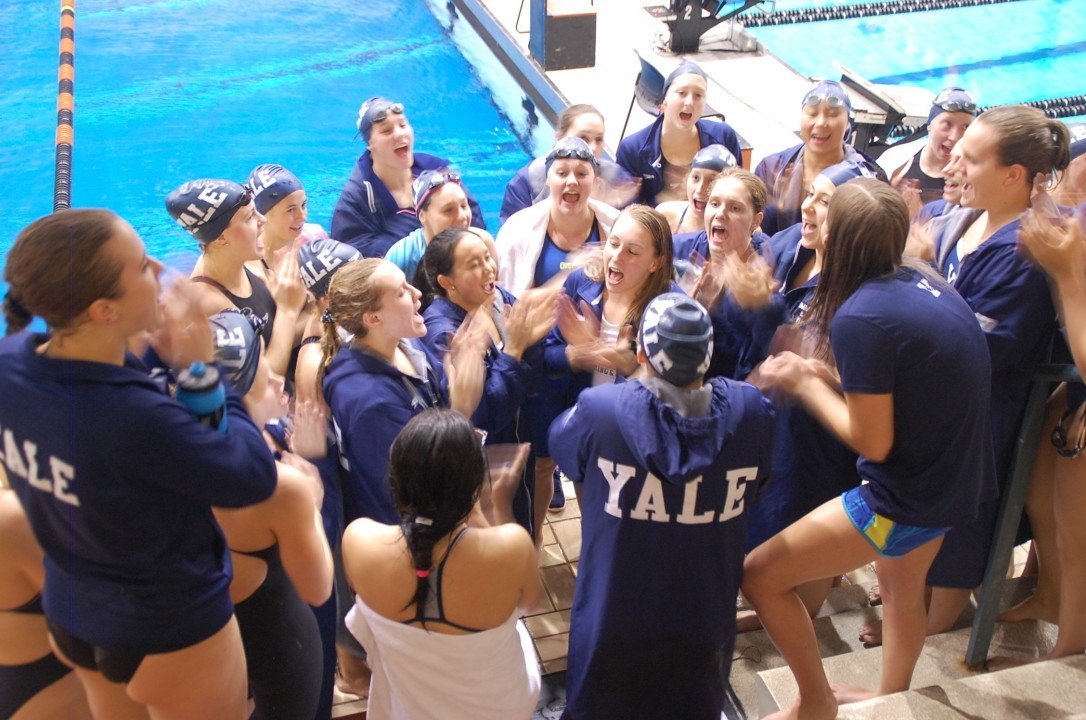 The Bulldogs already made history with their first HYP victory in twenty years- could they break the string at Ivy's as well? Current photo via Anne Lepesant

The 2016 Women’s Ivy’s will for the first time in many years have a legitimate three way battle for first place. Over the past sixteen years, only Harvard and Princeton have won championships. Brown was the last team other than those two to win. After the first day of swimming, Harvard leads. Both Princeton and Yale, who has improved tremendously under coach Jim Henry, are close behind. Of the rest of the teams, Penn distinguished themselves best by finishing 1-2 in the 500 freestyle.

Yale got its night off to a great start with a victory in the 200 freestyle relay. The team of Bella Hindley, Cassidy Richards, Maddy Zimmerman and Kina Zhou led the entire way to win in 1:30.65. Defending champion Princeton, despite returning three out of four members from last year’s team, managed third. Finishing in second was Columbia, with Jennifer Shahar breaking a near dead heat with the Tigers to push them ahead.

The University of Pennsylvania has staked a claim in this event. For the fourth time in five years, they had a swimmer win. This year, they did one better, with freshmen Madison Visco finishing second after sophomore Virginia Burns won her second straight title. The two were not seriously challenged through the race.

Yale filled in the next two places with Cailley Silbert and Olivia Jameson. As good as their first day was, they actually didn’t get distance star Eva Fabian in the championship final to go with those two.

Harvard can thank this event for their early lead in the event. The Crimson had four out of the top five finishers, with those four being the only swimmers they entered. Two freshmen, Meagan Popp and Sonia Wang, took the top two spots. Only Sada Stewart of Princeton could prevent Harvard from claiming the top four.

In the race for the championship, Yale was hurt by not putting any swimmers in the top eight, although they did have two in the consolation final. This event was dramatically faster than a year ago where no swimmers were under 2:00.

Yale scored another sprint victory when freshmen Bella Hindley took the splash and dash crown. The freshmen had qualified well ahead of the rest, but it was quite a bit closer at night, with Penn’s Rochelle Dong narrowing what was a four tenths of a second gap from prelims to just .07.

Princeton surged nicely on the backs of three swimmers in this, the top final. Defending champion Elizabeth MacDonald was the best of the three, scoring a third-place finish.

Diving is another event in which Harvard had a huge advantage over their competition. The Crimson once again had four of the top five finishers. Mikaela Thompson set a meet and pool record to win for them.

If Yale manages to upset either Harvard or Princeton in the 2016 Women’s Ivy’s , they will have their relays to thank. The Bulldogs won once again in the 400 Medley. Unlike the 200 freestyle, they couldn’t rely on getting out in front and staying there. They trailed Harvard by nearly two seconds halfway through the race. It was then that Maddy Zimmerman (52.27) and Kina Zhou (48.63) blew past the field to secure the win.

Harvard’s Jennifer Lee had by far the best backstroke split of the field (53.11), while Pennsylvani’s Haley Wickham was the best breaststroke (1:01.49).