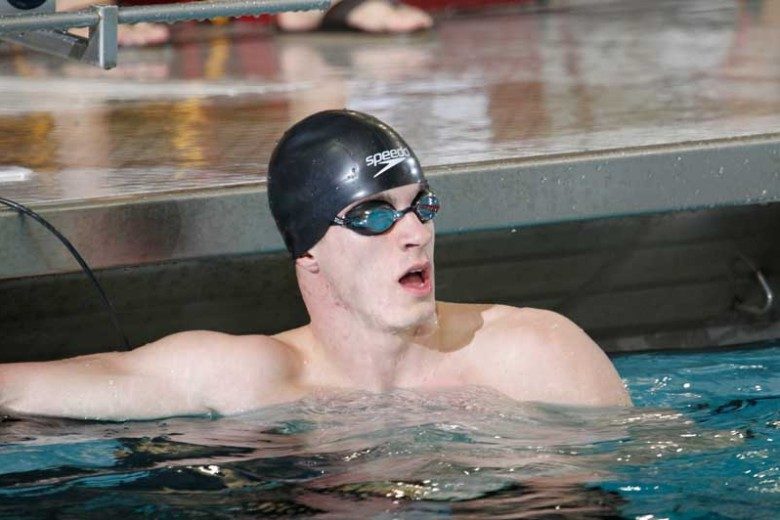 Over his collegiate career, Minnesota senior Derek Toomey has developed into a truly elite sprinter, and has been a key performer for... Current photo via University of Minnesota Swimming

Over his collegiate career, Minnesota senior Derek Toomey has developed into a truly elite sprinter, and has been a key performer for the Gophers for a number of years now. As a freshman, Toomey was the fastest rookie at the 2011 Big Ten Championships in the 50 freestyle (19.94), and one of only two freshmen to break 20 seconds overall, and he also anchored the winning Big Ten 200 freestyle relay. To cap off his Big Ten debut, he would also place highest amongst freshmen in the 100 freestyle (43.99), and would anchor the 2nd-placed finishing 400 freestyle relay.

Despite how impressive his freshman year was for the Gophers, Toomey has only gotten better as the years carried on. Last year, as a junior, Toomey shattered the team record in the 100 yard freestyle (42.60) during the prelims at Big Tens, and he would also set a new pool record at the Counsilman-Billingsley Aquatic Center in the 50 freestyle during his leadoff of the 200 freestyle relay with a 19.11 to boast. Additionally, Toomey would drop the fastest split of the entire Big Ten Championships during the 200 medley relay with a scorching 18.39 anchor leg .

Although Toomey amazed with his speed at Big Tens, his momentum carried all the way through NCAAs as he snagged third place overall in the 50 free with a 19.18 in finals. In prelims, he had bettered his personal best with a 19.10, and he would also approach his school record of 42.60 in the 100 free individual with a 42.75, which was good for 13th place.

Toomey would also received the opportunity to represent the University of Minnesota at the 2013 World University Games in Kazan, Russia. Despite it being his first taste of international competition, Toomey handled the intense pressure with class, and set long course team records in the 50 free (22.37) and the 100 free (49.76 relay lead-off). He would also earn a bronze medal via his preliminary leg on the 400 medley relay that would go on to take third in finals. He would also go on to compete at the 2013 US Open Championships, where he would take 6th in the 100 free (49.83) and 7th in the 50 free (22.54).

Minnesota has shown some formidable speed already this season, and their 200 free and 400 free relays are seeded 4th and 3rd respectively entering Big Tens this year. Much like other seniors already featured in this series, Toomey has had the opportunity to learn from All-American teammates older than him, and he has surely used this to inspire some of Minnesota’s younger sprint stars like Daryl Turner (20.49 50 free/43.79 100 free this season) and Paul Fair (20.63 50 free/45.57 100 free this season). Though he will have some very strong competition in the sprints this year, including Michigan’s Bruno Ortiz and Purdue’s Danny Tucker amongst a large field of talented swimmers across the Big Ten, there is little doubt that he will deliver for the Gophers one last time. With the amount of talent and pure sprint speed in Toomey’s arsenal, the only real question left is will anybody else be able to keep up?

School Major/Degree: University of Minnesota / Kinesiology
Favorite Event: The 50 free is my baby, but I also live for any and all relays (minus the 800 free relay haha)
Favorite Hobby/Hidden Talent: I participated in karate since I was 8 years old. I tested and was awarded my 3rd degree black belt the summer before my freshman year of college. I definitely miss it, but certainly was a fun hobby.
Favorite Movie: There are so many. Honestly, I might have to say Cloudy With a Chance of Meatballs. But Forrest Gump and anything with Leonardo DiCaprio is up there too.
Role Model Growing Up/ Person You’d Like to Meet: Muhammad Ali. I love boxing, and he just has an attitude and confidence level that seems awesome to be around.
Favorite Food/ Pre-Race Meal: My favorite food is everything edible. I love food. I wouldn’t doubt that almost all other swimmers feel the same way

Oh boy, there are a lot to choose from. Placing third at NCAAs last year in the 50 free was awesome, representing team USA in Kazan, Russia over the summer was unbelievable, but my favorite memory of all was my freshmen year as a Gopher. The University of Minnesota hosted Big Tens that year, and as a freshman I anchored the 200 free relay. Michael Richards started off the relay breaking the Big Ten (and team record) with a 19.05, Curt Carlson and Zach Bolin both posted 19.2s, and I anchored in a 19.2 as well to win gold and set a Big Ten record in that relay.

Over the summer, you received the opportunity to represent the USA at the World University Games in Kazan, Russia. What was that experience like for you, and how do you think international racing has benefited your approach to collegiate swimming?

That was an experience I’ll never forget. The whole team meshed so well, and so fast. Coaches, teammates, and all. It was definitely interesting to see all the different cultures from around the world. And it was very cool to see people from different countries getting along, trading items, and just chatting (after crossing the sometimes very difficult language barrier of course). Getting that feeling of racing internationally, and wearing the American flag on my cap while racing, only left me hungry for more. That trip has definitely motivated me to work harder to earn some more international opportunities.

What was it like setting the pool record at last year’s Big Ten Championships in the 50 free at Indiana University? How did that Big Ten performance along with your meet record performance in the 100 free set you up for your swims at NCAAs one month later?

My 19.11 at Big Tens was unbelievably surprising. I had a tough sophomore year at Big Tens and NCAAs, so being able to drop that much time, get the pool record, and be just a few tenths away from my school record and the Big Ten record was great.My 42.60 100 also surprised me and made me find a whole new love for the 100 free. Both of those swims set me up great for NCAAs. Going into NCAAs with those high seeds definitely got me pumped up enough to swim well there too.

Michael Richards was my biggest role model freshmen year, and ever since then I’ve always been looking up at the records he’s held and wanting to take them down. The 50 is without a doubt my favorite race and I would love to be the first Gopher to be under 19 seconds.

Where did the team go for training trip this year? What was it like?

We went to Waikiki, Hawaii. We spent nearly 3 weeks intermingling killer training with the beach and other fun activities. Despite Dennis Dale’s best efforts, his male sprinters survived the trip. We had both the Gopher men and women there. The time spent there strengthened our team in the water, and the bonds between teammates. We all came back from Hawaii itching to race fast and show off our tans.

My teammates. Every guy I swam with since my freshmen year. My teammates have made practices fun and challenging. I look forward to going to practices because of them. And it’s those guys that push me during sets. If I’m doing well they will step up to continue to push me, and when I’m struggling they encourage me to do better. I certainly wouldn’t be here without my teammates.

What do you plan on doing after you are done competing collegiately?

I am going to continue swimming. I didn’t start taking swim very seriously until right before my junior year of high school, meaning I’m just getting started with this sport. I don’t know where I want to continue my training yet, but I’ll be training somewhere. In the longer run, someday I want to go to physical therapy school and try to secure a job as a physical therapist.

What are your individual goals for the upcoming championship season? Surely you have the breaking of the 19 second barrier in the 50 freestyle in mind, but what else are you willing to share about your ambitions for February and March?

My two biggest goals are to 1) go best times in all of my events, you can never be unhappy about that. And 2) help my team out as much as possible. Both by scoring points, and whatever else I can do to make sure my teammates swims at their absolute best potential.

I don’t want to say too much, but I’m here to tell you that Minnesota will be surprising a lot of people this year. I guess you’ll all just have to wait and see what we’re capable of this championship season.

do you know chase stephens?

Over the last several years, Toomey has gone from being a Crabtree-level mediocre sprinter to an elite-level athlete. It’ll be interesting to see if he can break into the super-elite echelon with his performances at NCAA championships and Summer Nationals this year.