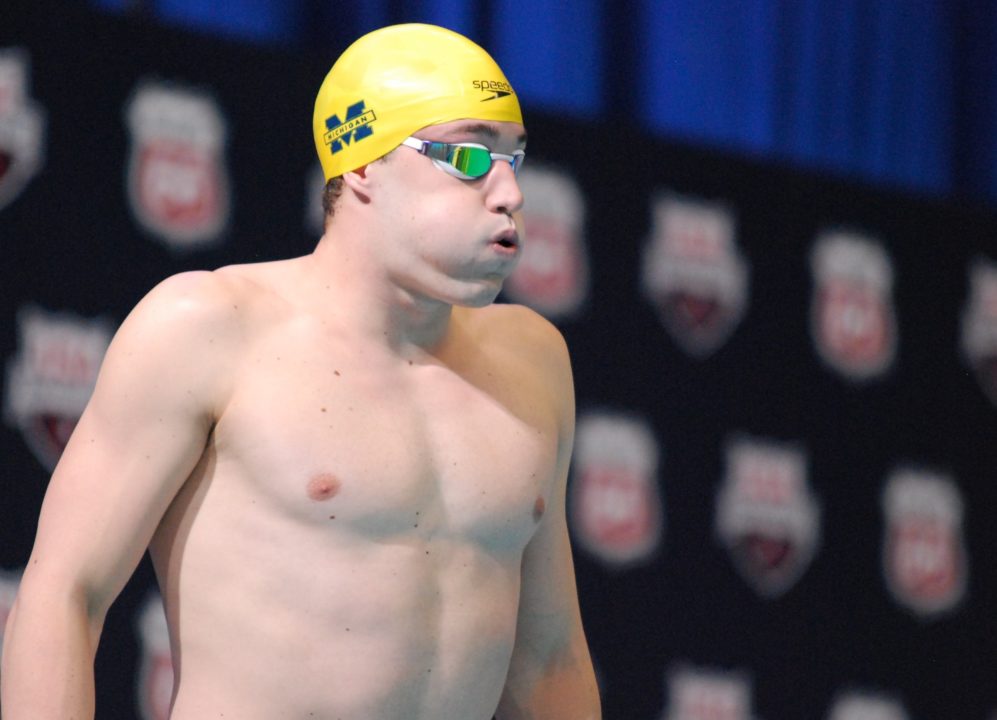 Michigan's Kyle Whitaker won the 200 IM after taking down the conference record in prelims and setting himself up as a major threat at the NCAA Championships with a pair of 1:41-lows. Archive photo via Janna Schulze/SwimSwam.com

Night two of the men’s Big Ten Championships will kick off at 6:30 Eastern Time in Ann Arbor. Michigan had a great morning at home, placing 6 in the top 8 of the 500 free and breaking a conference record with 200 IMer Kyle Whitaker. He’ll have to fight off the previous record-holder Cody Miller of Indiana, though, as well as his own teammate Dylan Bosch.

Minnesota’s Derek Toomey tied the Big Ten record set by his former Golden Gopher teammate Michael Richards in the 50 free. He’ll try to take sole possession of the mark tonight, and sits just .06 away from becoming the first man to go sub-19 at the Big Ten Championships.

The night will also feature 1-meter diving and the 400 medley relay.

Connor Jaeger, defending NCAA champ in every individual race above 400 yards, took home the first individual title of the 2014 men’s Big Ten Championships. The Wolverine senior went 4:12.52 en route to the win, outlasting a gauntlet of his Michigan teammates as well as the rest of the Big Ten’s best. This is about a second faster than he went at the conference level last year, and he was able to cut three seconds then to go 4:10.8 for the national title. If he could have a similar drop this year, he’d be in the relative ballpark of the 4:08.5 American record held by another famous Wolverine, Peter Vanderkaay.

The first non-Wolverine was Wisconsin’s Nicholas Caldwell, who went 4:16.00 in his first Big Ten appearance since transferring to Madison from the Florida Gators. Sean Ryan of Michigan took fifth, and Penn State’s Nicholas Ankosko broke up a pair of Wolverines, getting in behind Ryan and just ahead of top seed Hassan Abdel Khalik, who gained four and a half seconds from his 4:15.11 morning performance.

Michigan made it two in a row on Kyle Whitaker‘s 200 IM win. The senior went 1:41.30, just missing his Big Ten record from the preliminaries by .16 but still holding off a loaded field for the conference title. Whitaker was followed by sophomore teammate Dylan Bosch, who put up a fast 1:41.66, and looks like a contender to put his name on the record after Whitaker graduates.

The difference between the two was breaststroke, where Whitaker put up a field-best 28.53 to Bosch’s 29.07 that ranked second in the event. Otherwise, the splits were very even. Whitaker actually went out faster than Bosch on butterfly, which was a big statement, considering the South African is one of the conference’s premier butterflyers and the defending champ in the 200 fly.

Indiana’s Stephen Schmuhl was knocking on the door of 1:41 as well, going 1:42.05 for third place. He led a trio of Hoosiers: Eric Ress was fourth in 1:42.95 and defending champ Cody Miller fifth in 1:43.75. It appears Miller is probably not as rested for this meet as he was a year ago, when he destroyed the field with his 28.4 breaststroke split and went 1:41.85.

Wisconsin backstroke star Drew teDuits put up a 1:44.99 to win a big B final battle with Indiana’s Donald Hurley. Teduits triumphed on a 25.0 backstroke split, better than anyone else in the event.

He’s been the fastest sprinter in the Big Ten for awhile now, but Minnesota senior Derek Toomey finally got his first individual Big Ten title. After putting up the fastest 50 time in the conference last year but falling off at finals to miss the gold medal, Toomey decisively closed the door in this final, winning the event by two tenths. After tying his former teammate Michael Richards‘ conference record of 19.05 this morning, Toomey went 19.14 at night, coming back just a hair slower. He’s certainly got 18 seconds in his sights and should be an even bigger factor come nationals, where he finished third a year ago.

Penn State’s Shane Ryan was 19.36 for second place, dropping about a tenth to hang onto his number two seed. That was enough to beat last year’s Big Ten champ Bruno Ortiz of Michigan, who went 19.46. Purdue’s Danny Tucker, who had a huge summer and won the 100 free at U.S. Open, went 19.53 for fourth.

Indiana’s Anze Tavcar won the B final, touching out Penn State’s Shane Austin 19.91 to 19.93. Michigan’s Vinny Tafuto was also under 20 in that heat, and C final winner Matt McHugh of OSU put up a 19.91 of his own in what was an outrageously deep event – 16 different men went sub-20 between prelims and finals.

Michigan held off rivals Ohio State to remain undefeated in relays for the weekend. The team of Jason Chen, Richard Funk, John Wojciechowski and Bruno Ortiz went 3:06.08 for the title, topping OSU’s 3:06.63. Most notable on that relay were the splits from juniors Funk and Ortiz. The Canadian Funk was 50.92 on breaststroke, likely the fastest of the field (although defending 100 breast champ Cody Miller’s split was lost in a touchpad error), and Ortiz also had the event’s best split in his stroke with a 41.89 on freestyle.

Ohio State went 3:06.63 for second – that was thanks to a 45.0 butterfly split from freshman Matt McHugh, who’s come up big twice already tonight after his sub-20 50 freestyle. Also quick on that relay were backstroker Connor McDonald (46.5) and freestyler Michael Disalle (42.2), also a freshman.

Indiana wound up third, though none of their splits were correct on live results. The Hoosiers went 3:07.98 to just beat Penn State’s 3:08.01, which was powered by Nathaniel Savoy‘s 46.2 backstroke split, the fastest of the field.

After two days, Michigan is firmly in command with 308 points. Indiana sits second, nearly 100 back but also more than 50 up on Ohio State. Penn State, Minnesota, Wisconsin and Purdue are all in the thick of things for the next few spots, with plenty of great racing still to come in Ann Arbor.

Will we see 1:39 or 1:29 first? on a flat start? 200 IM vs. 200 free. My guess is that there’s a dozen guys walking around capable of both in the post-grad or international ranks, so it’s more a question of who can put it together in yards first.

Yes. I love this conversation. One of the downsides of college swimming is that our stars are swimming so many times in just 3 days. I think that the team dynamic(swimming for each other and a common goal, representing your uni and it’s history and future, etc.) along with their talent and their coaches’ talents, allow these stars to drop the fast times that they do.

But what if they were competing like they did in high school?…a couple individuals and a couple relays, with an easy prelim schedule the day before. Or like a champ trials type meet, with a few individuals over a week’s time? These same athletes would be going faster, likely already at 1:39/1:29. And… Read more »

Apart from a fully tapered Yannick Agnel, I don’t see who is able to swim 1.29.

Michigan is going to be giving up a lot at NCAA’s with a 47.6 leadoff for their 400 medley.

Michigan doesn’t have to worry about the 400 medley. I agree with JMAN.

Yeah there is something about a team chasing a title, where the names of the swimmers start to fade from their caps, and it becomes a team effort. Essentially, someone – Chen or otherwise, will step up and swim as needed. I’ll use an example I’m familiar with: Cal men always have at least one totally unexpected relay swimmer step-up. Tony Cox and Guy Barnea, all ten feet of them combined(just kidding guys), stepped in on 2free relays at NCs as if they were 6’7″, despite being straight up backstroke specialists. Both went to 15 off each wall.

ole 99 – assuming you mean Indiana, that’s about the best I could get when trying to make heads-or-tails of those splits. Those splits make sense – too bad the bads got messed up, because that’s a crazy-fast front half.

For the love of smart swimming fellow coaches, show your kids the splits for the A heat of this 500! Top 5 negative split, 6th basically even split it. 7&8 were solid swims in their own right. If you want to go fast you gotta swim smart!

As I tell my swimmers when it comes to anything “distance”: “no one ever remembers who won the first 50 of the mile.”