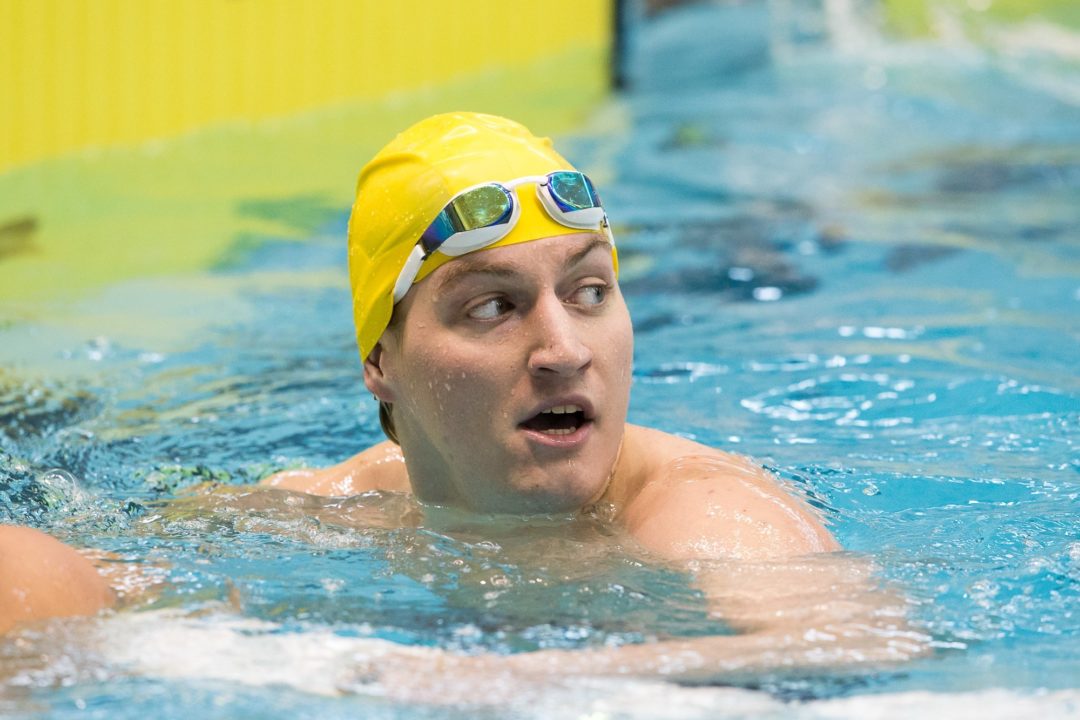 Michael Wynalda broke the Big Ten record in the 200 free and is knocking on the door of the second 1:31 in the NCAA this season. Archive photo via Tim Binning/TheSwimPictures.com 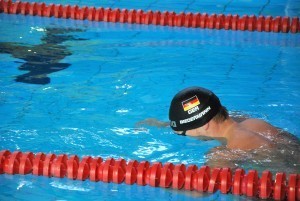 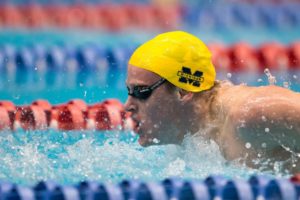 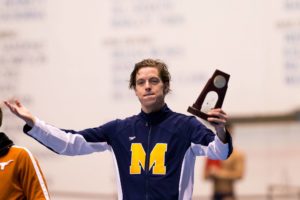 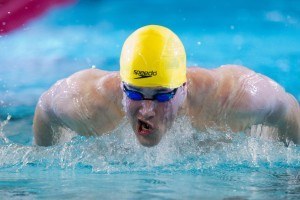 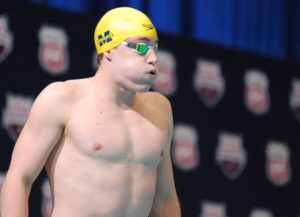 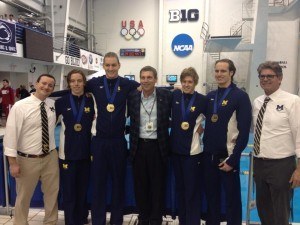 Outside of Michael Wynalda’s mind-bending relay split Wednesday night, the story of the meet so far for Michigan has been senior Kyle Whitaker. Viewed as a world-beater out of high school, Whitaker has been a consistently solid college swimmer, but hasn’t quite grabbed headlines the way some anticipated he could when Michigan snagged him in recruiting back in 2009. It’s all seeming to come together for the versatile Wolverine, now, though: he won the 200 IM on Thursday with a new Big Ten record of 1:41 that should put him right in the thick of things for a national title, and now he’s grabbed another IM top seed with another impressive morning swim.

Whitaker went 3:38.93 to easily pace prelims of the 400 IM. He leads teammate Dylan Bosch by nearly 3 seconds, and perhaps more importantly, is only nine-tenths off the Big Ten meet record set by Michigan superstar and eventual Olympic gold medalist Tyler Clary. That’s one of the faster conference records out there, even faster than last year’s NCAA champion Chase Kalisz. Of course Kalisz put up an absurd 3:36 last weekend, but Whitaker still looks like a legitimate factor in the A final of this event come the national championships.

After Bosch was a third Wolverine, Connor Jaeger, who went 3:43.49 despite likely being not fully rested for this meet. Indiana’s Stephen Schmuhl is fourth in 3:43.56 before Michigan’s 4th and final A-finalist, Ryutaro Kamiya‘s 3:44.11.

Minnesota freshman Jakub Maly rounds out the first wave of prelims swimmers at 3:44.98; after him the final two championship finalists are Tamas Gercsak of Ohio State at 3:47.41 and Purdue’s Guillermo Blanco at 3:48.46.

Golden Gopher Brandon Hatanaka leads the B final with a 3:48.66.

Coming off a fast medley relay split Wednesday night (20.1 and out in 8.9), Ohio State’s Tim Phillips is the clear #1-seed going into tonight’s 100 fly final. He went 45.57 to lead the field by half a second, and he’s also only a tenth off of the meet record set by Michigan’s Chris Brady back in 2009.

Ohio State put three up in the race, with Garrett Trebilcock going 47.28 for seventh; their top competition for second place at the moment is Indiana, who snuck one swimmer into the final, Max Irwin in 47.67.

Michigan State will get their first individual swimming points from Bryan Williams, who leads the B field with a 47.74.

No surprise here: after an earth-shattering relay split on the 800 free relay Wednesday night, Michigan’s Michael Wynalda is the top seed in the men’s 200 free. He went 1:32.14 to set new Big Ten meet and conference records by over a second, knocking last year’s champ Anders Nielsen and Wolverine Olympic legend Peter Vanderkaay off the books. His 1:30.6 split Wednesday would suggest he’s got even a bit more in the tank for tonight. Could we see another 1:31 to challenge the nation’s top time put up by Louisville’s Joao de Lucca back in December? Keep an eye on lane 4 tonight for the answer.

Despite Michigan’s dominance in that 800 free relay, the conference really stepped up to keep things from becoming a Wolverine rout in this event. Wisconsin transfer Nick Caldwell is the 2-seed at 1:34.10, just ahead of Josh Fleagle from Ohio State, who went 1:34.14. Fleagle’s teammate Michael Disalle is fourth in 1:34.41.

Of course, Michigan has their tough mid-distance freestyle corps just waiting to pounce should any of those swimmers struggle at finals. Hassan Abdel Khalik, Anders Nielsen and Justin Glanda all went 1:34s for the next three seeds, with Wisconsin’s Tyler Hines putting up a nice drop for a 1:35.53 8th place.

This is a tough field: it took that 1:35.5 to make the top 8, and three more men went 1:35s and got left out, led by Ohio State’s Rowan Williams. The final scoring time is a 1:36.39 from Northwestern’s Chase Stephens.

A Michigan 1-2 leads the field in the 100 breast – it’s actually Bruno Ortiz who sits first, getting under 52 for the first time in his career at 51.92. Richard Funk is behind him at 52.05 and defending champ Cody Miller of Indiana went 52.23 for third. It’ll be an interesting showdown tonight: Funk and Miller were both 51s last year, with Miller breaking the Big Ten record at 51.50. He appears to be maybe a little less-rested, this year, though, after struggling to hang onto a taper at NCAAs last year, so we’ll have to wait and see if he’ll have enough in him to win his 4th-straight Big Ten title and leave the conference meet undefeated in that event for his Big Ten championships career.

Those three are the clear first tier – the next seed is Purdue’s Lyam Dias at 52.90 – he’s kind of directly in the middle, a bit behind that top trio, but safely ahead of the rest of the A final. Iowa’s Andrew Marciniak will be the Hawkeyes’ first A-finalist after taking 5th in 53.58, and his teammate Roman Trussov joins him in the A heat after sneaking in to 8th. Between the two are Michigan’s Matt McNamara and Aussie Nicholas Schafer of Wisconsin.

Narrowly avoiding a swim-off were Daniel Macdonald of Ohio State and Kyle Duckitt from Michigan, who tied for 9th at 53.81. Knowing the rivalry between those two schools, that swim-off might’ve been the loudest moment of the morning; as it is, the two will still tangle in the B final tonight.

The Penn State Nittany Lions got their first A-finalists of the morning in the 100 back, and they came double. Shane Ryan holds the top seed with a 45.48, and teammate Nathaniel Savoy is second in 45.86. Those are the only two swimmers in the field under 46 seconds, as Indiana’s Eric Ress went 46.06 for third. Ryan is also just .37 off of Ress’s meet record from 2011.

IU also put up two A-finalists. James Wells followed Ress in at 46.38. As this is Michigan’s notably weakest event, it serves as a big opportunity for other teams to make up points, as well as slide more swimmers into the A final without the usual horde of Wolverines grabbing half the spots (over the first four events, Michigan place 4, 3, 4 and 3 swimmers up).

Wisconsin’s 200 back star Drew teDuits sits 5th in 46.46 and Iowa continued to have a strong morning, putting Dustin Rhoads in 6th. Michigan did get an A finalist in the event, and John Wojciechowski‘s 46.66 should come as a very welcome sign for the Wolverines, who got just a 47.6 out of their backstroker on the 400 medley relay last night, forcing them to dig out of a big hole to defend their conference title. Just a moderately strong backstroke split on those medleys should allow the buzzsaws on the back half of Michigan’s medleys to wreak havoc on the field at NCAAs.

Ohio State freshman Matt McHugh beat out his older teammate Connor McDonald for the final A heat spot in 46.98. McDonald, a 200 specialist, will lead the B final at 47.07.

It was another great morning for Michigan, who appears to be runaway favorites for their fourth consecutive titles. But Ohio State also had a strong preliminaries, putting 7 up and 10 down to help make up ground on Indiana for second – the Hoosiers currently lead by 58. Penn State loaded up the B finals with 7 swimmers down as the Nittany Lions look to hold off Minnesota, Wisconsin and Purdue for fourth.