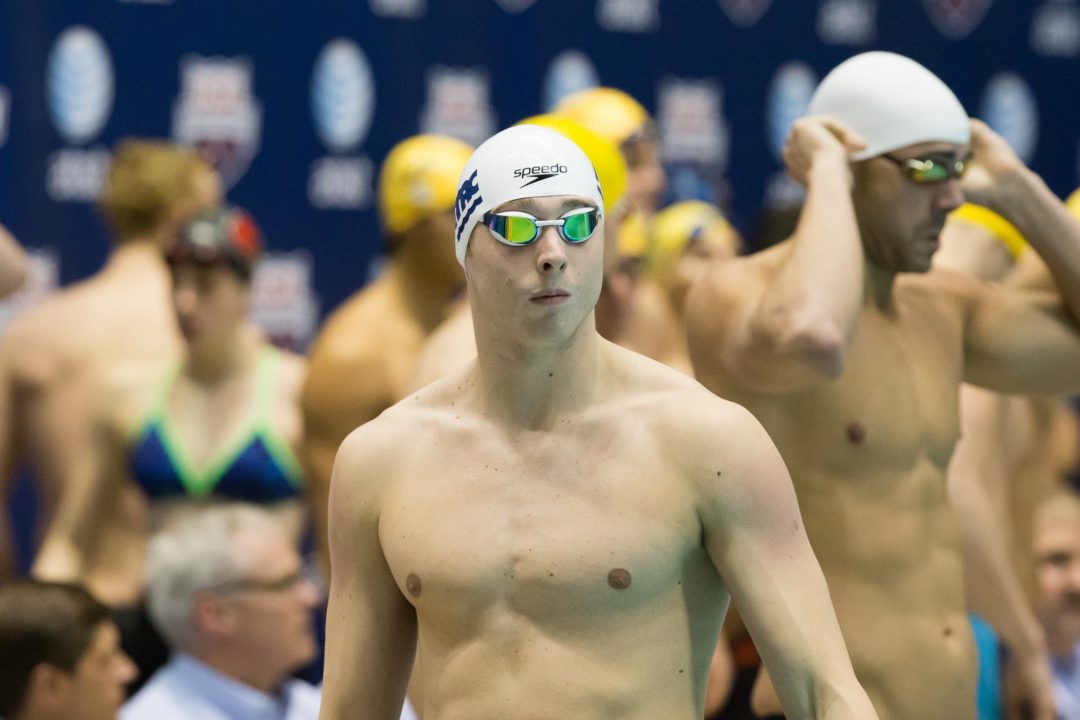 Ohio State's Tim Phillips has been fast at this week's Big Ten Championships, despite recovering from a torn muscle suffered just two weeks ago. Archive photo via Tim Binning/TheSwimPictures.com

Ohio State’s Tim Phillips has been tearing up the 2014 Big Ten Championships in the butterfly races, having split a 20.13 in the 50 fly on Ohio State’s 200 medley relay on Wednesday, and then added a 45.57 in the 100 fly in prelims this morning.

Those times stand alone as extremely impressive, the second-best time in the country, and should put him in contention for an NCAA Championship in a few weeks in Austin. What makes them even more impressive, however, is that Phillips is coming back from an excruciating injury to his right pectoral muscle.

While discussing the injury with us today, Phillips said “I suffered a grade 2 (pectoralis major) tear from a weight room incident on February 12th. I have been rehabbing intensively since then and have made significant progress, though I still have a little tightness and an extremely minor pain from that tightness.

Phillips is a redshirt senior, having taken off the 2011-2012 season to focus on Olympic preparations. He was in Charlotte in the first semester of this season training with SwimMAC Carolina and completing an internship before rejoining the Buckeyes’ collegiate squad in January.

With a lot of expectations around Phillips, who arguably came into the season as the favorite in the 100 fly nationally, that injury just two weeks out of Big Tens could have been a disaster. Keep in mind with no qualifying times yet because he missed the fall semester.

Instead, Phillips has been on-fire (who at the Big Ten Championships hasn’t been?) and has wrenched himself back into the conversation for that national title with Arizona’s Giles Smith apparently dealing with some injury as well.

With the typical recovery time from this kind of injury being between 2 and 6 weeks, Phillips’ quick turnaround on the bottom end of that spectrum is impressive, and speaks to both his physical conditioning and his mental toughness.

I agree with your assessment of “extremely impressive”. You’d never know he was injured from his swims so far. But if it’s indeed a grade 2 tear, and not just a grade 2 strain, I have to say I’m surprised he’s swimming at this meet so close to NCAAs. Unless you have to swim at conference to be eligible for NCAAs?? If it was a pec tear, the recovery time was incredible. Two weeks is short for a pec. Hope it holds up as it’s going to be a great showdown in Austin.