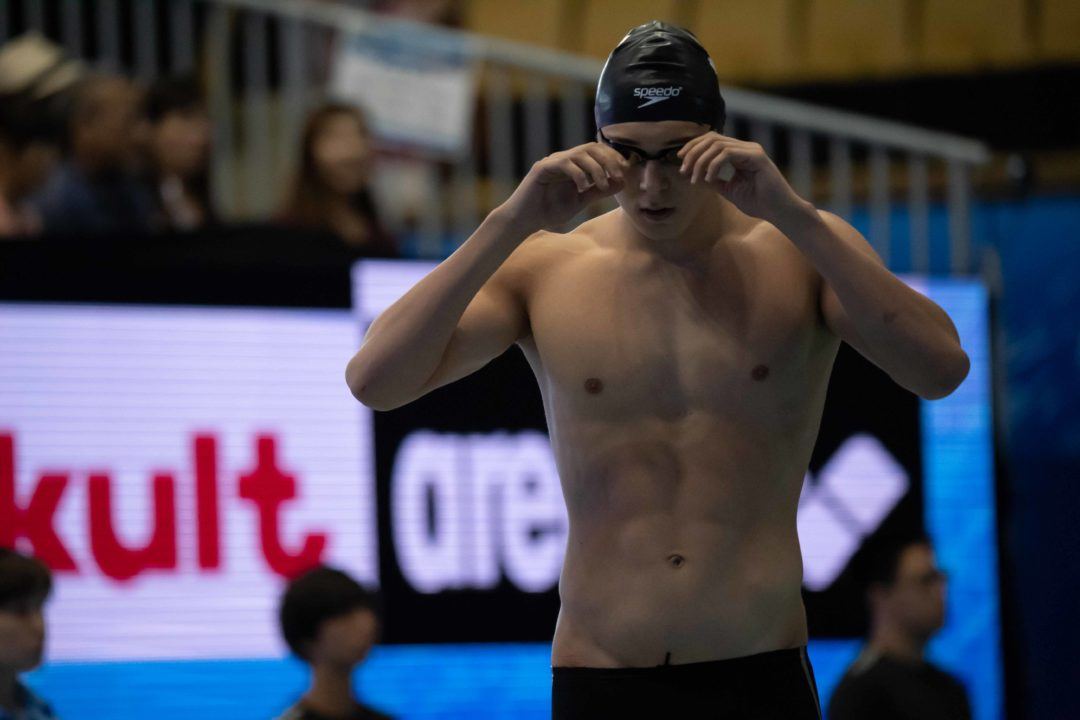 1:34.8/42.5/19.3 freestyler Ruslan Gaziev will return to the active roster for the Ohio State Buckeyes this season after an Olympic gap year. Archive photo via Mike Lewis/Ola Vista Photography

20-year-old Rafael Miroslaw, an IU ’25 commit, has pulled out of the 2021 German Olympic Trials due to a shoulder injury that halted training for 3 months.

1:34.8/42.5/19.3 freestyler Ruslan Gaziev will return to the active roster for the Ohio State Buckeyes this season after an Olympic gap year.

The school confirmed this week that Gaziev will return to Columbus to take classes and compete for the Buckeyes in the coming NCAA season. Gaziev was an impact swimmer for Ohio State as a freshman in 2019, qualifying for NCAAs and splitting 18.9 on the team’s 200 free relay. He was a three-event Big Ten finalist that year, swimming the 50, 100 and 200 frees.

Gaziev should have three years of collegiate eligibility remaining. He’s one of Canada’s top sprinters and should still be in the mix for an Olympic bid, with the Tokyo Olympics now postponed until the summer of 2021.

Armstrong (career-bests of 19.7/42.7/1:35.8 in free) and Gaziev should both be sophomores this year, eligibility-wise, and will help cover for Loy’s and Abeysinghe’s absences on the freestyle relays.

Is Cameron Craig coming back to the Buckeyes in the fall? If so, OSU could be in a position to compete for the B1G title with Michigan losing so many points

Cameron told us a few weeks back that he would not be returning to the Ohio State swim team, but that he is still planning to swim. He didn’t say if that was in college or not.

His 2nd DUI charge has not been adjudicated yet, it’s been put on hold because of corona.

Maybe it’s time to stop bringing up the DUI’s and just let him move on. Leaving your comment at
“Cameron told us a few weeks back that he would not be returning to the Ohio State swim team, but that he is still planning to swim. He didn’t say if that was in college or not.” Would suffice. Continuing to remind people isn’t helping anything. Just leave the kid alone.

They’re just reporters reporting the news my friend. That’s what they do.

Understandable for sure! But, it’s also important to think of how their comments might be affecting Craig. Just pointing out that it might be nice to show some respect and provide less publicity. He’s had 3 articles about it already, I’d be quite bothered to see a fourth.

What happens when he has a third charge and injures someone, would they NOT report it??

Getting two DUIs in a very short period of time isn’t exactly something we should pretend didn’t happen. Recklessly putting lives in danger by driving on the freeway with a BAC of more than double the legal limit should mean you lose your right to have your feelings protected in a public forum.

He is going to have to live with these choices he made moving forward. These are going to follow him for some time. No passes after a second DUI. He did it, it happened. He’s lucky he did not hurt anyone!

Glad to hear that the primary concern of Cameron and his buddies are “the impact that his DUIs will have on Cameron Craig.”

Meanwhile, he hasn’t made any statement of remorse about how it impacts others. His teammates, who were counting on him, who he let down; the other motorists that he shared the road with; the coaches who took a chance in bringing him to Ohio State and now have to deal with this fallout.

Every day in the United States almost 30 people die in drunk-driving accidents. Let’s pour one out for them. Literally. Pour your damn drink out and don’t get behind the wheel.

I get it…all of it…but this article isn’t about Cameron Craig, DUI, or empathy vs no empathy. It’s about Ruslan and his return to an even more powerful Buckeye sprint group. O…H

I can appreciate what you’re feeling for Cameron and his future.

That being said, the DUI adjudication is relevant as it’s unlikely that another NCAA program will bring him on until the 2nd case is settled.

Great news!!!!! Ohio State has to be chomping at the bit to get their team back on campus to train (Gaziev, Andreis, Armstrong, Delakis, Fleagle, McDermott, Pohlmann all 19’s…let the competition begin and the cream rise to the top)… B1G speed = B1G relay points = B1G title…Go Bucks!!!!

Gonna be a big year for Ohio State Sprint, they’ll need it as their distance is non existent

Ya ever heard of Charlie Clark