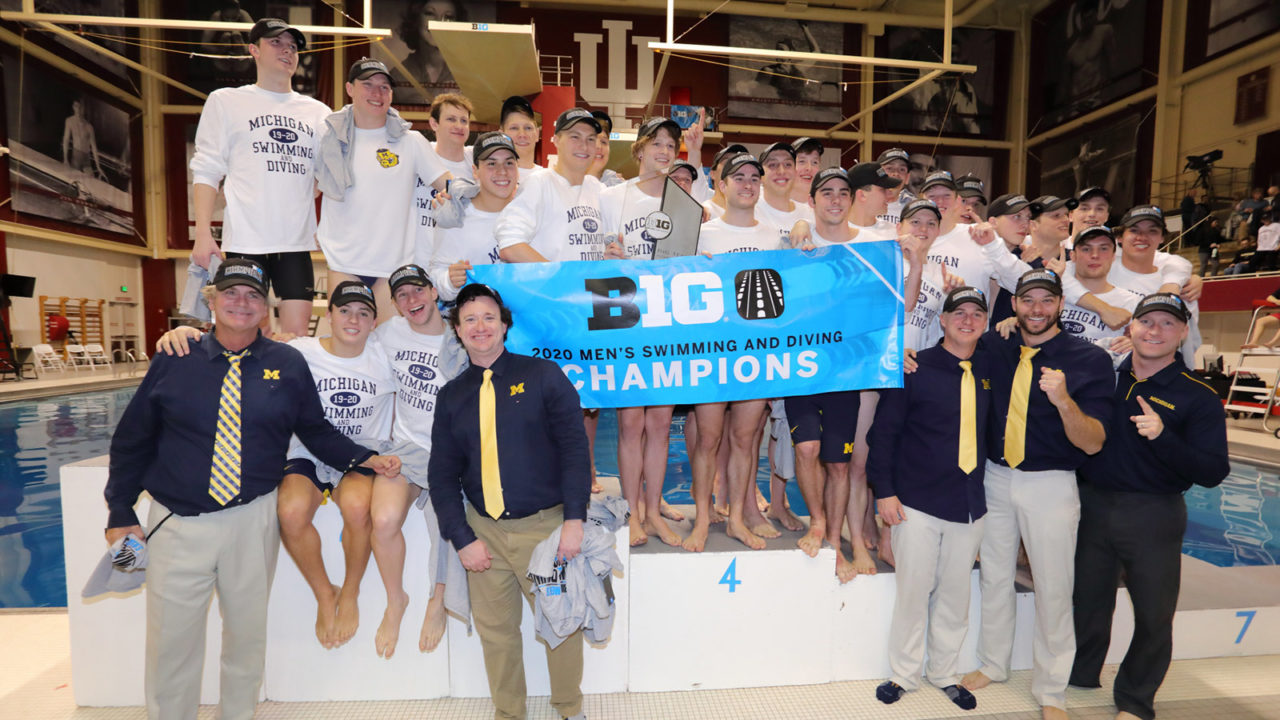 The Michigan men (above) are the defending Big Ten Champions in swimming & diving. The new four-and-a-half day format could benefit them after two weeks out of the water because of COVID concerns at the university. Stock photo via Michigan Athletics

After a meeting on Wednesday, the Big Ten swimming coaches have agreed on a format for the new four-and-a-half day championship format being used this year to mitigate risks of the coronavirus pandemic.

As SwimSwam reported Wednesday, the women’s Big Ten Swimming Championships are set for February 23-27 in Minneapolis, while the men’s championships are slated for March 2-6 in Columbus. After reaching out to several Big Ten coaches, SwimSwam was able to confirm yesterday that the conference meet schedule has indeed been expanded to a 4.5-day format. The Big Ten Men’s & Women’s Diving Championships will be held separately this year, from February 24-27 at Purdue.

The reasoning for this change is to reduce the number of individuals at the pool at any given time, so as to adhere to COVID-19 safety protocols. Currently, this format change is considered to be temporary, just for this season.

SwimSwam has obtained the full meet schedule for the new, longer format:

The first two days of competition will feature the same events as usual (aside from the diving events, which will be held at a separate site).

Though Saturday’s slate of events are what we’re used to, with the exception of no 200 fly, the order of events has also been altered.

The 100 free, which is typically after the final heat of the 1650 free and the 200 back, has been moved to the first event of Saturday’s finals session. This was done to give the 400 free relay swimmers, many of whom will be in the individual 100 free, more time between their races.

In addition to altering the schedule to help relay swimmers have more time between races, the splitting of the 100 fly and 100 back into multiple days will allow for underwater specialists to race both events without having to swim a double and potentially a relay.

The schedule the Big Ten has adopted for this season is nearly identical to the 4.5-day schedule the SEC has been running for years. The daily slate of events are exactly the same, except that the 200 free and 400 medley relays are swapped. This was done because coaches figured that the likelihood of 100 breaststrokers and 200 butterfliers would be on the 200 free relay was lower than the likelihood that they would be on the 400 medley relay.

Other than that, the only difference is the order of events within each day. The SEC swims most of the relays at the beginning of the session, rather than the end. Here is the breakdown of how the two schedules compare:

Such copycats of the amazing SEC