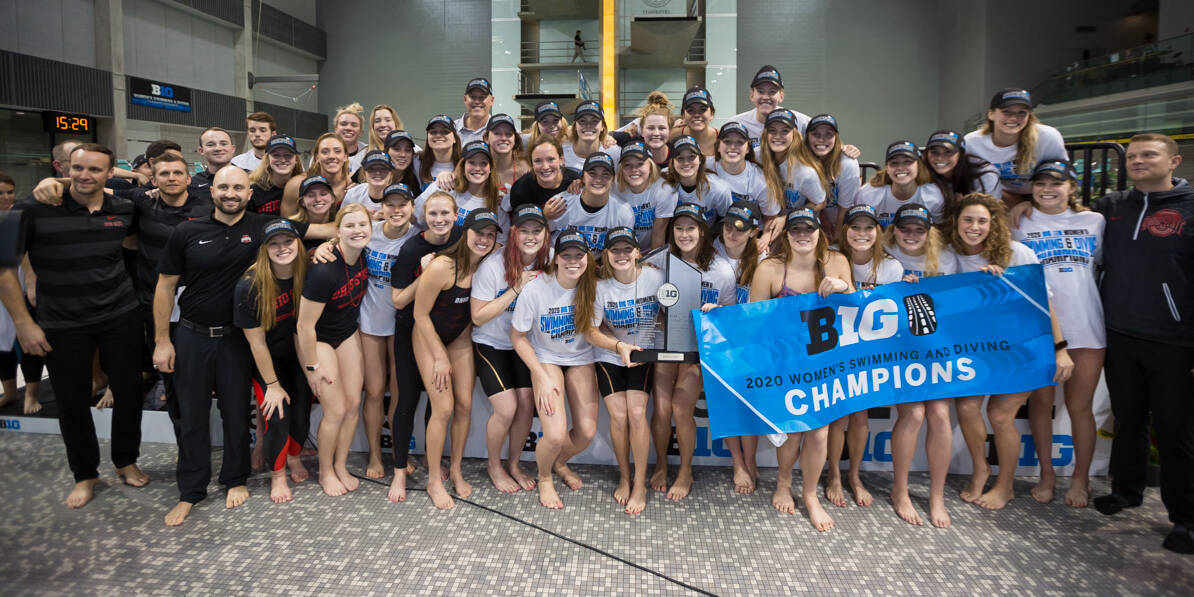 The Ohio State women (above) and Michigan men were the 2020 Big Ten swimming & diving champions. They'll face a new format in their title defenses this year. Archive photo via Ohio State Athletics

The Big Ten Conference is moving to a four-and-a-half day championship format for the 2021 men’s and women’s swimming & diving championships that begin later this month.

Last week, Ohio State announced via a press release that the Big Ten men’s championships would be held from March 2 – 6. This spans 5 days of competition, which is a day longer than the meet is usually held.

Initially, SwimSwam assumed this was an error. But, after a spokesperson from the school verified that those were the dates received from the conference, SwimSwam was able to confirm with multiple conference coaches that the present plan is to host four-and-a-half day championships.

Meets will be held Tuesday through Saturday, with the first day being an evening-only session, and continuing into four days of competition. Coaches are meeting on Wednesday to try to nail down the exact schedule, but are planning to somewhat mirror the 5-day SEC Championship format that has been used for the last few seasons in that conference, though there are expected to be some deviations.

Coaches have told SwimSwam that the idea behind stretching out the conference championship meet is to reduce the number of individuals in the building at any given time amid the COVID-19 safety protocols. At present, the change is being planned as a temporary shift for this season only to deal with the complications of the pandemic.

Ironically, the SEC this season will move to a more traditional 4-day championship format, which includes splitting their men’s and women’s meets (they usually hold a combined-gender event).

The Michigan men won the 2020 Big Ten Championship, ending a 3-year Indiana title streak. On the women’s side, Ohio State pulled off a surprisingly-dominant victory over arch-rivals Michigan.

The Indiana men and Ohio State women were scheduled to return the most points for this season from last year’s conference rosters, based on eligibility, though a number of other factors in the pandemic season will impact the outcomes.

Push NCAAs to April and push conferences like all the non-Power 5 schools. Makes sense, gives these schools more time to train!

Is umich still in quarantine? Could change a lot

They are through Feb 7th, and the basketball team has canceled games through the 11th.

0
0
Reply
Time For Barta To Go
Reply to  Bula

Quarantine applies to college sports in Michigan? When did that change?

While I am happy that the championships are continuing, the 5 day format may end up hurting some teams. We’ve already seen 2 B1G teams cut because of financial reasons. Is moving to a 5 day format really the best idea, especially given the fact that it will significantly increase the financial burden these teams will have to endure?

Plus, don’t they need to go to class?

With an overwhelming number of classes virtual, this isn’t as big of an issue

Travel is the same. It’s ONE extra day at the meet. I have trouble believing that’s going to break a budget.

Classes are remote anyway – if swimmers have an off day (they’re not swimming any extra events) – they can go to class swim anywhere.

The Hoosiers will once again reign supreme and win by massive amounts! Nobody can stop Coach Looze and IU! Go Hoosiers!!

Ease off the caffeine bro

Just great that it appears there will be championships and an NCAA meet this year! – its been a long drought for us fans.

Braden – the 5-day schedule may be accurate, but I’m pretty sure “December” is not!