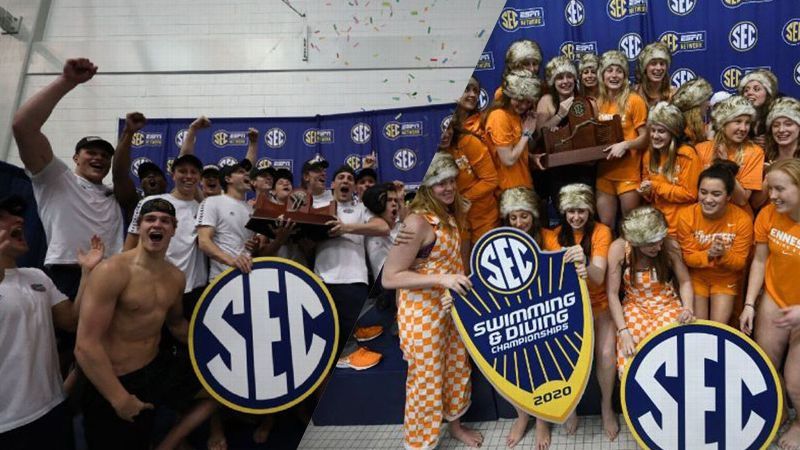 As SwimSwam first reported in November, the SEC has announced a plan to split the 2021 SEC Swimming & Diving Championship meet into 3 separate events.

The SEC has confirmed a plan to split their men’s and women’s meets for 2021 in an effort to mitigate the risks of an ongoing coronavirus pandemic.

The 2020 SEC Championships featured about 232 women’s swimmers and 195 men’s swimmers competing. There were about 57 divers, with women and men combined. That means the proposal would split a nearly-500-participant SEC meet into three separate competitions, all with 250 or fewer participants – not including coaches, officials and other staff.

The 2020-21 SEC men’s and women’s swimming & diving season began in October and will conclude no later than January 25, 2021 with regionalized competition permitted upon the adherence of opponents to SEC Medical Guidance Task Force Requirements for COVID-19 Management. Contests are limited to a dual-meet format unless alternative strategies are identified to limit the overall number of participants to ensure appropriate distancing. The number of events is at the discretion of each institution.

The University of Florida men won their 8th-straight SEC Championship in 2020, while the Tennessee women won the 2020 title, breaking a four-year winning streak by Texas A&M.

I thought, since Iowa has disbanded it’s swimming teams, that the men’s meet had been moved out of Iowa.

This is a easy and logical way to cut the meet in half but still have the meets. Most major conferences already do this split.

Not in pools that big. You can put athletes in spectator seating area 6 ft apart.

Glad they’re still having the meet