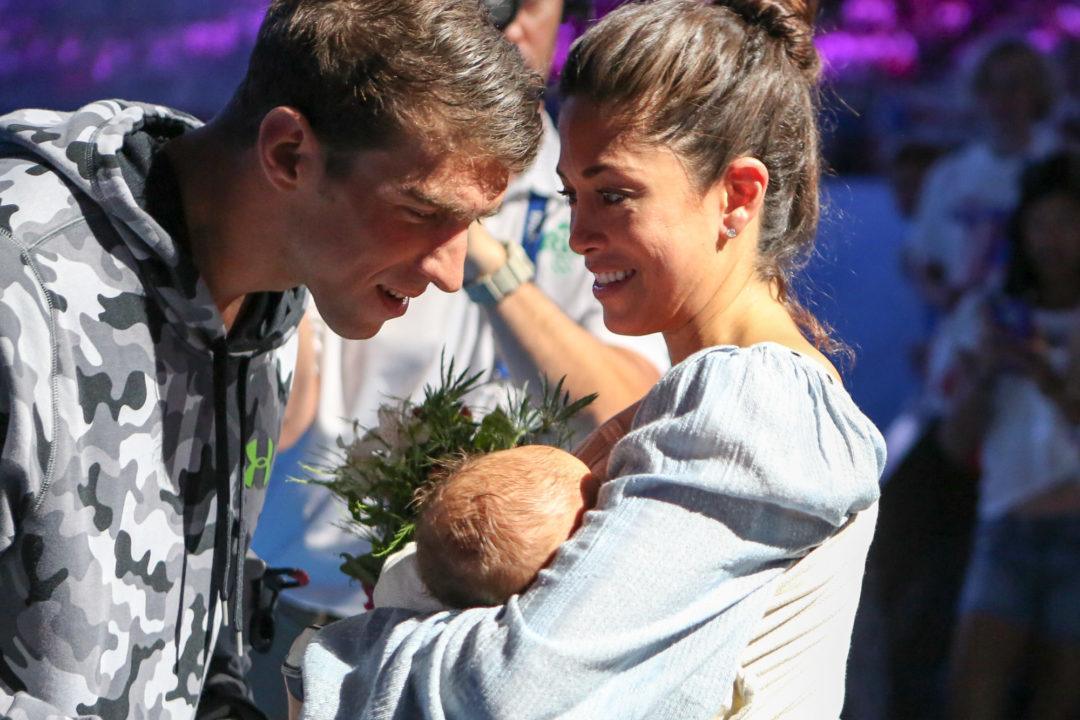 Boomer Phelps won't be an only child for long - Olympic hero Michael Phelps announced today that he and his wife Nicole are expecting a second child. Archive photo via Tim Binning/TheSwimPictures.com

Boomer Phelps won’t be an only child for long – Olympic hero Michael Phelps announced today that he and his wife Nicole are expecting a second child.

The reveal came on Instagram Tuesday morning, with Phelps posting a picture of his wife and 1-year-old son Boomer with the caption “Number 2 on the way!!!! So excited!! Wonder if it’s a boy or a girl??”

Phelps has just wrapped up his first full year of retirement, having last competed at the Rio Olympics in the summer of 2016. That was a few months after the couple’s first child, Boomer, was born. Phelps married Nicole Johnson a month later, in June of 2016.

Phelps insists this retirement is for good, and two young kids might make this retirement stick. Phelps first retired after the 2012 Olympics, but began competing in April of 2014. He’s now been retired about a full year.

Competitive-minded fans might note that this will keep Phelps ahead of longtime rival and teammate Ryan Lochte, who had his own first son in June. If the arms race between the two for medals has now transitioned into a race for children, Phelps is continuing to do what he’s always done best – staying ahead of the field.

Let’s wish the Phelps family the best in the years ahead and see where the talents and interests of Boomer and his sibling(s) take them. At least we know the kids will have height and athleticism in the gene pool. That doesn’t always mean they’ll follow the parents’ sports but that still leaves other possible sports where athleticism and height are advantages – volleyball, basketball, water polo, etc. It’s one thing being the scion of an athlete but there are special challenges of being the scion of a celebrity, super high profile athlete like MP. Many times kids will want to find their own way and niche in the world and not being cast in the role as son or… Read more »

I’m thinking 2 or 3 weeks with two babies might drive him back to the pool? I remember taking my baby and 2yr do for a few days by myself and feeling like a truck had run over me by the time mom got home to save me.

Thanks for the frank admission!

I was home full time with my three now-grown sons, and I STILL don’t know how I did it… even with the able assistance of Mr. B!

Congrats to you and your family, MP!

They should name Child #2 “Sooner” and Michael could win ANY public office in the state of Oklahoma!

Watch both of his kids grow up to hate swimming, and to become track stars instead.

Better hope they get mama’s legs, then, cause ain’t nobody winning a footrace on Phelps’ lil’ stumps.

Pro tip for MP — this is a very good excuse to put on sympathy weight with no guilt whatsoever.