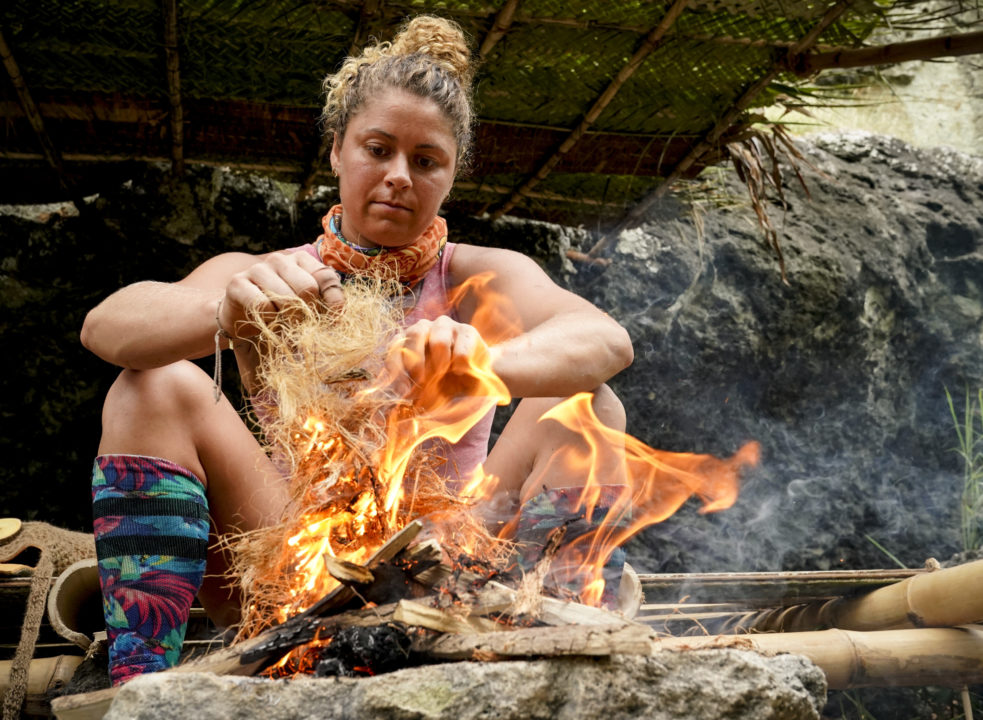 Her two best allies were voted out back-to-back in a twisty double tribal last episode. Elizabeth Beisel now has to regain her footing in the game. Archive photo via Robert Voets/CBS Entertainment

Last week was awful for Beisel. Her top two allies went home in a double tribal council. “Today sucked for me,” Beisel says as she returns to camp. “I feel a little stranded right now.”

The majority alliance is tossing around two names. Karishma has been an outsider most of the game and has taken criticism for laziness around camp. She’s considered the ‘easy’ vote. Beisel is now one of the top physical threats in the game, even more so than she was before. (Alliance-mate Aaron was a gym owner and strong challenge threat, and Missy was a former college basketball player – both got voted out last episode).

Dean is concerned about the weaker physical players ganging up on the physical threats: himself, Beisel and elementary school teacher Tommy. Those three make a pact, but Tommy admits privately that he’s not attached to Beisel after she voted for him at a previous Tribal.

Island of the Idols

By unanimous decision, the tribe sends Lauren to the Island of the Idols. Karishma also wanted to go, but says she didn’t want to make waves with the tribe. Karishma already has a hidden immunity idol, too, so it’s less pressing that she get a shot at an advantage.

Lauren gets some advance information on the upcoming immunity challenge: it’s an endurance-based challenge (aren’t they all at this stage of the game?) that will also give players the option to drop out for food. If Lauren can predict who will win the challenge, she will gain an immunity idol. But if she guesses wrong, she’ll lose her vote. Lauren uses that information to rule out a number of potential winners and ultimately settles on Beisel and Noura, two players who need immunity badly. If either wins, Lauren gains a huge advantage.

Also, two-time winner and Survivor legend Sandra gets attacked by a chicken. It must have been sent by former finalist Russel in his long-awaited act of revenge:

Dean has a fake advantage he was given by an opposing player earlier in the season. He doesn’t know if it’s real or not, but he’s willing to play it regardless. He’s also looking for any strategic opportunity, so he makes a fake copy… of a fake advantage. Now he has two fake advantages. Two times zero is still zero, but if he can convince anyone that what he has is real, it’ll be a nice boost. He gets the famous “dodo” music in the background of his plot, though, which doesn’t bode well.

Detective Dean has a new mystery to unveil and he's getting crafty. #Survivor pic.twitter.com/M0dlT2C0yc

Lauren returns with a plan to talk up food all day to convince other players to sit out the challenge for food, increasing the odds for her two “horses,” Beisel and Noura. Frankly, it sounds like any swim practice anywhere – everyone talking about how great their next meal will be if they can survive that long.

Tomorrow on #Survivor, the castaways have two choices: breakfast or immunity. pic.twitter.com/5eQruCI9Ma

Lauren’s plan works to perfection. Six of the nine players choose to eat – and two of the three actually competing are Lauren’s “horses” in the race. And the only person they have to beat is Karishma, famously terrible at challenges. Karishma drops out almost immediately and Lauren has already won. It’s like an ISL skins race, where the final doesn’t really matter because the game has already been decided.

It does matter to Beisel, though. If she’s going to survive another week, she has to win here. She and Noura hold up for a brutally long time, but the eternally weird Noura seems to go into a full-on trance and is unbeatable, standing motionless for a long time after Beisel has already dropped out.

Things don’t look good. Maybe SwimSwam fandom can switch its allegiance over to lifeguard instructor Janet (a fan favorite so far) if Beisel bites the dust this week.

It looks like the plan is Beisel. Even if it isn’t, the votes will go to Karishma, who has a hidden immunity idol. So Karishma is safe. But the unproven strategic player decides to try to make a big move, telling Beisel about the plan against her and mounting a counteralliance.

Lauren – who is proving to be quite a solid player – sniffs it out and sends her minion Dan over to break up the conversation. That gets some people talking about flipping their votes back to Karishma, which is really Beisel’s only hope.

Dean plays his fake copy of his fake advantage. It’s some fun irony, Dean knows it’s fake, but doesn’t know that the original copy (which he’s saving til later in the game) is also fake.

Karishma plays her idol, and Beisel knows she’s in trouble. Then Lauren feels left out and plays her own idol, which was only good for the next two Tribals.

7 of the 9 votes actually go to Karishma, so Beisel would have been safe had the idol not been played. The remaining two are split between Beisel and Janet. Swimmers under fire tonight. That triggers a re-vote for everyone but Beisel and Janet. The tribe consensus becomes very clear, though, as all seven votes go to Beisel and send her to the jury with her former allies.

That’s going to make some waves (pun intended) for Janet, who now knows she was someone’s preferred boot.

Next week is the family visit, a Survivor staple and one of the best late-game benchmarks. Beisel misses it by one week.

will you continue to cover it, can we be for Janet. She is for sure swammer.

Janet is next to go just because the players left should realize she would get the most votes from the jury. Notice they aren’t in a hurry to get rid of Dan and Karishma.

TAA Did you miss where almost every person voted for Karishma and she played an idol?

Haha yeah I just go straight to the comments section. Let see if they wise up next week

Sad to see Elizabeth go, she has such a great personality that surely would have shined as the field narrows down. Not sure if linking is allowed, but everyone should check out her Ponderosa video, it is great.
Now who to root for that is left? I guess Janet or Noura.

I think she was getting a little tired of the game and was not unhappy to leave. Her personality didn’t really mesh with all the scheming and plotting required in the game of Survivor.

She competed enthusiastically in the challenges and used the mental and physical strength that she developed from her swimming career. I’m still a fan of Elizabeth despite the kerfuffle about the creepy touching by the married older guy.

Would love more articles with an emphasis on Janet. Only 3 more weeks I think. And Janet interview please!!!!