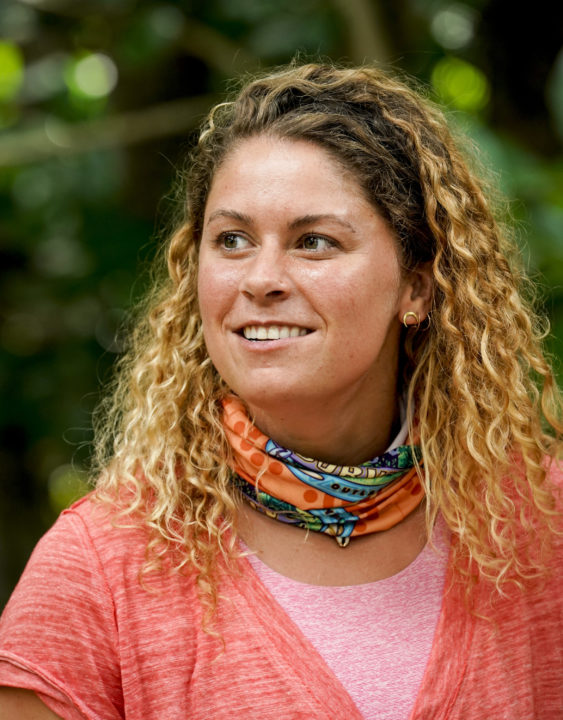 There's a game-changing advantage in play with a 4-4 split between alliances on Beisel's tribe in one of the most dramatic episodes of the season so far. Archive photo via Robert Voets/CBS Entertainment

Opening Segment: The Wrath of the Spider

It’s fun, creepy Halloween segment to open the episode, with Beisel starring as the castaway terrified by a tarantula spider crawling on her as she sleeps. That’s actually horrifying. Beisel seems to escape without getting bitten, but it’s clear she’s about as scared of the spider as most people are of training for the 400 IM.

How would you react if you saw a tarantula on your bed? 😳🕷#Survivor pic.twitter.com/HqSc9P4Xjy

Not pictured: overreaction to a tarantula in my hair 🙃🕷#Survivor #IslandOfTheIdols #Survivor39 pic.twitter.com/SjAFMtxjK0

Beisel’s tribe is in a dangerous 4-4 split between original orange members and original purple members. Survivor rules try to entice players to avoid ties at all costs – if the votes are a tie, there’s an immediate re-vote. If the vote remains tied and the tribe can’t come to a consensus, then all players except those who received votes will draw rocks – whoever gets the white rock is automatically eliminated. It’s a terrible way to lose the game, and it’s clear right away that many of Beisel’s tribemates are willing to betray their tribe to avoid a rock draw.

Gym owner Aaron is the main driver – he immediately makes an offer to the other alliance to sell out his teammates – specifically factory worker Elaine. That’d save Beisel for a week, but would also put her in minority as a big physical threat.

Purple team chooses to sit Elaine out of the challenge. And in a twist, she is instantly sent to the Island of the Idols, which will give her a chance at a much-needed advantage in the game.

Beisel’s tribe has a pretty significant physical advantage, especially with Elaine sitting out, and they win a huge reward: chickens to be used for food or for eggs.

Island of the Idols

Beisel’s week 1 error is looking more and more forgivable, as pretty much everyone else has impulsively jumped into a gamble for an advantage too. Elaine takes the deal before she even knows what she’s playing for, and risking her vote could seriously threaten Beisel’s standing in the 4-4 split. Elaine has to find an advantage during the next challenge – in plain sight of her whole tribe – or lose her vote. That’s tough, though it’s been done several times before in Survivor.

The next segment with the orange tribe starts out about as uncomfortable as can be, then takes a hard right turn into something pretty beautiful. Grad student Jack makes an offhand comment about durags to admissions counselor Jamal, one of just two African-Americans on this season’s cast.

This isn’t unprecedented in Survivor. There have been some pretty ugly race-related interactions in the past, and some pretty serious rifts between players. But Jack is immediately regretful and embarrassed of his comment, and seeks out Jamal to apologize – and not just to apologize, but to learn why his comment hurt Jamal the way it is.

Doing a weekly Survivor recap brings out a lot of the same comments: “How is that show still on?” “Who watches this?” “Why should I care?” This week’s episode is a great example of why Survivor has stayed relevant for almost 20 years. It’s a true social experiment, and an opportunity to see people from completely backgrounds, viewpoints and walks of life interacting. Sometimes it leads to conflict, and helps show how not to behave. But every now and then, it leads to a really inspirational example of how we can navigate differences that are especially painful or uncomfortable. Jack and Jamal communicating their own thoughts and histories is as good an example as you’ll see of healthy conflict.

(Rant over. Hey, maybe we can apply this to the comment section’s recruiting-based ACC flame war?)

An Island of the Idols Alliance

For maybe the first time this season, we get to see two tribe members share the secret of the Island of the Idols. Beisel went there in episode 1, and her alliance-mate Elaine just got back. The two compare notes, and Beisel has a very gif-able reaction when Elaine shares her shot at an advantage:

RT if this is you right now! 🤭 #Survivor pic.twitter.com/gut6aDySEi

There are some wrinkles, mostly involving Elaine‘s inability to slip the idol into her pocket, but the two do pull off the move, and Elaine both keeps her crucial vote and gains an advantage in the game – the ability to block the vote of one tribemate at Tribal Council.

Elaine and Beisel are both in on the twist, and they decide to share the news of their advantage with their two alliance-mates, Aaron and Missy. Missy is 100% in – she’s been a strong Beisel ally since day 1 – but Aaron still secretly plans to sell out his tribe-mates to the opposing alliance, which would effectively make Elaine’s block-a-vote useless.

The sort-of majority get a decidedly villainous look in the episode narrative, condescending about Elaine’s ability to pull a move and comparing the minority to chickens awaiting slaughter. Elaine is clearly in the underdog hero role at this point, but Beisel also gets a good opportunity to explain her own strategy – that’s usually a good sign for longevity. She mentions nanny Lauren as a threat and potential target.

At Tribal Council, Elaine announces her advantage, and chooses to block the vote of personal injury lawyer Jason, a pretty strategic player who was clearly loyal to the majority bloc. That sets off a round of whispered scrambling – it appears things will probably come down to Aaron’s decision to flip or not to flip.

Inexplicably, Aaron sticks with his original tribe, which seems very surprising given his earlier eagerness to flip. Beisel now sits in a 4-3 majority within her tribe, though her original tribe is still down 5-2 in the other tribe and 6-8 overall.

On the other hand, there are clearly fractures in that 5-2 opposing tribe, as majority member Noura appears antsy to knock out some of the powerplayers in her own alliance. At this point, a merge is probably coming after the next 1-3 boots, and a player like Beisel could be in prime position to go on an immunity run.

Best episode of the season. And Elizabeth is in a way better spot compared to the last episode

She’s rapidly learning how to play the game.
1. It was a brilliant move for her to corner Elaine and tell her to fess up about IOI.
2. Agreeing to help cover for her to help her get the advantage solidified her bond with Elaine, and no one knows she did it.
3. Telling Elaine to tell everyone about it individually once she got it also kept the heat off of her.
4. Everyone assumed she was with Elaine, so she would be a non-factor at the vote, unlike Missy and Aaron, who just put massive targets on their backs for playing the OG Vokais. Tommy and Lauren especially didn’t take it well.

I still can’t believe that Elizabeth’s team lost to the NY Breakers and had to go to Tribal Council. Ugh. But definitely was fun to watch Aaron flip flop a bit after he was super thrilled and beyond excited to announce his verbal commitment to vote with Elaine et al. in 2021 (flourish athletically and academically, yadda yadda etc.). The purist in me still cringes at these new twists though; if production wanted to offer a different (and less powerful) advantage, depending on who was chosen to “sit out”, they could. I’m not saying that’s what happens, but still. Anyhow, I think the upcoming skins race in the next episode should be a good one; l wonder who they will… Read more »