Elizabeth Beisel on Survivor, Episode 5: Detective Dean is On the Case 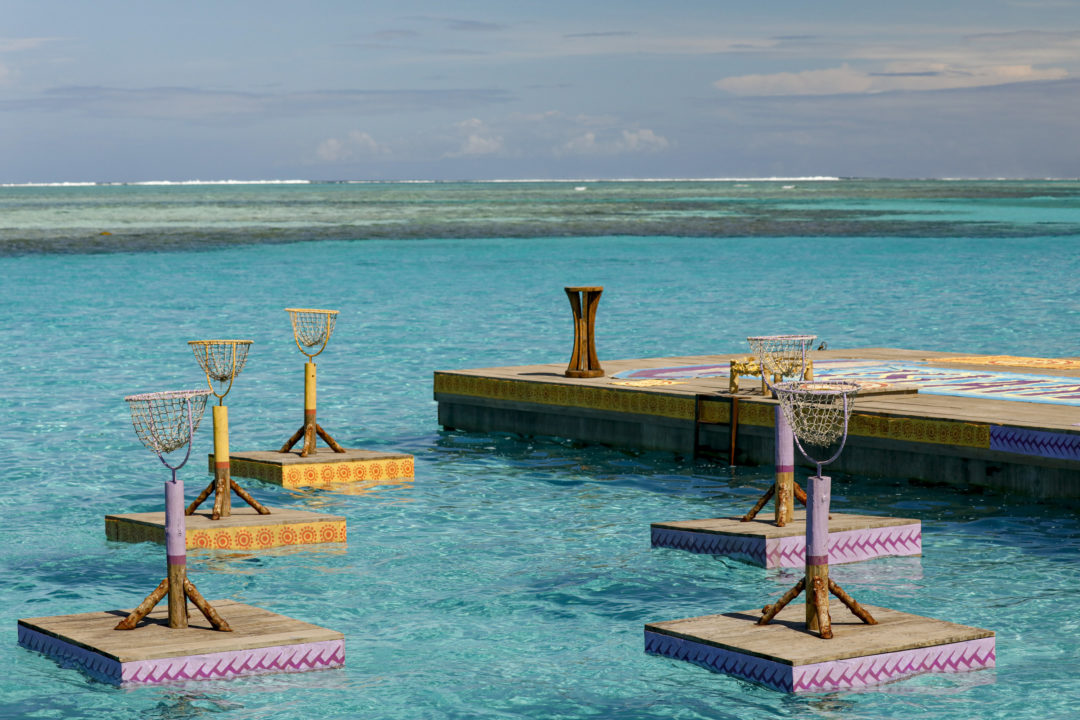 Detective Dean wants to know who burned him last week - and Elizabeth Beisel is one of his prime suspects. We recap Beisel's island adventure for week 5. Current photo via Robert Voets/CBS Entertainment

When you and your friends realize it’s Wednesday and @survivorcbs is on!!!!! #survivor 🌴😁 pic.twitter.com/drAE0ZU68O

Dean feels as spurned as a college coach after a late de-commitment. He’s on the warpath to see who started the campaign to boot his girlfriend/alliance mate Chelsea last week. (Hint: it was Missy). He suspects everyone, though, including Beisel, whose lie about not knowing where the plan originated is not believable. Luckily, the rest of the tribe are equally bad liars, so she doesn’t look that suspicious.

It’s a milestone of almost every Survivor season: the tribe-swap. Players randomly draw purple or orange buffs as the entire structure of the game is shaken up.

Drop your buffs! Castaways are forced to switch up their game after a surprising tribe swap on Wednesday's all-new #Survivor. pic.twitter.com/nUfs9FxhaG

It could have gone a lot worse for Beisel. Her new purple tribe is split 4-4 between former orange members (Beisel, Missy, Aaron and Elaine) and former purple. She also gets split from both Dean and Karishma, who clearly felt on the outs and were willing the flip. The one to watch is Aaron, who was blindsided in the very first vote and could still harbor some resentment.

Their tribe also looks like the physically stronger bunch – though in Survivor, the challenges ultimately come down to puzzles 90% of the time.

In a completely seamless transition into an almost unnoticeable product placement, host Jeff Probst announces the tribes will be competing for an Applebees feast of Applebees menu items in authentic Applebees fashion, complete with tribal confessionals about how much they love Applebees. (Did you know Applebees has a drink called a Shark Bowl?). Applebees.

The challenge is wriggling through the sand with your hands and feet tied. Beisel’s tribe crushes, maybe in part because I think that activity was actually part of the Ryan Lochte Strongman Workout craze.

The tribes turned their game up to the max for these sizzlin' mouth-watering fajitas! Pres by @Applebees pic.twitter.com/9MCqioy4Kc

The new purple tribe gets a reward feast, where they trip all over each other trying to name-drop Applebees for increased airtime. Meanwhile at orange camp, Karishma is tripping over herself trying to flip alliances as early as possible. Old purple members already have a 5-3 majority there, so her flipping isn’t really that impactful.

Elaine and Missy are wrestling like a couple of age group swimmers getting their taper energy and stressing out their coaches. Meanwhile Aaron is building a relationship with the other alliance: he connects with elementary school teacher Tommy, with both effectively promising to betray their alliances to keep each other in the game long-term.

Aaron quickly brings Missy into the plan, and both agree that the alliances of the original orange tribe are dead. Guess who was in that alliance? Yeah, Beisel. Not good at all.

It’s another water challenge. Score for Beisel, who really needs to win but probably doesn’t know how bad she needs to win. She continues to crush the water portions with so much intensity you have to wonder when the other players will start to feel threatened by her challenge prowess.

Orange closes with the hoop-shooting aspect of the challenge, but purple holds them off, and Beisel stays safe for another week.

Beisel’s former allies are throwing each other to the wolves. Former NHL player Tom and former college basketball player Dean are selling out Karishma, who has been a challenge liability. Meanwhile the lawyer Karishma is trying to embed into the majority to knock out one of the more physical threats.

Dean makes a nice move towards the end, suggesting that Karishma would flip back to Missy & co. at a merge, but the majority doesn’t buy it and Tom goes home. Tom was a strong ally for Beisel, and the days look numbered for Dean, another Beisel ally. She’s going to need to forge a good relationship or two with someone on the former purple tribe if she has any hope of going deep in this game.

Two very Beisel-relevant pieces of the teaser for next week: first, they edit a gross shot of a creepy spider, followed by Beisel frantically trying to brush something out of her hair. Not cool, editors. Then they highlight some maneuverings on the new purple tribe: a stalemate 4-4 tie that would lead to drawing rocks to see who goes home. The roulette option is meant to encourage players to find alternate solutions, and going to rocks has been extremely rare over Survivor‘s 39 seasons. One alternate solution is already presented: Aaron offers to vote out one of his allies (say… Beisel) to avoid rocks. Beisel’s standing has taken a sharp downturn the past two weeks, and we might not have many weeks left of this recap.

not a good swap for Elizabeth with Aaron looking like he’s going to go rogue. Hopefully this tribe can just keep winning immunities until the merge.

I like the way Elizabeth has been playing but it’s a bummer that her tribe has been so bad. It looks like her only ally is Elaine

My favorite character on this episode was Applebees, who seemed to get more airtime than everybody in the game except for Dean. And of course his name is Dean. When is the 400 IM immunity challenge happening? It might be more exciting to watch everyone but Elizabeth get a DQ, rather than “OK everyone, when I say go, swim out (and/or drown) and retrieve your puzzle pieces.”

Elizabeth is getting a post-merge edit. She’s too much of a challenge asset to let go. Tommy is getting a winner’s edit to me. I don’t think Aaron will last much longer when people find out how much he’s scheming behind the scenes. The move Dean made to put the heat back on Karishma was a stroke of genius.