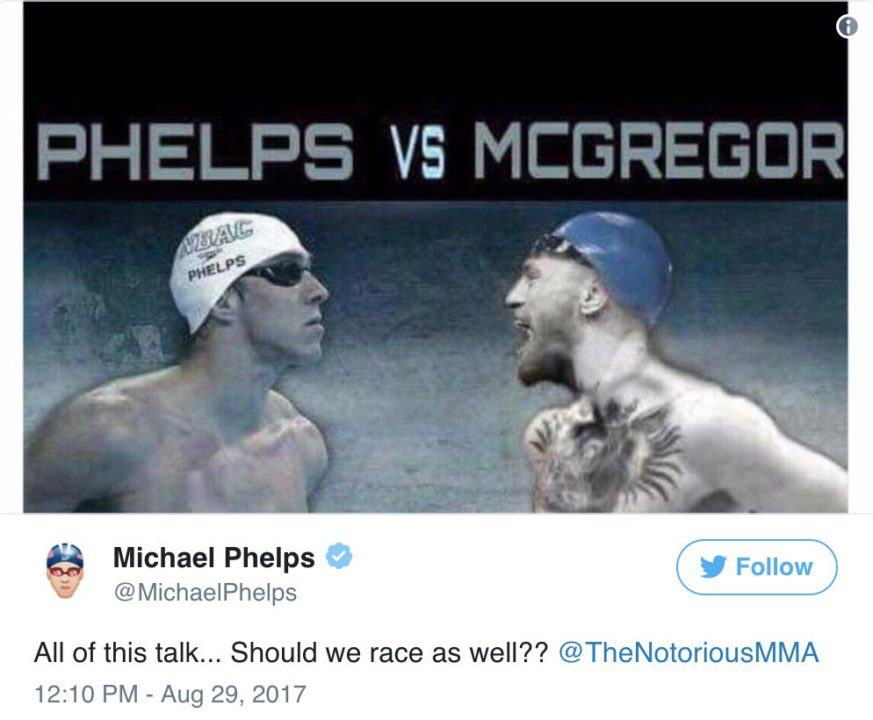 In one of those “is it April Fools Day?” moments, Michael Phelps tweeted earlier today, playfully (or not?) suggesting that he and... Current photo via Michael Phelps

In one of those “is it April Fools Day?” moments, Michael Phelps tweeted earlier today, playfully (or not?) suggesting that he and UFC Lightweight Champion Conor McGregor take it to the pool and race. Phelps didn’t actually mention a pool, or water of any kind, though he did photoshop a cap and goggles onto a photo of McGregor.

Both Phelps and McGregor have been in primetime this summer, with Phelps having raced a (hologram) shark and losing (sad) during Shark Week and McGregor taking on boxer Floyd Mayweather in a professional boxing match and losing (expected).

Not surprisingly, Phelps’s taunting set Twitter ablaze, and the tweet itself has accrued more than 25,000 RT’s and 60,000 favorites as of this post’s publication (11:40pm central time).

This wasn’t the only story that has put Phelps in headlines, as he and his wife Nicole Johnson today announced that Johnson is pregnant with baby number 2.

All of this talk… Should we race as well?? @TheNotoriousMMA pic.twitter.com/l3JoMgb1qT

Phelps has already raced a celebrity before, as he and former NBA player Shaquille O’Neal had a televised race on O’Neal’s show “Shaq Vs” in 2009. Phelps actually taunted O’Neal about racing him again earlier this month:

@SHAQ I hear you want to race again??? Any truth to this? Def not coming outta retirement but I'll def give you a chance to "try" to win?

Don’t go screaming “Phelps 2020!” though, as he has another child on the way and there’s no indication that he’s ever returning to the sport of swimming competitively again, but we could see him racing some public figures in the future. After all, he has something to prove after losing to a (hologram) shark.

I would rather see Phelps try to fight McGregor. Did not care at all about May/Pac or Mayweather/McGregor, but I might actually pay to see someone fight Phelps.

On that note, I’m tired of watching people compete at things they’re good at. Give me a show where every episode is them taking athletes way out of their comfort zone. Swimmers fighting, powerlifters figure skating, curlers playing full-contact football, etc. Have a big ol’ wheel that decides the sport, make a whole thing of it, it’ll be great.

This comment reminds me of an episode of “The Big Bang Theory” where Sheldon Cooper and Barry Kripke have to duke it out and they decide to do something that they are both bad at, namely, sports (specifically, basketball).

There used to be a show like this. It was one of my favorites as a kid – though it was all filmed in the 70s and I only saw it re-aired on ESPN Classic. I’ve often fantasized about reviving it, then I remember how much the business of sport has changed, and nobody would participate – not worth the financial risk.

Wouldn’t you put this in the same class as a celebrity golf tournament or basketball game? It’s not like this would be an unprecedented event. When he raced Shaq did it cause harm to swimming?

Good for swimming for public to see bad swimmers. Shows how hard it really is

I anoint this the official “SwimSwam Comment of the Day.” I have the authority to do so, and so I have done it.

MP — how ’bout a donation to the those displaced in the Houston swimming community? Contact SwimSwam.

How do you know he hasn’t donated already?

You’re right. It was in the same batch with DJTs.

What business is it of yours if he donates? How about you go to Houston and help out with the relief efforts?

I remember one of those 1980s African disasters & Americans donated high heels . Now Flotus is criticised for wearing high heels (across the WH lawn ) Outrage ! At this very moment Housewives of Houston are scouring the charity bins for those stilletos .

Just because you are a flood victim does not mean you lose your shoe aspirations .

Whatever you do, don’t contact the Clinton Foundation. That didn’t go so well with Haiti.

Move on from the gimmicks. Start coaching.

Lol. I love Phelps and always have but he would make a terrible coach

What else is he going to do then?

Blow money and bang his model wife while reflecting on the fact that he’s the greatest swimmer of all time? Sounds like an awesome life to me.

Until he ends up as a greeter at some club when he’s 60. Love the foresight, the contributions, and the giving back. SMH.

He’ll be fine. His marketability will live on as long as he holds the records for most golds in an Olympic games and overall. I can tell you that coaching salary isn’t going to prevent him from being a greeter.

Agreed. Athletes with that level of natural talent in their sport rarely get anywhere near the same level of coaching ability. They tend to have trouble relating things to kids for whom it isn’t just going to click. Sergio is a notable exception. Pablo is doing okay, but Nebraska isn’t exactly a power player.

Phelps does seem like a pretty analytical guy with decent communication skills, so maybe he’s able to break down techniques and movements well for swimmers, but there’s also a good chance that he gets frustrated because swimmers don’t get things that seem very intuitive to him.

I’m not talking about former top swimmers who just make a living coaching. That’s a list of swimmers who have coached, yes, but how many of them have made serious contributions to the field of coaching that are anywhere near their accomplishments in swimming? The easy targets from your list would be Peirsol and Hansen, as I’m sure they’re good coaches but I think it’s too early to really tell what impact they’ve made. I didn’t realize Mike Bottom qualified for the 1980 Olympics, that’s very cool and I’ll admit he’s definitely one of the greats. Rick Demont too. I’m glad to hear that Tom Jager has a head coaching gig, but being a coach at a school that got… Read more »

Lol, once he races, he’ll come out of retirement

Nah, not swimming again. Take him on in the Octagon, Phelps.

How about a MMA fight in a caged pool the size and shape of a UFC octagon?