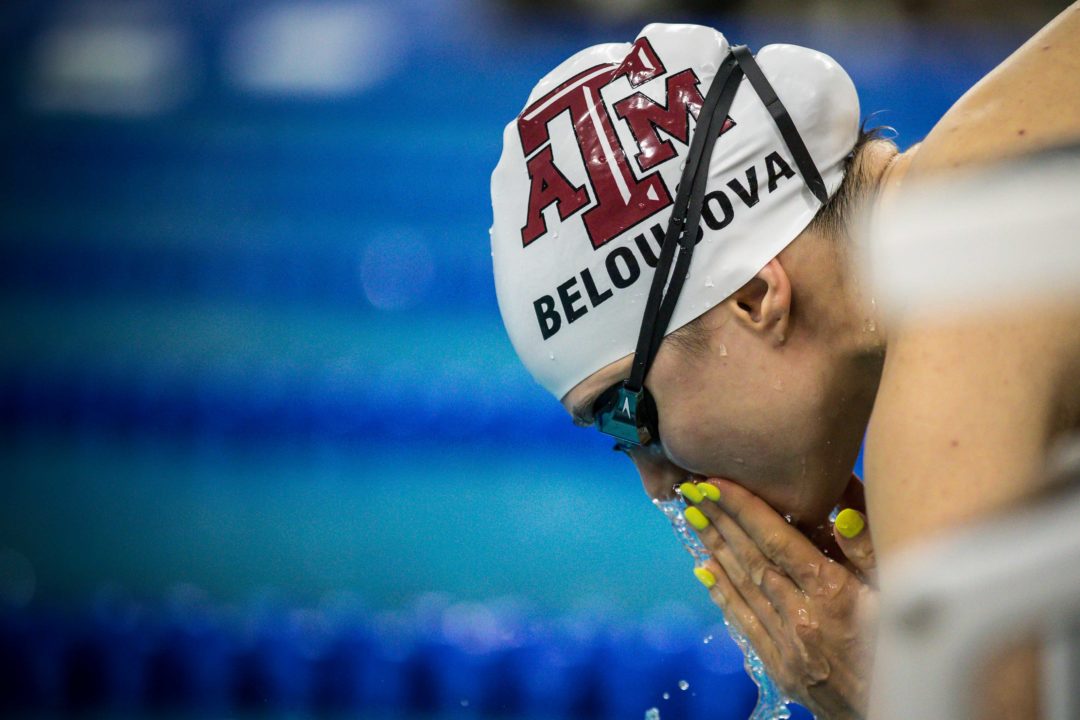 Reigning SEC breaststroke champion Anna Belousova was one of the top performers for the Aggies. Belousova swept the breaststroke events. Archive photo via Jack Spitser/Spitser Photography

Texas A&M closed out their dual meet season with a win over Arkansas. Reigning SEC breaststroke champion Anna Belousova was one of the top performers for the Aggies. Belousova swept the breaststroke events with a 1:01.88 in the 100 and a 2:12.98 in the 200.

The Aggies won the first six events of the day, claiming at least the top three spots in four events before the diving break. After a commanding victory by the 200 medley relay team of Raena Eldridge, Belousova, Carlton and Golf Sapianchai to start the day, Joy Field dominated the 1650 free (16:43.83), touching the wall 15 seconds ahead of the second-place finisher.

Raena Eldridge added points for the Aggies with a second-place finish in the 50 free (22.79) just before the diving break.

Charlye Campbell earned second in the 3-meter with a score of 323.78 as A&M claimed the 2-6 spots in the first of the diving events. Alyssa Clairmont took second on the 1-meter board with a score of 280.65.

The Aggies will return to the pool when they travel to Auburn for SEC Championships, Feb. 18-22. Follow on Twitter for updates @aggieswimdive.

Post Meet Quotes
Head Coach Steve Bultman
On the team’s performance …
I’m very pleased that the girls swam well. We have some people that are definitely looking better, making improvements and moving in the right direction with SEC’s coming up in a little over three weeks.

On looking forward to SEC Championships …
We have a few that have already qualified for NCAA’s, so they won’t be resting hardly at all. But the majority of the girls will be rested and shaved, and we need to have them step up and swim fast to get their NCAA qualifying times.

Head Diving Coach Jay Lerew
On the team’s performance …
I wish we could have done a little better. We were a little flat today, but that’s to be expected. We started running stairs again and started doing a high-conditioning program for a week, then we are going to let off for a couple weeks, so they are a little fatigued today. They did alright, but I’d like to see them do a little better.

On preparing for SEC Championships …
Hopefully they are fresh and the details are there. The girls have their dives down, they’ve been doing them a while, but they just need to clean them up and get them in the water better.

Senior Swimmer Katie Portz
On Senior Day …
Today was great, the times were great, but most importantly it was Senior Day and I got to celebrate with my class. We had a bunch of great swims and I’m just happy to be here with them and to have made it through these four years.

Sprinter Anna Hopkin ended the meet with three first-place finishes and a NCAA ‘B’ cut. The first victory for Hopkin was in the 50 free (22.42). Her second showing was in the 100 free, touching the wall at 49.01 to earn herself a NCAA ‘B’ cut time. Hopkin closed out the meet with teammates Emma Hultquist, Kobie Melton and Molly Moore taking the 400 free relay by over three seconds.

“We came here to compete against the four-time defending SEC Champions and won six events. It was always going to be a challenge especially a second day on the road. We displayed pride, confidence and a belief in our hard work. Esti, Peyton and Anna led the way with five of our six wins, and we finished the meet with a relay win in a great time. Our team is right where we need to be, tired yet dedicated and patient to focus on preparing for SECs and NCAAs.”

“Esti had an exceptional day on both boards. I am extremely excited about her progress. For Esti to be on the road and not have been in the Texas A&M facility prior to warming up today along with winning both events say a lot about her maturity as an athlete.”

The Razorbacks will be back in the pool Feb. 1 to face Kansas for their last dual meet of the 2019-20 season.