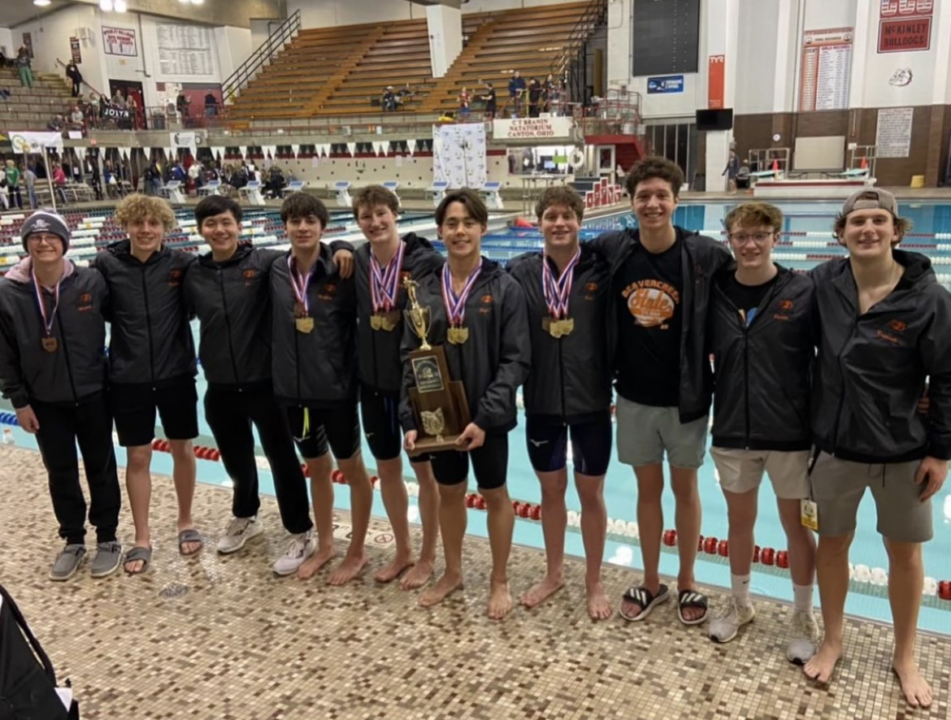 The New Albany girls defended their state title winning with a total of 247 points. On the boy’s side, Beavercreek won with a total of 211.5 points just ahead of Cincinnati St. Xavier who scored 207.5 points. St. Xavier had won every state championship since 2008, but the 13-year streak has now ended.

Leading the way for runner-ups St. X was Thackston McMullan who won the 500 freestyle in commanding fashion winning the event in a time of 4:26.58. McMullan won the event by over four and a half seconds.

Carl Bloebaum won the 100 butterfly in a personal best of 45.68. His previous best was a 46.06 from Winter Juniors in December 2021. That time also set a new meet, state, and pool record. He is committed to Virginia Tech for fall 2022.

NC State commit Hudson Williams went a best time in his 50 freestyle to earn the win touching the wall with a time of 20.09. He will arrive at NC State in fall 2023.

Jonny Marshall of Firestone won the 100 backstroke in a time of 46.74. Marshall is committed to Florida for fall 2023.

New Albany also secured their victory by winning the 400 freestyle relay. The team of Meeting, Ashlyn Morr, Marisa Downs, and Ava Lachey won in a time of 3:23.86.

Also highlighting the girls side of the meet was Olentangy Braves Martina Peroni. Peroni won both the 200 IM in a time of 1:58.04 and the 100 butterfly in a time of 52.96. Her 100 butterfly time was a meet and state record Peroni is committed to arriving at Duke this upcoming fall.

Gahanna Lincoln won the 200 medley relay as the team of Marie Belli, Sami Kiss, Kendall Hitler, and Aubrey Briseno won in a time of 1:43.47.

Phoebe Wright of Walnut Hills won the 100 freestyle in a time of 50.10. That was slightly faster than her previous personal best of 50.29 which she set last week at regionals. Wright is committed to George Washington arriving on campus this fall.

The Upper Arlington relay of Caroline Porterfield, Hayden Hollingsworth, Avery Catalano, and Riley Huddleston won the 200 freestyle relay in a time of 1:32.61. Huddleston anchored in a 22.72 to help secure the win.

Hurray for a Public School! Beavercreek did a great job, but St X wasnt their usual dominant deep team.

High School sports Public vs Private system is broken in all sports in Ohio and many US states. I’ve just accepted or expected St X would win, but nice to see a public school win. In Ohio, private schools represent 20% of students, but account for 80% of state champions across all contested sports.
Sure, swimming seems like an individual sport, and St X dominance didnt bother me for a long time. However, I am still close to my fellow relay teammates 30 years after I competed at the Ohio State HS meet. These accomplishments and relationships are real… Read more »

I swam in Ohio in the 90s when there was one state championship and 24 qualifiers across the entire state in each event (I think). And I hear your point. But then what are you actually asking for? You’d like a one division where the faster schools can compete and another division where slower schools can compete? For what, so they can have a medal and say they “won”? I kind of feel the opposite, and I wonder if creating these divisions just makes a Greater Than and Lesser Than division. I’m currently in NJ where they very literally have 31 conferences and state champions in football. And while it’s neat to have fun and win a State Championship, I… Read more »

Hey swimswam, where is the D2 article for Ohio?

I think some people must just think that we hit a button and the articles generate. That’s not how it works. We’re real people who have a lot of swimming to cover, and we’re doing that as fast as we can. We’re doing our best to cover it all, and I apologize that we’re not working hard enough for your liking, but I promise you that it is on our list to cover.

It would be interesting to see an All Ohio list. There were some swims in D2 that would really have been fun to watch in a head to head vs D1, notably the 500 free and 200 IM. I realize that Ohio has a lot of programs and D1 is usually the dominate force, but there are some really great swims coming from D2 there every year. Who knows how they could have pushed each other had they swum head to head…

That program just hasn’t been the same since the graduation of Bomber legend Gordon Wheeler!

Cheering was for all 4 relay teams and was great

Like Carmel in Indiana this is an upper middle class area where a chip factory is going up in 3 years. Yup, not all the Midwest is a rustbelt.

There’s a big difference between Beavercreek and Carmel. Unlike Carmel, Beavercreek HS doesn’t have their own pool and the swimmers train with the Dayton Raiders. Although St. Xavier is down on talent, this is a historic and tremendous accomplishment for Beavercreek.

The st x talent is young. Wait till next year!

A couple other notes:
-This is the first time a public school has won Boys D1 states since Upper Arlington did in 1987
-The boys 100 fly record was actually broken twice this past weekend. Scotty Buff, who won the event and set a state record last year, broke his own record of 46.59 with a 46.17 in prelims. He would beat this time again with a 45.90 in finals although Carl Bloebaum finished ahead of him.

How tough is Ohio HS swimming? #4 ranked recruit Scotty Buff gets 2 second places. He also placed second to a fellow UF recruit in 100 Back. Some fast swimming going on in OH.

Also, way to go public HS Beavercreek for the victory! So difficult to beat the private schools, even the Foster boys couldn’t knock off St Xavier.

And congrats to the Hawken School girl’s D2 team as well as Hunting Valley University School boy’s team in winning the D2 states!