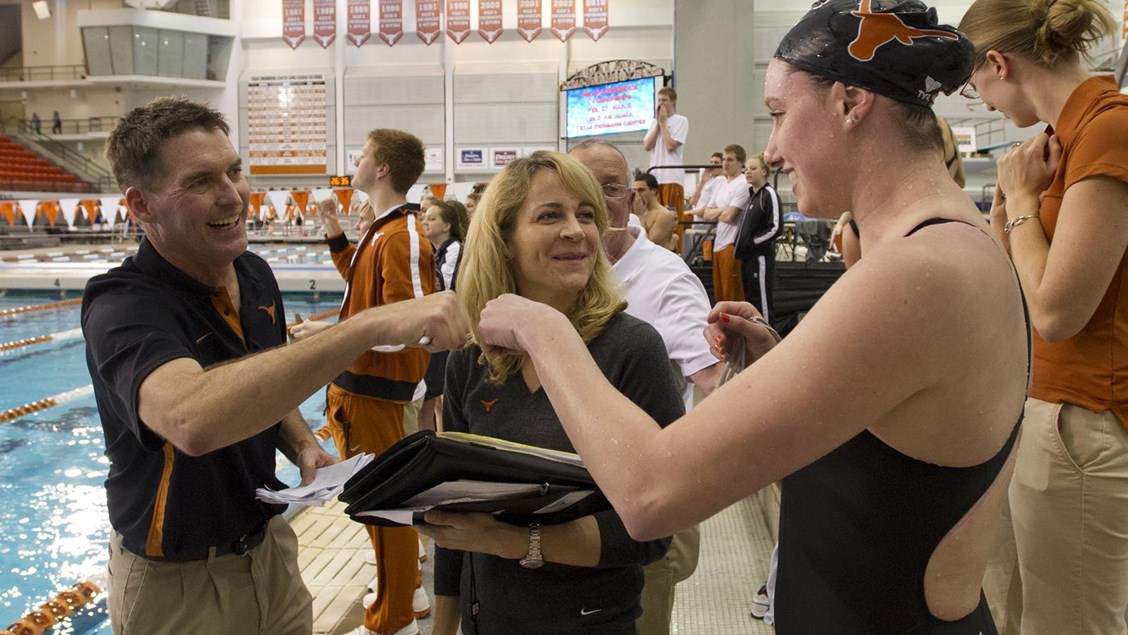 Fink (left) has spent the last 8 seasons on the staff of the women's swimming & diving team at the University of Texas, most recently as associate head coach. Archive photo via Texas Athletics

The Austin Swim Club in Austin, Texas has announced Roric Fink as the program’s new head coach. Fink comes to the program from the nearby University of Texas, where he was on deck for 8 seasons.

He will officially begin his tenure on August 15, and he replaces former head senior coach Chris Coghill.

In addition to head coaching duties, he will lead the team’s top Senior 1 group.

Fink has also coached the Tempe Sun Devils Aquatic Club and with the powerhouse Tucson Ford club in prior USA Swimming experience.

Fink had been Capitani’s top assistant every year since she took the Texas job in 2012. In 2019, the Longhorns had their best NCAA finish of the Capitani/Fink era, placing 5th nationally. The team had six top-10 finishes under that staff in seven NCAA Championships.

In 2020, Texas had 5 female swimmers qualify for the NCAA Division I Swimming & Diving Championships, which was the lowest count of the Carol Capitani era (which previously was 8 qualifiers in 2015).

The club was led by 6-time Olympic medalist Brendan Hansen, who resigned in 2018 after 4 years with the club. Among the program’s most noteworthy alumni are US World Junior Championship team member Matthew Willenbring and 2017 U.S. World Championships team member Dakota Luther.

Also Announced as new members of the coaching staff:

What a great hire for ASC!! He will continue to develop an already strong program.

Lots of downvotes. Didn’t mean to strike a nerve. Really don’t know anything about situation and was just curious.

He left on very good terms with the club and wanted a life change in Washington.

What’s Brendan Hansen been up to in the last couple years? I remember he made a huge impact at ASC when he was coach

Way to go Roric! Good Luck Man and see you on deck.

WE MISS YOU TONY

Love me some Roric! Glad to see him staying in Austin! One of the best in the biz! This guy is the real deal!

So happy for you Roric!! These kids are lucky to have such an incredible coach!!!