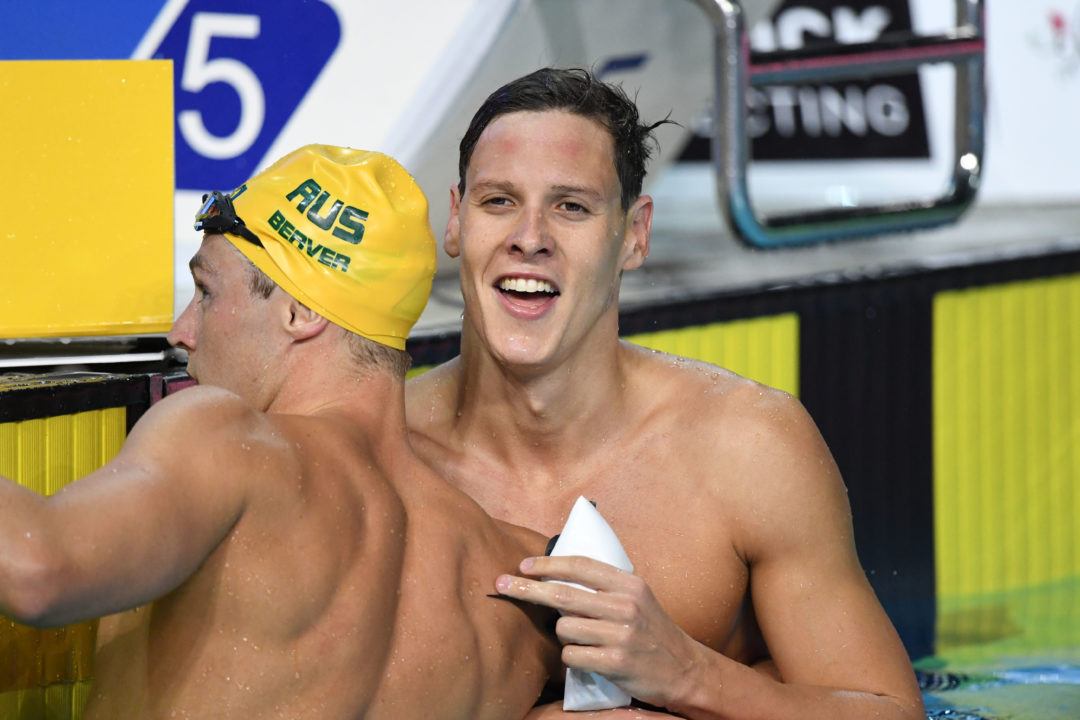 The dominating performances by Australia at the 2018 Commonwealth Games may lend insight into how effective the nation's new Trials timing schedule is, but the positive results could also be attributed to a home Games. Archive photo via Swimming Australia, Ltd.

The Australians completely dominated the 2018 Commonwealth Games swimming medal table, racing away with a monster 73 total medals, with 28 of them gold. The next nearest nation was England, who achieved a mark of 24 swimming medals overall, with 9 golds to its name. With the Games having concluded on  April 10th, the Swimming Australia brain trust is analyzing these and other results to help determine whether or not its new Trials timing structure can indeed be called a success.

Preparing for the 2018 Gold Coast-hosted Games, Swimming Australia tried something new in a bid to combat the relatively disappointing overall outing at the 2016 Olympic Games. In past selection competitions, the racing took place more in the ballpark of a 3 1/2 month range prior to the actual elite event. However, these Commonwealth Trials were held just a mere 5 weeks out from the actual Games, with Australian trying out the American timeline model.

According to The Australian, Head Coach Jacco Verhaeren cited that 65% of his swimmers under this format improved on their times from Commonwealth Trials to the Games, near double the ballpark of 30% who accomplished the benchmark between Olympic Trials and Rio.

“I think it’s too early to draw conclusions but we’re hitting about 60, close to 65 per cent in terms of personal best times or season’s best times and that’s a very good score, that’s double Rio, so the indications are good,’’ Verhaeren said. “But we selected people from a little bit lower standards here so we have to see in the next three years but the first signs are very good.’’ (The Australian)

Cautiously optimistic on calling the experiment an absolute success, Verhaeren identifies a positive that the swimmers themselves have at least proven the new scheduled is doable.

“What it definitely proves is that it’s no problem to move trials to five weeks out,’’ he said.

“We definitely need to test it again during Pan Pacs and world championships and obviously the acid test is the Olympics.’’

The Dolphins historically produce their best efforts on their home soil, going back to the Sydney Olympic Games through the more recent performances by both Cate Campbell and Cameron McEvoy.

Pre-Rio, Campbell notched a then-world record-setting time in the 100m freestyle at a Grand Prix meet in Australia, while McEvoy clocked the fastest 100m free ever in textile also pre-Rio. When both were unable to reach the podium come game time in Rio, Verhaeren chalked up some of the disappointment to overall nerves and stage fright.

As such, the upcoming Pan Pacific Trials slated for early July will serve as perhaps a more unbiased test of the new Trials timing, as the actual benchmark meet, in this case, the Pan Pacific Championships, takes place on foreign soil in Tokyo. We’ll be able to see once again how swimmers times improve (or not) in an approximate 5-week time span.

The Pan Pac trials are 7 weeks out from the Pan Pac meet , why Jacko?

I think having trials 5 weeks out could be very successful in the long term for Australia. The problem is that they’re inexperienced at it and the first time they have suboptimal results with it the pressure will grow to jettison it. I don’t think they necessarily needed the change as Australian teams a decade ago and beyond were quite successful with the traditional timing. That said there are certain advantages with it and the US has managed to overcome the challenges…(eg the difficulty for high volume distance swimmers and most qualifying athletes having to peak twice).

At last the death of the 15 week repeatable cycle.

I think what we have to be careful about is wheee to draw the line between blaming the head coach and blaming the athlete on their own performance… back in 2012 Australia had an Aussie head coach and only won one hold medal … so is that Jacco’s fault as well?

I think stars like Cameron McEvoy and cate Campbell need to be accountable for their own performance when the big dance comes along .. do they train to train or do they train to swim fast at the big meets??? And training involves both physical and mental approach mind you…

Why wouldn’t they be? Who the big guns are might change, but they’ve never shirked the Olympics, just sometimes under performed when they’re there.

The switch to the new format was justified given the history of underpeformance at the big meets but the jury is still out. A 65% improvement rate looks good and is typically what the USA achieves. However, with the Commonwealth Games being a lesser meet and with the top three qualifying, many of the swimmers took the risk of not doing a full taper. Therefore, a meaningful improvement rate was to be expected. Also, this was in Australia’s back yard. A better test will come next year when trilas for the World championships are held.

I’m an Aussie swim coach but I’m afraid i don’t share Jacco optimism. At the trials on about 8 athletes nade made the qualifying times. Lets face it its the Commonwealth games, not really a tough meet, sure some races were close but compared to World records the athletes were still a bit off. I’m hoping at the next Olympic trials before Tokyo that things will be better and records more make the QTs.
I’m not sold on Jacco as head coach and feel he got lucky with the results

Aussie Swim Coach is spot on…The Aussies will fall flat being led by a guy named Jacco. Sounds like Jacco the Monkey!! LOL! Many of the Aussies fold under pressure I believe due to the fact that it is a big prisoner colony.