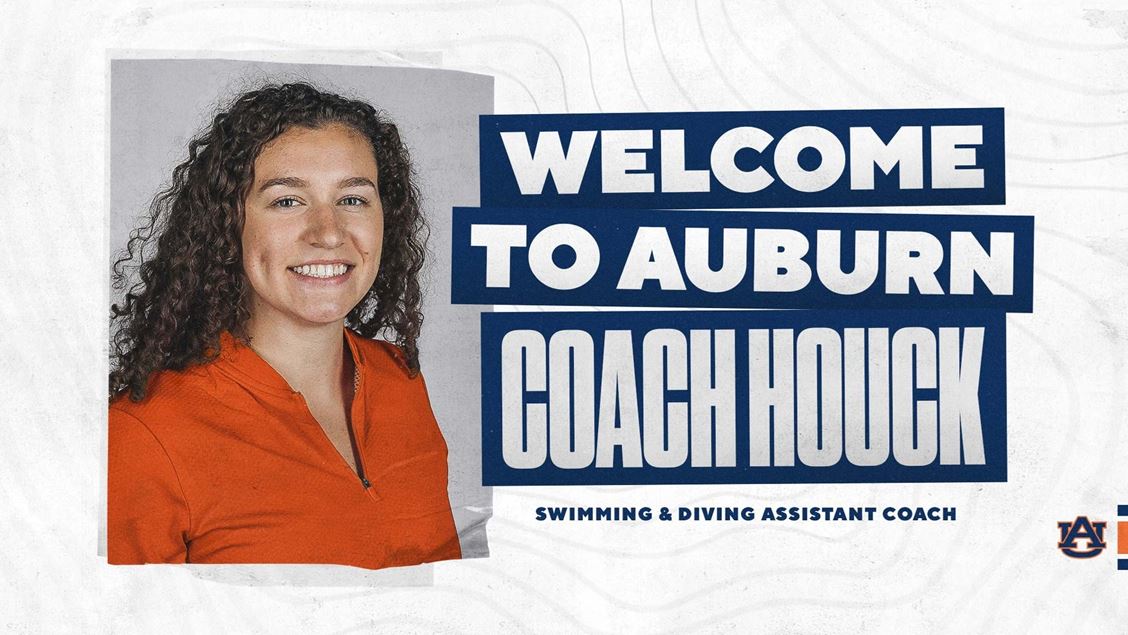 Abbie Houck spent the last two seasons as an assistant coach at the University of Houston, where she worked with Auburn's new head coach Ryan Wochomurka. Archive photo via Auburn Athletics

Auburn University has announced the hiring of Abbie Houck as a new assistant swimming coach. She’s the first announced assistant coach for the program, which is rebuilding its staff under new head swimming & diving coach Ryan Wochomurka, who was announced two weeks ago.

Houck will come with Wochomurka from Houston, where she worked as his assistant for the last 2 seasons, where the Cougars won their 4th and 5th straight AAC conference championships.

Prior to that, she spent the 2018-2019 season as assistant coach and women’s recruiting coordinator at IUPUI, and in the season before that as a student assistant at her alma mater Louisville. Outside of the NCAA, she spent a year working with the Louisville-attached Cardinal Aquatics, and as the head swim coach at Westport Middle School.

It was Louisville where the two first connected, where Houck earned 4 varsity letters, earned two NCAA All-American awards, and was a team captain as a senior. Houck swam there from 2013 through 2017, and Wochomurka was an assistant coach there from 2007 through 2015.

During her junior season, Houck scored 59 points at the ACC Championships as a finalist in the 500 Freestyle, 200 Freestyle and 200 Butterfly. Houck also swam on the 400 Freestyle Relay, helping the Cardinals close out the event in fourth place.

Houck closed out her collegiate career with another appearance at the NCAA Championships competing in the 200 Freestyle and 200 Butterfly. Earning CSCAA First Team All-America honors and All-ACC Academic team honors.

The Colorado native swam for the North Jeffco Swim team, is a Colorado State Champion in the 500 Freestyle and a five time All-American in the 200 and 400 Freestyle. Houck graduated in from the University of Louisville in 2017 with a Bachelor’s of Science in sport administration.

Houck is the first announced hire for Wochomurka at Auburn, and he will have 3 more swimming spots to fill. They’ll work to rebuild a program that, for the first time since the 1980s, scored no points at either the men’s or women’s NCAA Championship meet in 2021.

Great to bring along a proven assistant. Good hire

Great to see Auburn announce a woman on staff as the first assistant announcement. Now we wait to see if South Carolina will be coached entirely by men.

Welcome to Auburn, Abbie! Like that she’s young and female, hopefully she’s a good fit for the program.