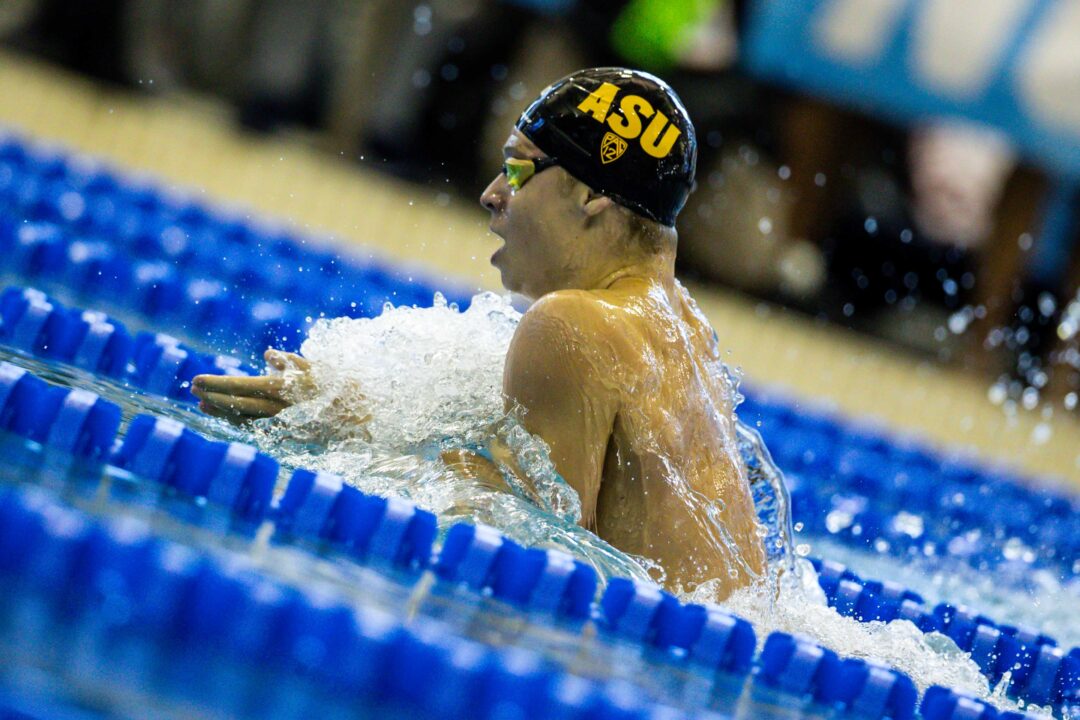 After dropping a dual against UGA that featured eclectic events like 150s of stroke yesterday, the ASU men came out firing on Saturday. They swept their duals against Georgia and Missouri, improving to 2-1 on the season.

House finished the long course season on a high, posting multiple lifetime SCM bests at Australia’s Short Course Championships. He seems to have kept that momentum through the first part of the NCAA season–his 47.42 100 IM at ASU’s pentathlon is the sixth fastest in history.

UGA also dominated the men’s 500 freestyle, going 1-2-3-4. Fifth-year Andrew Abruzzo finished first in 4:23.56, well ahead of teammate Jake Magahey, the 2022 NCAA runner-up in this event, who clocked 4:29.10. Magahey won the 500 at NCAAs as a freshman; with both Kieran Smith and Matt Sates gone from the NCAA, he’s a major threat to reclaim the title.

After he shattered Ryan Murphy‘s 100 back American record with a 43.35 leading off the 400 medley relay, many are excited to see what Luca Urlando can do in the individual event. We’ll have to wait a little longer, because while he dropped a 21.77 50 back leading off the 200 medley relay today, he stuck to the fly events individually. After finishing second to Marchand in the 200 with a 1:44.54, he won the 100 fly in 46.55.

Missouri got a huge boost when Jack Dahlgren signed on for a fifth-year. His best finishes Saturday were third in the 200 free (1:36.67) and the 200 back (1:44.87). It was senior breaststroker Ben Patton who came away with Missouri’s only win in the pool, edging out John Heaphy to win the 100 breast in 55.28. With Danny Kovac graduated, these two will be the driving force for the Tigers this season. Carlo Lopez grabbed their other win of the day, on the 3-meter board.

The Georgia women were dominant Saturday morning, winning all but three events: the 200 IM, 400 freestyle relay, and 1-meter diving. They got started with a win in the women’s 200 medley relay, with Marie Schobel, Zoie Hartman, Callie Dickinson, and Eboni McCarty posting 1:39.18 for the win.

That’s a positive sign for the Georgia women, especially Hartman, who was well off her bests in her signature breaststroke events last season. For context, Hartman’s best time in the 200 breast is 2:05.05, but her 2021-2022 season best was 2:07.71. If she can get back down to her best, that would be a huge boost for a retooling Georgia team.

Another strong sign for them was sophomore Abby McCulloh‘s performances. McCulloh swept the distance events, winning the 500 free in 4:47.90 and the 1000 in 9:46.48. McCulloh scored 15 individual NCAA points for the Dawgs last season, placing 16th in the 500 and 5th in the mile.

ASU upset Georgia’s winning streak in the pool, taking the wins in the 200 IM and the 400 freestyle relay. Sophomore Emma Gehlert grabbed the win in the 200 IM, touching in 2:04.24, edging out teammate Jade Foelske by .14 seconds. Hartman posted the fastest time with a 2:00.82, but was swimming exhibition as the Dawgs had already locked up the meet.

Missouri’s lone win of the day came in diving, where fifth-year Sarah Rousseau tallied 278.50 points. Missouri is feeling the loss of sprinter Sarah Thompson, who finished her fifth-year last season. They’re in a bit of a rebuild as they look to recreate her 78.5 individual SEC points. Nevertheless, they were able to hold on for a win against ASU, despite a late push from the Sun Devils.

I swear, every year, October gets faster and faster. SwimSwam needs to do an article on early season speed year to year.

Who is the head coach at Georgia now?

Mizzou’s got some work to do

Georgia may have exhibition the 400fr relay but we all saw that 53 anchor split 👀 They must pick their relay legs blindfolded out of a swim cap.

If you weren’t there you may not know what happened… goggles came off the swimmer. How about a little grace unless you know for sure.

mind boggling that grant house is still in the NCAA. i swear dude has been in NCAA since 2017

He benefited from the entire ASU team taking a redshirt year and then the NCAA awarding swimmers a 5th year due to Covid.

He took a redshirt year before ASU took that entire redshirt year too right? Like the 2019-2020 season to train for when Tokyo was originally supposed to happen