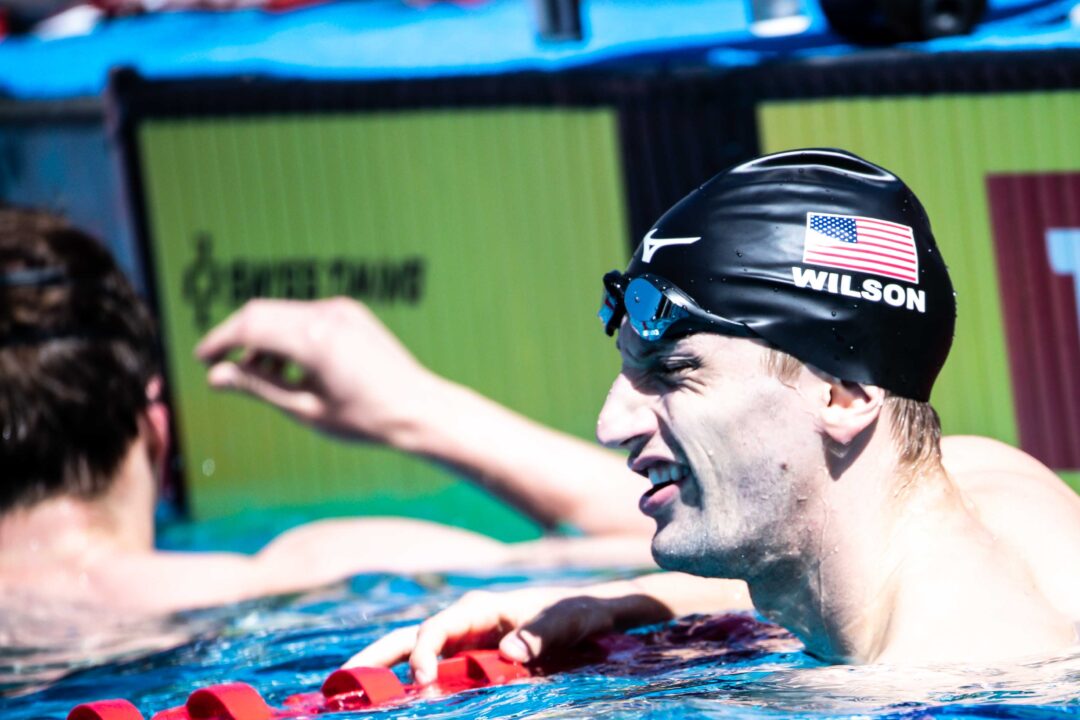 The 27-year-old swimming out of Athens Bulldogs clocked a new personal best of 58.80 in this morning's prelims, taking the 2nd spot for tonight's semifinals. Stock photo via Jack Spitser/Spitser Photography

With all the excitement swirling around Michael Andrew‘s massive 58.19 100 breast American Record this morning, we don’t want to let Andrew Wilson‘s performance get lost in the fold. The 27-year-old swimming out of Athens Bulldogs clocked a new personal best of 58.80 in this morning’s prelims, taking the 2nd spot for tonight’s semifinals.

Wilson’s swim was a lifetime best, in prelims no less, and moves him up to #3 all-time amongst Americans. he now sits behind only new American Record-holder Michael Andrew, and the previous AR-holder, Kevin Cordes. Here is the newly updated list of the top 5 Americans all-time in the 100 breast:

Moving into a broader perspective on the men’s 100 breast at these Trials, it should be noted that the 4 fastest Americans all-time in the event are at this meet, and will each be racing in semifinals tonight.

Wilson has now put himself in a favorable position, for tonight, of course, but also in the final on Monday night. Michael Andrew is now the obvious favorite in the race, but the only other swimmer in the field who has been faster than Wilson is Kevin Cordes. Cordes, however, wasn’t under 1:00 this morning, and hasn’t swum under 59 in the event since the 2017 World Champs. Similarly, 2016 Olympic Cody Miller has been 58.8 before too, but hasn’t been under 59 seconds in the event since the 2016 Olympics.

I’m not surprised, especially given his insta. The man has been putting in work moving some weight around

Would this be the first D3 guy to ever qualify individually? I think Jim Born was close relay wise but this would be historic. I mean I know Eddie s done some great work with him, but was 59 mid short course coming out of HS. Jon Howell is awesome

Who are you to decide when someone retires?

I think if he repeats that time in all 3 rounds he makes the team. Just gotta not choke in finals

Whatever the final results of the 100, Wilson sets himself up really well for the 200. He had the fastest 2nd 50 of the field.

He and Fink both looked really good, from the vets perspective I thinks it’s going to be some combo of Wilson Fink and Licon for the 200