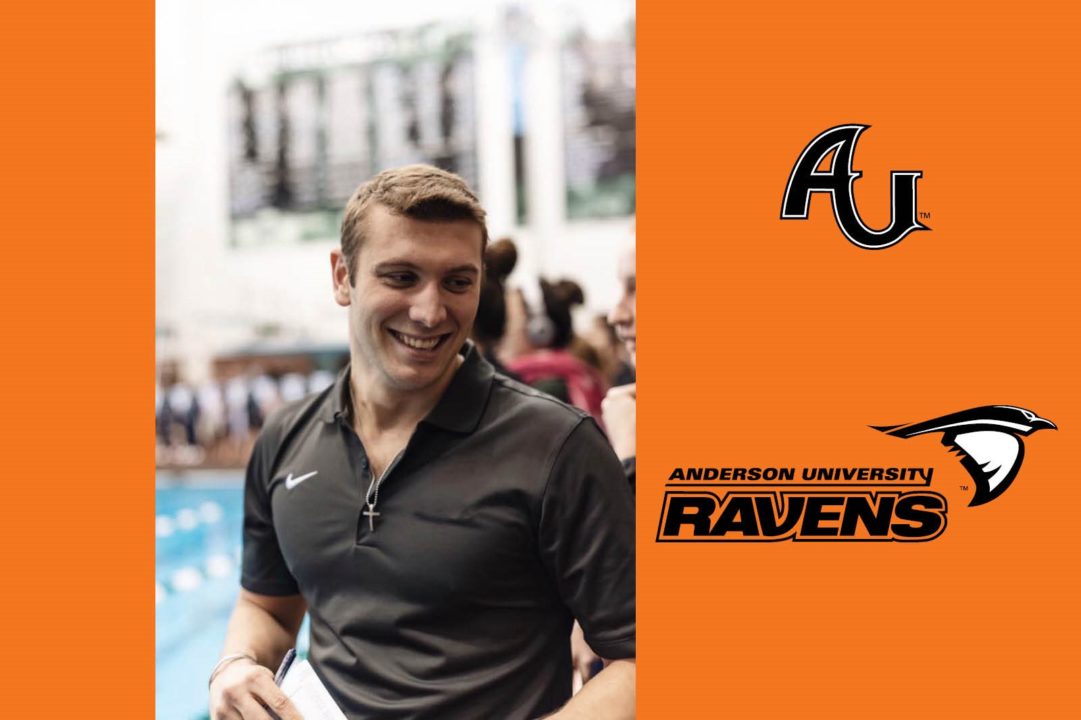 Anderson University announced that Tanner Barton has been selected as the next head swimming and diving coach. Current photo via Anderson Athletics

Kean University head coach Chris Swenson has announced the nine newcomers who will be joining the Cougar women’s swim & dive team in 2022-23.

Brownell comes to Albion with a wealth of experience, including spending the last five years at Olivet College.

Anderson University announced that Tanner Barton has been selected as the next head swimming and diving coach.

Barton joins the Ravens after spending the 2018-19 season as an assistant coach at Cleveland State University.

“I’m excited to bring Coach Tanner Barton on board to lead the men’s and women’s swimming and diving teams,” said Anderson Athletic Director Marcie Taylor. “Tanner’s prior coaching and recruiting experience, coupled with a strong desire to mentor student-athletes in their faith and rigorous academic accountability make him uniquely qualified to build upon the solid foundation already in place.”

Barton is looking forward to becoming a part of Anderson while embracing the elements of faith, academics and athletics that Anderson represents.

“I am extremely excited and blessed to be leading the Anderson University men’s and women’s swimming and diving programs,” Barton acknowledged. “I want to extend sincere thanks to President John Pistole, Athletic Director Marcie Taylor and the search committee for entrusting me to lead these programs. I am grateful to be coaching at an institution that integrates spiritual development with real-world readiness. In my role as head coach, I will ensure members of the swimming and diving program are servant leaders while striving to better themselves spiritually, academically and athletically.”

Anderson completed the program’s third season. The women’s team locked up third place in the Heartland Collegiate Athletic Conference (HCAC) Championships while the men’s team took fourth in the conference meet. One of the challenges that Barton is ready to take on is adding the diving component to the program.

“I am also humbled to be starting the diving program at Anderson University. While the formation of the diving program will not be completed overnight, the University and I are committed to this endeavor. Securing commitments from prospective divers will diversify and enhance the student-athlete population here at AU; moreover, it will strengthen our program as we compete in the Heartland Collegiate Athletic Conference.”

As an assistant coach at Cleveland State, Barton served as the primary coach for 19 athletes, leading the stroke-specific and middle-distance. Barton oversaw the academic development and progress for all 64 student-athletes. He contributed to the Viking recruiting effort and also coordinated the team’s travel logistics. In the 2019 Horizon League Championships, Barton helped the Cleveland State men’s team earn second.

Outside of collegiate athletics, Barton served as the assistant coach for Cardinal Swimming Indiana at the U.S. Master’s level in 2018. He has also represented the Dublin Atlantic Dolphins as a coach for the past six years, including the past four years as head coach.

Barton competed with Ball State University for four years and was selected as a team captain for his junior and senior years. In the Mid-American Conference (MAC) Championships, Barton represented the Cardinals in the 200-yard butterfly four times. Barton secured 12th as a freshman, sophomore and senior while earning 15th as a junior. His 200-butterfly time of 1 minute, 50.09 seconds ranks second all-time in Ball State history. Barton also provided relay support, taking sixth in the MAC Championships in both the 400 freestyle relay and the 800 freestyle relay as a junior. He was a representative of the MAC Council of Student Athletes as well as Ball State’s Student-Athlete Advisory Council.

As a senior, Barton garnered the Bob James Memorial Award, which is awarded to the MAC male student-athlete of the year. Barton was one of 29 male student-athletes in the nation to receive the NCAA Postgraduate Scholarship for winter sports. Ball State also honored Barton with the Provost’s Prize for Outstanding Senior. Barton was named both a MAC Distinguished Scholar Athlete and a first-team academic all-MAC selection as a sophomore, junior and senior. He also received the Caring Cardinal Award as a junior.

In addition to coaching and swimming, Barton has developed a high-level of knowledge in the field of diabetes. Barton serves as an international spokesperson for JDRF and advocate for type 1 diabetes.  As a member of the JDRF Speakers Bureau, Barton travels across the country raising awareness, providing research updates and instilling hope in those living with type 1 diabetes.  He has presented on six occasions in Copenhagen, Denmark. In his travels to Copenhagen, Barton assists in enhancing diabetes patient centricity in pharmaceutical processes. Barton also speaks on how to excel as a student-athlete with type 1 diabetes.

“I would be remiss if I failed to thank God who alone is my Savior and my strength. I am also incredibly grateful for my experiences at Ball State University and Cleveland State University. The opportunities I had within each Athletic Department have given me the preparation I need to embark on this new chapter. The guidance and support from my coaching mentors, namely Bob Thomas, Paul Graham and Dave Kuck, have been instrumental in my coaching journey. Lastly, I want to personally thank my parents, Tim and Andrea, and my sister, Brittanee, for being my biggest supporters in and out of the pool.”