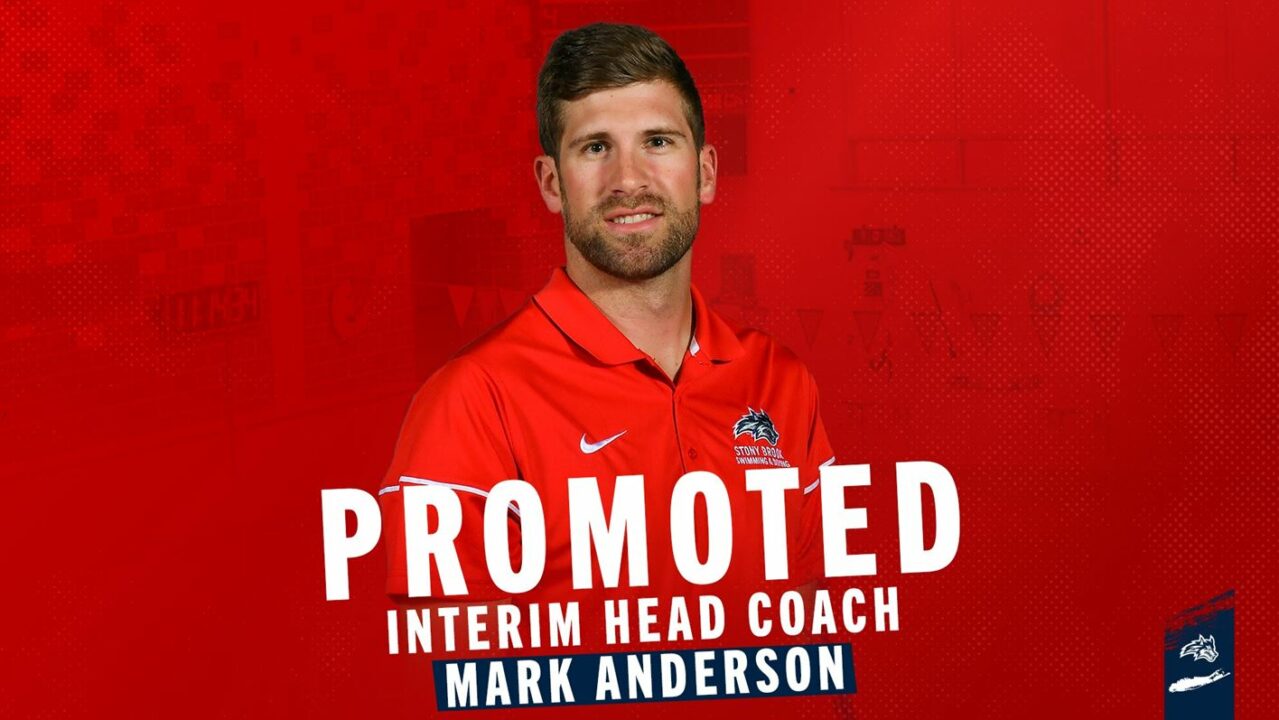 Anderson will lead the program in its fifth season since its competitive hiatus ended with the start of the 2017-18 campaign.  Current photo via Stony Brook Athletics

STONY BROOK, N.Y. — Since he stepped onto campus, Mark Anderson has made an impact on the Stony Brook swimming and diving program.

Thirteen years later, he is leading it.

The Seawolves alum has been promoted to interim head coach for the 2021-22 campaign, Director of Athletics Shawn Heilbron announced on Wednesday. He will lead the program in its fifth season since its competitive hiatus ended with the start of the 2017-18 campaign.

“As an alum, Mark has a tremendous appreciation for the program’s history and is extremely well prepared to lead our women this year,” Heilbron said. “I look forward to our team’s continued growth under his guidance.”

The program’s growth was showcased during the America East Championship this April, during which freshmen and sophomores helped lead the Seawolves to a pair of podium finishes during the 200 free and 400 medley relays. Briana Liew, Lara Youssef and Mary Kate Conway, all freshmen, joined sophomore Emma Waechter to earn bronze in the 200 free, while Yousseff, Conway and another freshman, Reagan MacDonald, joined sophomore Amanda Heinz to earn bronze during the 400 medley relay.

“Stony Brook has held a special place in my heart since I first stepped onto campus as a freshman in 2008,” Anderson said. “Since then, the friendships I’ve made and lessons I’ve learned have helped make me into the coach I am today. It’s an honor to lead this talented group of young women!”

In his first year with the Seawolves during the 2019-20 campaign, he made an immediate impact, helping three swimmers who went on to earn ‘A’ final appearances at the America East Championships, including eventual 100 fly champion Michal Liberman. She also broke the school record in the race and ECAC Winter Championship record.

Anderson is also the head coach at Three Village Swim Club in East Setauket, N.Y., where he has worked since 2012. Anderson has also been a coach at The University of Michigan’s Wolverine Swim camp, learning from influential coaches such as Bob Bowman, Jon Urbanchek, Mike Bottom, Mark Hill, and Jim Richardson.

Anderson swam collegiately for the Seawolves under coaches Dave Alexander and Chris Brandenberger, earning his degree in Environmental Health and Safety in 2013.

Congratulations, Mark. We love having a coach with club roots leading a college team.