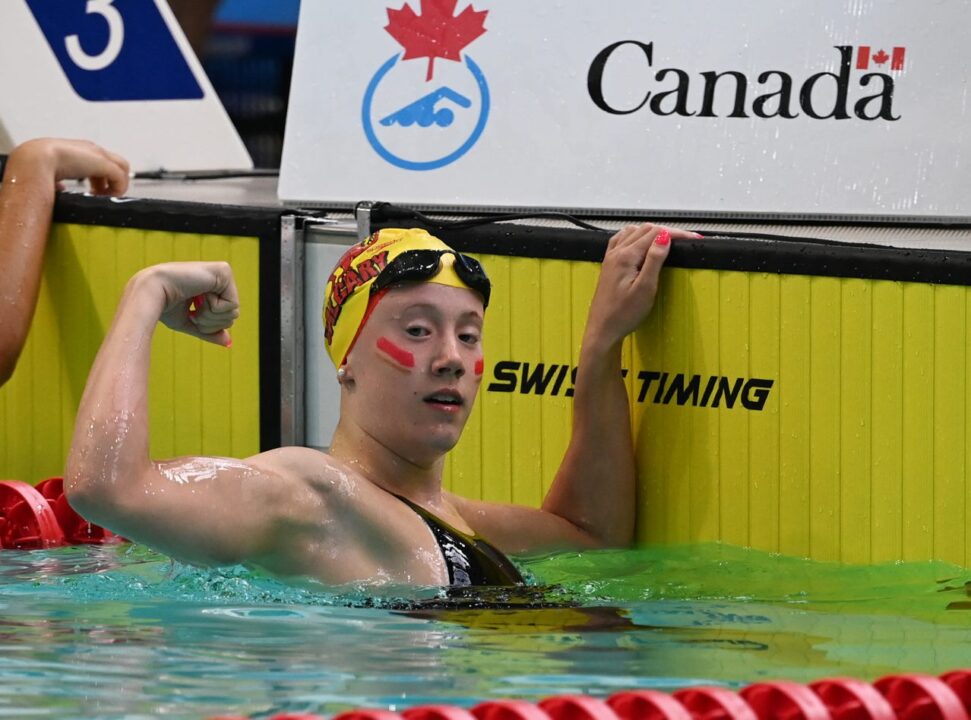 Kamryn Cannings won the girls' 200 free in the 15-17 age group on Wednesday, her second individual win of the meet so far. Archive photo via Courtesy Swimming Canada/Scott Grant

Brooklyn Douthwright dipped under two minutes in the 200 free for the first time this year, and Canada’s next wave of talent continued to shine on day 3 of the 2022 Speedo Canadian Junior & Senior Championships.

With most of the country’s top swimmers off racing at the Commonwealth Games, there is plenty of room for new faces to top the podiums at this week’s meet in Montreal.

Cannings’ swim moves her up to 18th place all-time among Canadian 16-year olds in the event.

The 50 meter breaststroke races on Wednesday were swum as a single combined open age group. In the women’s race, it was 16-year old Alexanne Lepage who won in 32.01. She topped a very competitive field that saw the top 8 swimmers all at 32.6 or better.

The men’s race was won by UBC swimmer Justice Migneault in 28.34. That lopped 1.3 seconds off his previous personal best. He picked up a win in the 100 breast earlier in the meet, though that swim wasn’t a best time.

Further down the 50 breaststroke rankings, 20-year old Brayden Hemeon swam 29.28 to break his second Saskatchewan provincial record of the meet. He also cleared the 100 breaststroke record, twice. In the 50, he placed .03 seconds ahead of his younger brother Ethan to claim the record.

There was one Canadian Age Group Record broken on the night. Laon Kim from the Hyack Swim Club in British Columbia won the 13-14 boys’ 800 free in 8:23.15, which took more than two seconds off the old record. The prior mark of 8:25.83 was set by Charlie Kwinter of Etobicoke in 2019. Read more about that record-setting swim here.

Other Day 3 Winners and Highlights: