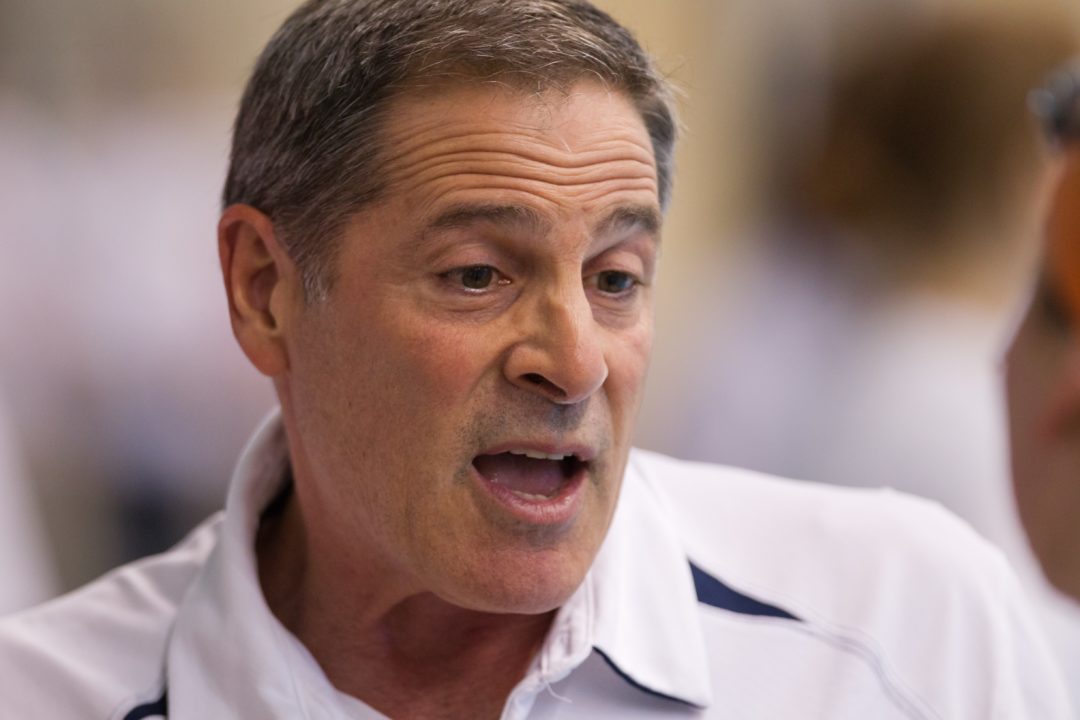 In a stunning turn, Virginia head coach Mark Bernardino, the most successful coach of the last decade in the ACC, has announced his retirement as of July 1st. This news comes on the heels of corresponding news that two of his assistants had left the program for other jobs.

Bernardino put two swimmers on the 2012 Olympic Team, Lauren Perdue and Matt McLean, and as of a sweep in 2013, has won more ACC titles than any coach in history.

As his team’s continued more success at the ACC level, their NCAA scoring slipped over the last few seasons, including an 18th place finish from the women and a 27th-place finish from the men in 2013. Still, both men’s and women’s programs were riding 6-consecutive ACC Championships.

Both programs have some very high-profile recruits coming in for the new staff, including Leah Smith and Kaitlyn Jones on the women’s side and Andrea D’Arrigo on the men’s side.

See the full press release from the University of Virginia below.

“Today, after 35 years as the head coach of the men’s and women’s swimming and diving teams at the University of Virginia – in total 41 years, including my time as a student, athlete and assistant coach – I am announcing my retirement,” Bernardino said. “It is a difficult day filled with mixed emotions and I have not come to this decision lightly. This job and this University, along with my family, have been my life and my passion for nearly as long as I can remember. But I come to this decision with confidence in the future.”

Bernardino was Virginia’s longest-tenured head coach, leading the Cavalier swimming and diving programs for 35 years, and was only the second head coach of the women’s program. He guided UVa to 27 Atlantic Coast Conference championships, the most in ACC swimming and diving history. His 16 men’s conference titles are also an ACC record and the 11 women’s championships rank second in conference history.

In 2013, both the Cavalier men’s and women’s programs won ACC championships for the sixth consecutive season, the first time the feat has been accomplished by an ACC school.

Bernardino completed his career as one of the NCAA’s all-time leaders in swimming and diving dual meet wins.

“I want to thank Coach Bernardino for his service to the University and his contributions to the Department of Athletics’ success,” said Virginia Director of Athletics Craig Littlepage. “Mark’s career is one that will be difficult to be equaled and is notable for the competitive success of his teams and student-athletes, and also the academic achievements of his student-athletes.

“Coach Bernardino has not only won more ACC titles but he has also won more ACC Coach of the Year honors than any UVa head coach. He and his teams have set a standard of success that is exemplary.”

Beyond the conference realm, Bernardino mentored at least one Cavalier to every Summer Olympic Games since the 1996 Atlanta Games, where Melanie Valerio won gold with the U.S. women’s 4×100-meter freestyle relay. Ed Moses earned gold with the U.S. men’s 4x100m medley relay and silver in the 100m breaststroke in 2000 in Athens, Greece, while Lauren Perdue and Matt McLean continued the gold medal tradition in 2012 in London, earning first-place finishes with the U.S. women’s and men’s 4x200m freestyle relays, respectively.

Under Bernardino’s guidance, 18 student-athletes earned ACC Swimmer of the Year honors for a total of 26 times and 16 first-years were named ACC Freshman of the Year. Furthermore, Bernardino was named ACC Coach of the Year 31 times, 18 on the men’s side and 13 on the women’s.

Both programs experienced academic success under Bernardino’s tutelage. The women’s team has been named a Collegiate Swimming Coaches Association of America (CSCAA) All-Academic squad 19 consecutive years and the men have been honored 13 times in that span. He coached four CoSIDA Academic All-Americans, 13 ACC Scholar-Athletes of the Year and 19 ACC Post-Graduate Scholarship winners.

He was honored in May of 2010 by the University of Virginia as one of three recipients of the Algernon Sydney Sullivan Award, presented to individuals for excellence of character and service to humanity. Also in 2010, the Raven Society, UVa’s oldest honorary society, presented Bernardino with the Raven Award, the society’s highest honor given to an individual for excellence in service and contribution to the University of Virginia.

A national search for a new head coach will begin immediately.

huge announcement. huge. marks pay was way up there for college coaches. this will be a highly sought after vacancy

Theres definitely more to this story

Two assistants and the head coach who has been there for more than three decades gone in rapid succession? There has to be more than this.