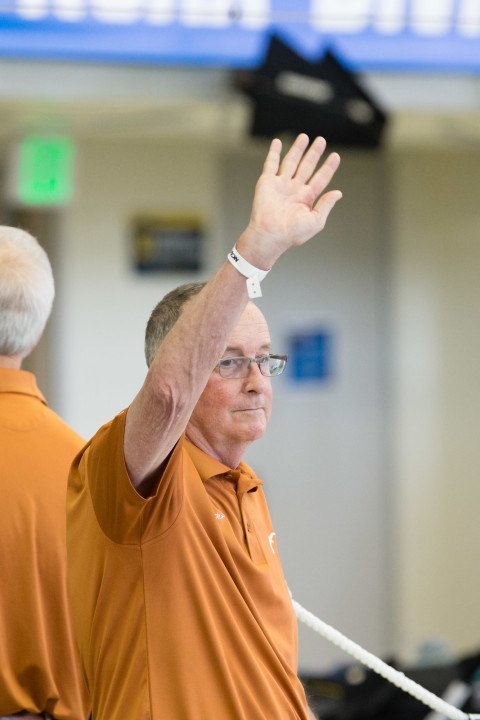 After winning his NCAA-record 15th team points title, University of Texas swim coaching legend Eddie Reese is retiring. That marks the end of a 43-year stint in Austin.

“Where we are today and where I am today is made possible by everyone who has swum here before and is swimming here now,” Reese said in Texas’s press release this afternoon. “They are such a big part of the success of this program. When people get together with the mindset of accomplishing something, even though it is tough during that year in time, it just adds up to something truly amazing. I want to thank those guys who trusted me, did all the hard workouts and made the sacrifices in and out of the water. It has been an honor for me to be a part of this program.”

“I am going to be a coach emeritus. That means I can still help and I want to do that. It’s important for all of us. Working with swimmers has been one of the true joys of my life, and I definitely want to keep doing that. In my long life, I’ve discovered that the most important thing for us to do in this world is help others, whether it be for something simple or complex. Coaching allows me to do that.”

Texas says that for the time being, assistant coach Wyatt Collins will take over as interim head coach, with Reese remaining in an “emeritus role.” Reese will continue to coach through this summer’s Tokyo Olympics, when his retirement will become official.

Texas held a press conference with Reese – here are a few of the more notable quotes:

Asked who the next coach of the program would be – Reese: “I’ve got a real good feeling on it. But it’s not happening until after Trials.”

“I had made the decision to retire before the meet, regardless of the outcome,” Reese said. But the team didn’t know that it was his last NCAA meet.

Reese implied his “emeritus” role would still be hands-on when it came to coaching practices: “I’ve said for years that if I can just go to practice and not go to meets, I could coach ‘til I’m 100. So as long as my mind is good, my jokes are good, I’m going to keep doing it. My jokes are always good.”

Reese mentioned his excitement to work with incoming freshman classes in the future. He also mentioned that he’d be working with both Texas programs – the women and the men.

On what his assistants, Kris Kubik and Wyatt Collins, have brought to the program:

“Kris and Wyatt both have got a gift for reading faces. They know when somebody needs to be pulled aside and talked to. Assistant coaches always hear more than the head coach, which is a good thing. They handle those problems with the athlete in mind first.

“Secondly, they did a phenomenal job of taking care of me.

I wonder if it’s a coincidence his grandson was a senior this year. Was probably pretty cool to coach him all 4 years of his college career

And in his last year and his grandson’s senior year, he left him home, did not play favorites. How many coaches would do that?

Absolute legend. Thanks for everything you did for the sport Eddie!

Congratulations to Coach Reese! A truly amazing career, and he deserves a wonderful vacation. I’m sure the Texas swimmers are happy he’ll still be around in a small way volunteering (at least it sounds like he’ll be doing that)

The discussion isn’t about him being the GOAT of sun coaches. It’s a debate about best college coach ever. Coach Wooden, Coach Reese, who else goes on that Mt Rushmore?

Dan Gable and Geno Auriemma. Pat Summit would be next if I could take a fifth.

Would be a crime to not include David Marsh on the mountain. Man has 12 NCAA titles with Auburn.

I can’t think of any other coach where I have never read or heard a single negative thing about them. Eddie is truly a coaching legend amongst all sports and an outstanding human being. Congratulations Eddie!