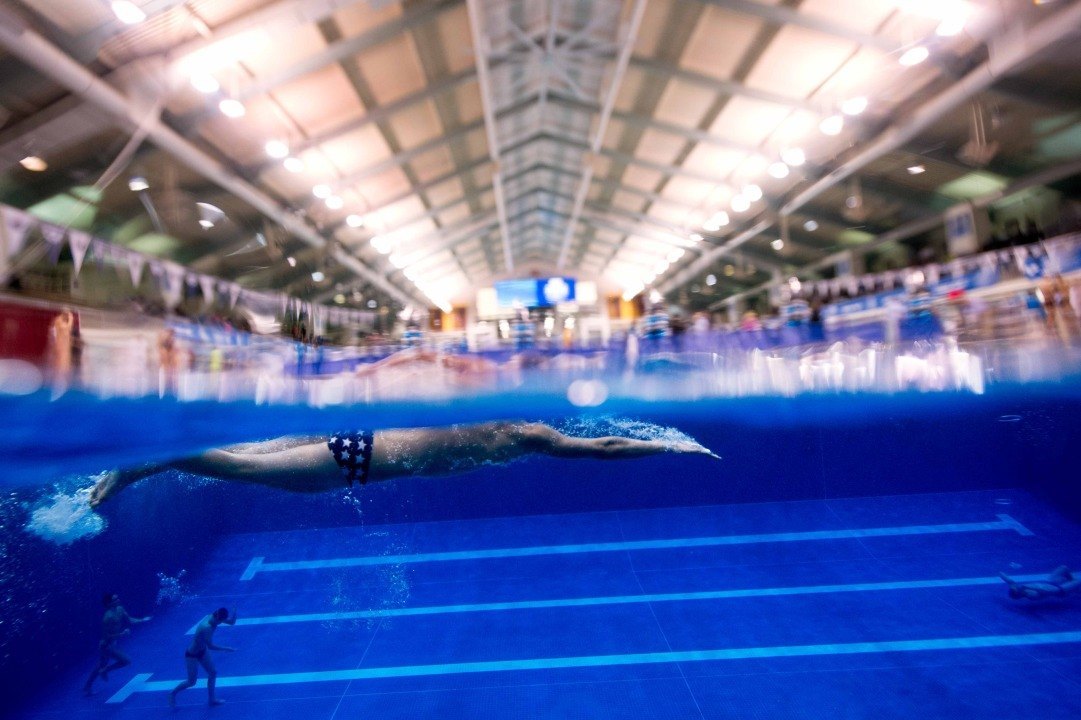 During the hard Holiday Training Sessions try these practices from the book GAMES-GIMMICKS-CHALLENGES for Swimming Coaches. The book is a GREAT GIFT FOR YOUR COACHES from swimmmers that want to have fun.

Equipment: foam alphabet letters and a plastic bucket. Makeup a holiday phrase with the alphabet.  Make it HARD!   For instance for Christmas your phrase could be “Deck the Halls”.  Place the foam letters in the buckets at the end of the pool (one bucket for each lane).  Each swimmer swims down and picks one letter, then swims back. The last swimmer puts the bucket on their head and swim back to the start indicating they’re done.  The first team to figure out the phrase is the winner.

Have all swimmers buy a $3 grab bag gift at Goodwill, Salvation Army, or a thrift store. At the team Christmas party have all squads sit together in a circle on the deck. Swimmers exchange gifts and go around the circle opening their gifts. Once all gifts are opened have the swimmers go around the circle three times taking turns rolling 2 dice.  If a swimmer rolls a pair , 7 or 11 they get to give their gift to someone else in the circle and take that person’s gift. At the end of the game swimmers may trade with anyone.

Sets associated with Christmas songs are placed in a Christmas stocking and drawn out one at a time. Silent Night equals 10×25 underwater. Scrooge Strikes Again equals 10 x 100 (fly/free by 25). Sleigh Ride equals 10×25 (partner pulling by 25).

Use an electronic dartboard with safe plastic tips ($20) and use a Sharpie to modify it if you need to.  Each lane picks their set by throwing 3 darts. One person throws all 3 darts and the set has to be done by the whole lane.  After the set, the next person throws 3 darts…until everyone has had a chance to throw. All lanes are on their own throughout the workout doing the sets they get from the dartboard.

Dart #3 – Use the Sharpie to write different strokes.  Every other panel (all the black panels) is Freestyle.  The rest of the 10 panels write –  Pull, Kick, Breast, Back, Fly, Fins, Fun, Choice, IM, and Drill.  Fun is corkscrew, relay, or something else you can make-up on the spot.

For the most part the sets are small so they can get through several of them.  Some are easier than others. Modify as needed to make sure the sets are not too cruel. For example, if someone accidentally throws a super hard one (i.e. 20×100 Fly) you can choose to give them 1 dart to throw over for a different repeat, length, stroke.   Kids choose which one.

Below is a bonus set courtesy of Orinda Aquatics:

Bob Steele – a member of the USA-Swimming Master Coach/Consultant Program. He has coached at all levels with 19 swimmers world ranked in 41 events, two American Record Holders, five NCAA ll Team Championships, seven NCAA II Record Holders and six National Independent Championship teams.   Retired after 46 years of coaching, he has conducted USA-S Team Excellence Camps for 173 teams having a world ranked underclass swimmer with a fine coaching staff and team, teaching and challenging swimmers to realize what it takes to “Be the Best They Can Be”, and helping parents understand their supporting role and coaches to try new things. His book GAMES-GIMMICKS-CHALLENGES for Swimming Coaches is a swimmer and coach favorite in 32 countries.

The best holiday practice I ever did was technically not Christmas, but it’s around the same time so whatever. We had a Festivus practice that went something like this: We gathered around the Festivus pole (any of the four lane line poles) for the Airing of Grievances, where we were given two minutes to complain to the coach about whatever we wanted. Then we had feats of strength, which we turned into a contest where points are awarded by place for each event. The events were stuff like one minute of push ups, farthest dive-and-glide, fastest underwater 25 from a dive, fastest 25 running on the pool bottom, fastest 15m time, 200 yard fin kick for time, etc. Sadly, I… Read more »

0
0
Reply
Couldn't Do This Today

Three Holiday favorites we did way back in the day but are probably not in “GAMES-GIMMICKS-CHALLENGES for Swimming Coaches”: 1) Similar to the dart board practice – coach wrote sets on balloons, then placed balloons on a dart board with the easiest balloon sets near the bulls eye. Unlike the safe plastic tipped darts, we used a BB gun to pop the balloons and determine the set we swam. Mind you, this was inside on the pool deck at the local high school. 2) Between-set pull buoy fight where the object was to race around the pool deck and throw pull buoys at teammates, with extra credit for any shot to the face/head/neck. Deemed to be “safer” than kick board… Read more »