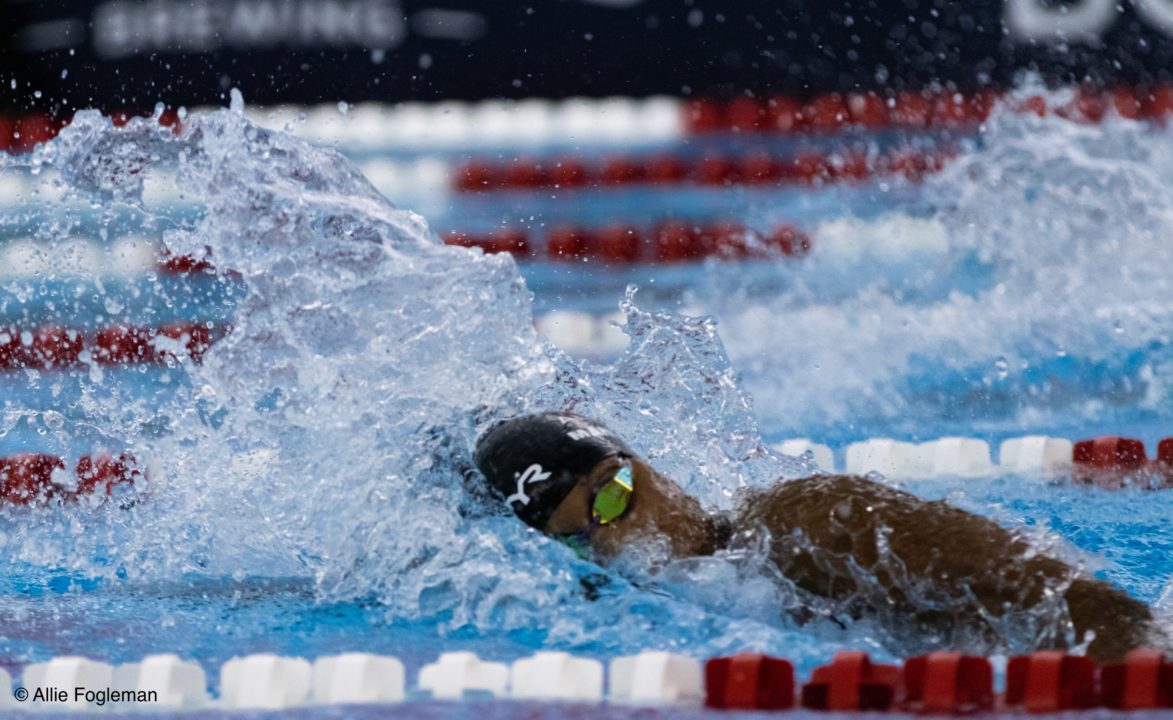 Katie Ledecky was the author of four of the top ten swims of the weekend, ranked by FINA Points.

Handily winning her only final of the night was Longhorn’s Madisyn Cox, clocking in a sub-2:11 effort of 2:10.84 to take the win over a stacked field

Easily winning his signature event was Ryan Murphy, clocking in the top time of 53.56, .01 off his season-best of 53.55 from the January Pro Swim

The Pro Swim Series resumes this week in San Antonio, the second stop of the series. Here are four storylines to watch:

Two of the top swimmers on the planet, Stanford pros Simone Manuel and Katie Ledecky are set to swim their first full long course meets in nearly a full year.

Ledecky competed at last year’s March Pro Swim Series event, going 1:54.5, 3:59.6 and 15:29.5 in the 200, 400, and 1500 freestyles. That was just weeks before the coronavirus pandemic spread across the globe and rapidly shut down swimming competitions. Since last March, Ledecky has swum just three official races per USA Swimming’s database – two short course yard swims as an exhibition swimmer at the Cal/Stanford dual in November, and then an 8:16 in the 800 free one week later at the Stanford Invite.

Same goes for Manuel, who swam times of 24.5, 53.5 and 1:56.9 last March, before swimming just three races in the year since. (Like Ledecky, she swam two short course yards events at the Cal/Stanford meet, and a long course 100 free of 53.3 one week later).

After nearly a full year away, fans should be clamoring to see the return of two multi-time Olympic and World champs who should combine for a sizable pile of gold medals at this summer’s Olympics.

The U.S. can select up to six men to its Olympic team for the 100 free, with four swimming various legs of the 4×100 free relay and two swimming individually. Almost all of the top contenders will be competing this week.

Just making the 100 free final at U.S. Olympic Trials will be a feat this summer, with plenty more than eight strong candidates.

Caeleb Dressel is the clear favorite, coming off back-to-back World titles. He’ll be one of the headliners in San Antonio this week after a historic ISL season. But behind him, the field is stacked with contenders.

Ryan Held had an explosive 2019, going 47.39 at Summer Nationals as most of the top American swimmers competed at major international meets. Among them: World University Games champ Zach Apple and runner-up Tate Jackson. Harvard standout Dean Farris, who split 47.4 on a World University Games relay. World champs fourth-placer Blake Pieroni, who was .06 out of a World Champs medal individually while splitting 47.4 on a winning relay. Nathan Adrian, who split 47.0 to anchor the winning Worlds relay. And Maxime Rooney, then a Texas Longhorn collegiate swimmer who went 47.6 in domestic competition.

All of those guys are on the psych sheet for San Antonio this week in a preview of perhaps the most-anticipated race of U.S. Olympic Trials.

3. Regan Smith Returns To the Spotlight

After 2019, Regan Smith looked on track to be the next American swimming superstar. The coronavirus pandemic has been a cloud in front of her rising star, though. After an early 2020 that had Smith on track to win the Pro Swim Series with a near-world-record in the 100 back, Smith had to defer her enrollment to Stanford amid the pandemic, and also missed the ISL spotlight as she maintained her collegiate eligibility.

Smith did crush the U.S. Open in November, but now gets another opportunity to sparkle in the national spotlight. The 19-year-old from Riptide is entered in five events (100 back, 200 back, 100 fly, 200 fly, 100 free), and has realistic chances to hit world-leading times in several of those events – not to mention the ever-present threat of a world record for a swimmer who has hit 58s in the 100 back with ease.

Also worth watching: how Smith responds to the warning shots fired by young Australian backstroker Kaylee McKeown, who leads the world for 2021 with times of 58.69 and 2:05.51 from January.

For both men and women, the IM events offer plenty of intrigue: who will swim those events at Olympic Trials and who will qualify for the Olympic team?

For the men, there’s former world champ Chase Kalisz who has mostly slumped since winning double world titles in 2017. Olympic hero Ryan Lochte is in the mix, trying to continue his Olympic career at the age of 36. And versatile sprint star Michael Andrew was breaking through in the 200 IM before the coronavirus pandemic shut things down, and he gets a shot at that event again this week.

For the women, backstroke world record-setter Kathleen Baker has also been one of the nation’s top 200 IMers, and could contend for an Olympic spot there if she’s willing to expand her lineup. Meanwhile Melanie Margalis has been a stalwart in both IMs, though at one point it looked like she was pivoting away from the 400 IM. She hasn’t swum a long course 400 IM since last March, when she blasted a 4:32.5 and instantly retook the role as U.S. Olympic frontrunner.

Bonus: We’re adding this one on to our four main storylines, if only because it’s not clear yet whether these athletes will scratch or compete. But a number of top college men are entered in the Pro Swim Series meet, particularly from the Pac-12. The Pac-12 Men’s Swimming Championships are happening this week, through tomorrow night, and the college men are entered in the Pro Swim Series events starting the very next morning. With the Pac-12 meet happening in Houston and the Pro Swim Series being in San Antonio, it’s possible some college teams are actually planning to stay in Texas for the rest of the week to get some long course racing in before Olympic Trials. If that group does race, it’ll have plenty of significance for fans of long course swimming and for more NCAA-centric fans hoping to see how primed Cal’s top athletes were for Pac-12s.

In addition, Cal’s Jason Louser has been absent from meets this year at the college level, but is entered in the San Antonio meet.

Excited to watch Regan and see where she is at compared to last March. Don’t count her out!

Any idea if they will be allowing spectators since the Texas governor has lifted the Covid restrictions?

Doesn’t go into effect until next wednesday

Why doesn’t Curzan compete at any of these meets?

Her parents are both doctors (dad Orthopedist, mom ER physician), so traveling at the present moment is probably not high on their to-do list right now (remember: she’s fast, but is still a minor). Could just be another layer of stress to a family that is probably feeling a lot of it already from the pandemic.

Given that she can get a solid level of competition in her home pool and race almost whenever she wants (they’ve hosted a ton of meets), that’s probably what I’d do too given the circumstances.